Like the Fort Hood jihad massacre and virtually all such attacks and attempted attacks these days, the car bomb discovered in Times Square Saturday was initially dismissed as having nothing to do with terrorism. The New York Times reported: “A federal official said it was not considered a terrorist threat and that the New York Police Department had told the Department of Homeland Security to stand down.” 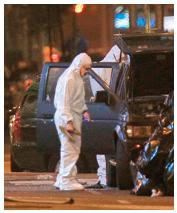 Soon, however, the weight of evidence became too great for officials to sustain this wishful thinking. New York City Police Commissioner Ray Kelly said: “I think the intent was to cause a significant ball of fire.”’ New York Governor David Paterson declared the incident an “act of terrorism.” Homeland Security Secretary Janet Napolitano revealed on Meet the Press that the car bomb was being treated as a “potential terrorist attack.”

Napolitano offered no hint as to which terrorists might have done it: “It’s too soon to tell who was responsible.” New York City Mayor Michael Bloomberg was just as puzzled: “We have no idea who did this or why.”

Yet for all this official agnosticism, there were a number of clues – and even a group claiming credit. The explosives-laden car was found on 45th Street between 7th and 8th – not far from the offices of Viacom, which owns Comedy Central. Comedy Central, of course, presents South Park, the irreverent cartoon series that recently lampooned Islam’s prophet Muhammad. After the show aired, the jihadist website RevolutionMuslim.com posted this threat against the creators of South Park, Matt Stone and Trey Parker:

“We have to warn Matt and Trey that what they are doing is stupid and they will probably wind up like Theo Van Gogh for airing this show. This is not a threat, but a warning of the reality of what will likely happen to them.”

Theo Van Gogh was brutally murdered by a Muslim on an Amsterdam street in the middle of the day in November 2004 after he made a film, Submission, about the oppression of Muslim women. Younus Abullah Muhammad of RevolutionMuslim.com told journalist Aaron Klein Sunday that the car bomb was “a retaliation for what your government is doing overseas. If you want to continue killing civilians, then you’re going to get many incidents that resemble what happened yesterday.” Not that RevolutionMuslim.com was claiming responsibility:

“We do not condone nor condemn terrorism. There is no relation between our organization and these attacks.” However, “there will be a lot more terror attacks in the United States.”

Younus Abullah Muhammad’s denial of responsibility notwithstanding, have authorities questioned the owners of RevolutionMuslim.com about this attempt to explode a car bomb outside Viacom’s offices?

Meanwhile, the Pakistani Taliban rushed to claim responsibility, releasing a video calling the botched attack a “jaw-breaking blow to Satan’s USA.” Sounding much like Younus Abdullah Muhammad, a Taliban spokesman said that the attempted car bomb was revenge for American “interference and terrorism in Muslim countries, especially in Pakistan.” American officials, however, said there was no evidence to back up this claim, and Bloomberg added: “So far, there is no evidence that any of this has anything to do with one of the recognized terrorist organizations.”

Still, even if no Muslim group had anything to do with the car bomb, it was noteworthy that only Muslim groups went on record praising it as a good thing. Recently I have received an increased number of emails and Facebook messages from Muslims telling me that I have completely misunderstood Islam and jihad, and that Islam is in fact the Religion of Peace of fable and fantasy. The only problem with all such messages, and with various windy pseudo-academic “refutations” of explanations by me and others of Islam’s doctrines of warfare against unbelievers and their subjugation under Sharia, is that however good they sound on paper, somehow the last people to be convinced seem to be Muslims themselves – Muslims like Younus Abdullah Muhammad and the Pakistani Taliban spokesman who claimed responsibility for the car bomb.

Somehow Muslims like those two – and there are untold numbers of others like them around the globe — seem to have missed the memo about Islam’s vaunted respect and tolerance for non-Muslims. And Younus Abdullah Muhammad and other Muslims like him can and do point to Qur’anic verses enjoining violence against unbelievers in order to justify bombings and all manner of murder and mayhem – for Muslims are to “fight those of the disbelievers who are near to you, and let them find harshness in you” (Qur’an 9:123).

Until such the ways in which jihad violence and supremacism is rooted in Islamic texts and teachings is studied openly by law enforcement and intelligence officials, we will see many more jihad attacks in the U.S. – and some will be successful. For the belief system that motivates them is being neither challenged nor even examined. While officials in this case had to revise their initial dismissal of terrorism as a factor, they have never reexamined or reevaluated their dismissal of any need to understand Islam in order to understand jihadis and how they can be stopped.

And so they are not being stopped, except when we get lucky, as we did Saturday night in Times Square. But our luck is unlikely to hold forever.