Jean-Claude Trichet, the president of the European Central Bank, has called for global governance of all financial institutions saying it is extremely necessary if the world wants to prevent another financial crisis like what is happening today. Trichet emphasized that politicians, economists, and financiers must work together and collaborate on methods to create an international set of standards and that through this global governance the resiliency of the global financial system can be assured.

This call for global governance of all financial operations - even national governments - has been motivated by the economic problems of Greece and many other European nations as well as the United States. 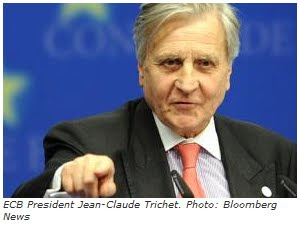 A call for global governance of all worldwide financial operations by the president of Europe's central bank is a precursor to the end times scenario that can be found in Bible prophecy.

At the height of the present world economic crisis there were many world leaders calling for an international economic structure to be put in place. Even though many world leaders say we are better off today financially, there are also many who doubt we can come back. The recent bailout of Greece with a record breaking total of 146 billion dollars is evidence that this world still is in bad shape economically. European economists say Greece was only the tip of the iceberg and that Spain, Portugal, and Italy may be next to fall financially with Great Britain and even the United States who could also follow suit.

This call for global governance of all financial operations is setting the stage for the prophetic scenario that can be found in the book of Revelation. Revelation 18 foretells of a one world economic structure that will be in place in the last half of the seven year Tribulation period and it will be headquartered in Babylon located in modern-day Iraq. The world leader - the Antichrist - will require all who want to buy or sell, in other words, to sustain life, they will be required to have an identification mark on their forehead or the back of their hand (Revelation 13:16-17). It seems very possible that a worldwide economic crisis could cause humankind to take this mark under an economic global governance. Bible prophecy will be fulfilled.