By John MacArthur
Grace to You

John Ankerberg and John Weldon point out that matter, time, and chance constitute the evolutionists' holy trinity. Indeed, these three things are all that is eternal and omnipotent in the evolutionary scheme: matter, time, and chance. Together they have formed the cosmos as we know it. And they have usurped God in the evolutionist's mind. Ankerberg and Weldon quote Jacques Monod, 1965 Nobel Prize-winner for his work in biochemistry. In his book Chance and Necessity, Monod wrote,

"[Man] is alone in the universe's unfeeling immensity, out of which he emerged by chance. .. . Chance alone is at the source of every innovation, of all creation in the biosphere. Pure chance, absolutely free but blind, [is] at the very root of the stupendous edifice of evolution."

Obviously, that is a far cry from being created in the image of God. It is also utterly irrational. The evolutionary idea not only strips man of his dignity and his value, but it also eliminates the ground of his rationality. Because if everything happens by chance, then in the ultimate sense, nothing can possibly have any real purpose or meaning. And it's hard to think of any philosophical starting point that is more irrational than that.

But a moment's reflection will reveal that chance simply cannot be the cause of anything (much less the cause of everything). Chance is not a force. The only legitimate sense of the word chance has to do with mathematical probability. If you flip a coin again and again, quotients of mathematical probability suggest that it will land tails-up about fifty times out of a hundred. Thus we say that when you flip a coin, there's a fifty-fifty "chance" it will come up tails.

Yet in naturalistic and evolutionary parlance, "chance" becomes something that determines what happens in the absence of any other cause or design. Consider Jacques Monod's remark again:

"Chance ... is at the source of every innovation, of all creation."

In effect, naturalists have imputed to chance the ability to cause and determine what occurs. And that is an irrational concept. 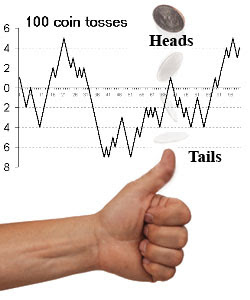 There are no uncaused events. Every effect is determined by some cause. Even the flip of a coin simply cannot occur without a definite cause. And common sense tells us that whether the coin comes up heads or tails is also determined by something. A number of factors (including the precise amount of force with which the coin is flipped and the distance it must fall before hitting the ground) determine the number of revolutions and bounces it makes before landing on one side or the other. Although the forces that determine the flip of a coin may be impossible for us to control precisely, it is those forces, not "chance," that determines whether we get heads or tails. What may appear totally random and undetermined to us is nonetheless definitively determined by something. It is not caused by mere chance, because chance simply does not exist as a force or a cause. Chance is nothing.

Fortune was a goddess in the Greek pantheon. Evolutionists have enshrined chance in a similar way. They have taken the myth of chance and made it responsible for all that happens. Chance has been transformed into a force of causal power, so that nothing is the cause of everything. What could be more irrational than that? It turns all of reality into sheer chaos. It therefore makes everything irrational and incoherent.

The entire concept is so fraught with problems from a rational and philosophical viewpoint that one hardly knows where to begin. But let's begin at the beginning. Where did matter come from in the first place? The naturalist would have to say either that all matter is eternal, or that everything appeared by chance out of nothing. The latter option is clearly irrational.

But suppose the naturalist opts to believe that matter is eternal. An obvious question arises: What caused the first event that originally set the evolutionary process in motion? The only answer available to the naturalist is that chance made it happen. It literally came out of nowhere. No one and nothing made it happen. That, too, is clearly irrational.

So in order to avoid that dilemma, some naturalists assume an eternal chain of random events that operate on the material universe. They end up with an eternal but constantly changing material universe governed by an endless chain of purely random events — all culminating in magnificent design without a designer, and everything happening without any ultimate cause. At the end of the day, it is still irrational. It evacuates purpose, destiny, and meaning from everything in the universe. And it therefore leaves no ground for anything rational.

In other words, nihilism is the only philosophy that works with naturalism. Nihilism is a philosophy that says everything is entirely without meaning, without logic, without reason. The universe itself is incoherent and irrational. Reason has been deposed by pure chance.

And such a view of chance is the polar opposite of reason. Common-sense logic suggests that every watch has a watchmaker. Every building has a builder. Every structure has an architect. Every arrangement has a plan. Every plan has a designer. And every design has a purpose. We see the universe, infinitely more complex than any watch and infinitely greater than any manmade structure, and it is natural to conclude that Someone infinitely powerful and infinitely intelligent made it.

"For since the creation of the world His invisible attributes, His eternal power and divine nature, have been clearly seen, being understood through what has been made" (Romans 1:20, NASB).

But naturalists look at the universe, and despite all the intricate marvels it holds, they conclude no one made it. Chance brought it about. It happened by accident. That is not logical. It is absurd.

Abandon logic and you are left with pure nonsense. In many ways the naturalists' deification of chance is worse than all the various myths of other false religions, because it obliterates all meaning and sense from everything. But it is, once again, pure religion of the most pagan variety, requiring a spiritually fatal leap of faith into an abyss of utter irrationality. It is the age-old religion of fools (Psalm 14:1) — but in modern, "scientific" dress.

What could prompt anyone to embrace such a system? Why would someone opt for a world-view that eliminates all that is rational? It boils down to the sheer love of sin. People want to be comfortable in their sin, and there is no way to do that without eliminating God. Get rid of God, and you erase all fear of the consequences of sin. So even though sheer irrationality is ultimately the only viable alternative to the God of Scripture, multitudes have opted for irrationality just so they could live guilt-free and shamelessly with their own sin. It is as simple as that.

What is the Anthropic Principle? - GotQuestions.org

Evolution and the Bible - Institute for Creation Research (Henry Morris)

The Battle for the Beginning - John F. MacArthur (Book)