Iran's military preparations and defiant rhetoric are again raising tensions in the Middle East, making military action all the more likely. Whether Iran acts first, or provokes Israel to take pre-emptive measures, the region is moving closer to conflict.

Iran last week started Velayat-89, an eight-day war game, to display its defensive and deterrent naval power. Iranian Adm. Qassem Rostamabadi said the aim of the exercise is to showcase Iran’s strength in controlling maritime routes through the Strait of Hormuz. And it kicks off just days after the Islamic Revolutionary Guards Corps (IRGC) completed major war games near the strait, during which it tested missiles and a new speedboat capable of destroying enemy ships. 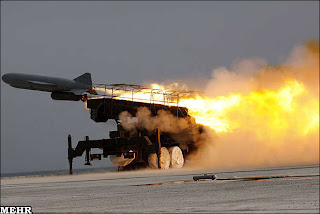 Those war games reflect Iran’s desire to flex its military muscle as tensions rise over the regime’s nuclear program. Secretary of Defense Robert Gates said, “Iran is combining ballistic and cruise missiles, anti-ship missiles, mines, and swarming speedboats in order to challenge our naval power in that region.”

Israel has long assumed that any military action it took against Iran’s nuclear program would draw a response from Iran’s terror proxy, Hezbollah. But the reverse is just as likely – Iran could give Hezbollah the green light to launch a pre-emptive attack to sideline Jerusalem’s anti-nuclear attack plans. There is plenty of evidence Hezbollah is ready for that order.

War drums began beating faster recently, amid growing allegations that Iran’s ally Syria supplied Hezbollah with Scud missiles capable of carrying a chemical warhead and reaching Israel. This is especially alarming when coupled with a report from the Kuwaiti newspaper al-Siyasa that chemical weapons are in Lebanon, along with Israel’s decision in April to provide gas masks to every citizen, according to Arutz Sheva, an Israeli media network.

Secretary Gates confirmed last month that Hezbollah has “far more rockets and missiles [perhaps 60,000] than most governments in the world …. This is obviously destabilizing for the whole region.” That explains why President Obama just renewed sanctions on Syria for “continuing support for terrorist organizations and pursuit of weapons of mass destruction and missile programs.”

These war preparations compliment Tehran’s defiant rhetoric. Iranian President Mahmoud Ahmadinejad came to the United Nations’ Nuclear Non-Proliferation Treaty conference in New York City last week to face his accusers who threaten a fourth round of sanctions over Tehran’s lack of cooperation on its nuclear program. Ahmadinejad used that forum to lash out at the U.S., accusing it of being the “main suspect” in fostering a nuclear arms race and reminded the world that America was the first and only state to use a nuclear bomb. Ahmadinejad said new sanctions would “mean relations between Iran and the U.S. will never be improved again.”

The regime refuses to make a good-faith effort to prove it isn’t seeking atomic weapons, despite significant contrary evidence. And the UN is considering a fourth round of “tough” sanctions which will certainly be vetoed by China, an Iranian oil-consuming ally and supplier of ballistic missiles.

That leaves the West two options: accept a nuclear-armed Tehran or conduct a military strike that at best delays Iran’s atomic weapons program. President Obama’s choice appears to be to do nothing, as he seems to be at the mercy of Tehran.

Obama is vulnerable because Iran is leveraging our wars and the flow of oil through the Strait of Hormuz.

Afghanistan is also under Tehran’s sway, according to the Pentagon’s April 2010 “Report on Progress Toward Security and Stability in Afghanistan.” “Iran continues to actively attempt to influence events in Afghanistan” and could disrupt Obama’s plans to begin withdrawing our forces next summer.

The increased tensions give rise to varying scenarios.

Tehran could shut down the Strait of Hormuz either through intimidation or military action. Oil prices would spike in either case which would hurt an already troubled global economy and especially the U.S.

That’s why Tehran believes Obama will do whatever is necessary to keep Israel from striking Iran, not because he cares about the Jewish nation, but because he doesn’t want America to be drawn into another war.

But Israel is not unaware of Iran’s intent and calculus and is suspicious of Obama’s reliability. That’s why we should not be surprised if Israel pre-empts Hezbollah before Iran gives its proxy the green light. Perhaps the final question is, who will attack whom first and what will those who are not attacked do next?