For thus says the LORD: “Behold, I will extend peace to her like a river, and the glory of the Gentiles like a flowing stream. Then you shall feed; On her sides shall you be carried, and be dandled on her knees. As one whom his mother comforts, so I will comfort you; And you shall be comforted in Jerusalem.” (Isaiah 66: 10-13)

Children from across the nation descended on Jerusalem Tuesday – filling the parks, crowding the sidewalks, clambering up the slopes of Mount Zion and flooding in through the gates of the Old City.

Their presence added reams of youthful color and vibrancy to the many-thousand-strong crowds of Jews and their friends here to celebrate 43 years (by the Hebrew Calendar) since the Six Day War saw their ancient capital returned to Jewish hands. 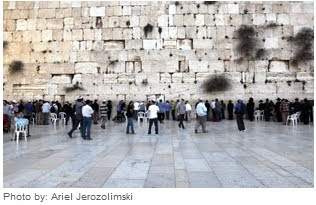 And it will be festive: The next 24 hours will be marked by ceremonies and speeches on Ammunition Hill and in the Tower of David, hora dancing in the city’s public squares, marches through the streets, all night music concerts and prayer meetings at the Western Wall.

Organized tours will show off the massive development and growth that has taken place in the city under Israeli sovereignty. Modern high-rises, new residential developments and ambitious transportation projects will vie for attention with the famous historical sites and legendary biblical landmarks that make Jerusalem an engrossing magnet for millions, nay billions on the planet.

But while it enthralls multitudes – there is only one nation that loves this city, only one people that has longed to return here and remained faithful in devotion to Jerusalem for thousands and thousands of years.

The Jews’ veneration of Jerusalem hugely outstrips the feelings any other nation has for its capital. This can be said without exaggeration or apology.

Which other people has acclaimed a single city for 30 solid centuries – or even a third of that time? What city has Chinese or Russians or Britons, or Norwegians or Indians or Africans or any other nation or people group prayed daily for generation after generation to return to? What other nation – violently driven from its land, and enduring hundreds of years of what it calls “captivity” in exile – clung to, and drew hope from, their belief in their ultimate restoration to that land, and to the pulsating city that was its heart?

Indeed, the return of the Jews to Jerusalem, followed by the return of Jerusalem to the Jews, should be reason for rejoicing by all men and women of goodwill.

But as music fills the air and drumbeats echo off the golden walls across the valley from my home, people in other capitals around the world are watching these celebrations through glowering, resentful, even hate-filled eyes.

Jerusalem Day 2010 has been preceded by intensifying gentile efforts to force Israel to stop building here. Spearheaded by the increasingly openly hostile Obama administration, the international community is galled by the “effrontery” of Jews’ administering, developing and growing their own flagship city.

Israel’s claim to Jerusalem flies in the face of the world’s plans to turn half the city into the capital of a new Arab state called Palestine. Instead of acknowledging that Muslim violence, threats and incitement against Jews is the primary reason for the failure of their “peace process,” the world blames the Israeli government for building up its own home.

As I write, US special envoy George Mitchell is here, trying to get some form of shuttle diplomacy underway in order to “jump start” the repeatedly discredited diplomatic process with the Palestinian Arabs.

In an attempt to get some traction, Mitchell claimed last week that the Israeli government had agreed to freeze building in northern Jerusalem for two years. Prime Minister Benjamin Netanyahu and Jerusalem Mayor Nir Barkat have denied that there is any freeze on construction in the city.

As Israel tries to resist the pressures of its “friend and ally” across the Atlantic, Washington – which has realigned the once pro-Israel United States with the Arab/Islamic world – is expected to get nasty.

Let it. The superglue of their entire history holds the Jews to Jerusalem. Any nation trying to remove it from them will only injure itself.

Rejoice with Jerusalem - all you who love her!

Obama to Abbas: I am committed to creation of Palestinian state - Ha'aretz