Were you aware of the National Health Crisis facing America's children? It's awful. America's children are too well-fed! Just look at those little tubs of lard waddling off to school every morning. No wonder Michelle Obama formed a Task Force to investigate this crisis.

The review by the Task Force on Childhood Obesity says one out of every three children is overweight or obese. The task force is a key part of Michelle Obama's campaign to solve the problem of obesity within a generation. 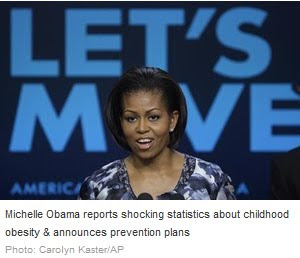 She really needn't bother worrying herself with it - her husband will solve the child obesity crisis as an unexpected benefit of his social policies.

As his various social policies mature, any American childhood obesity crisis will self-correct - for the same reasons child obesity isn't a crisis in the President's native Kenya.

Ethanol isn't made from oil. Ethanol is made from food. A lot of food. The amount of food necessary to create the biofuel to run ONE SUV for a year is enough to feed twenty-six people, according to one UN official.

UN Special Rapporteur for the Right to Food Jean Ziegler warned that the world was heading "towards a very long period of riots" and other types of conflicts stemming from food shortages and price increases. Ziegler called biofuel production 'a crime against humanity.'

One-sixth of all the grain grown in the United States this year will be "industrial corn" destined to be converted into ethanol and burned in cars.

The production of crops for fuel, or energy farming, competes with food production for land, for water and for fertilizer.

Hunger and malnutrition rose by more than 100 million last year. Every six seconds somewhere in the world a child dies of hunger-related diseases. That's more than five million children a year.

The White House has been pushing hard for its cap-and-trade bill that would create a sort of 'stock market' except instead of trading in stocks and bonds, the 'commodity' for sale will be air. That's what a carbon credit is - permission to use more than what the government decides is your fair share of air.

Obama said that under the cap and trade bill, "electricity rates would necessarily skyrocket" but its the price we have to pay for clean air. Cap and trade in its latest incarnation is sponsored by Joe Lieberman and John Kerry, so you know its going to be good for America!

Cap-and-trade enriches companies by granting them free allowances to sell that which they pay nothing to obtain. If they get it for free and then can sell it for profit, isn't that like creating wealth?

That's what the White House would like for you to believe. (It's harder to pick a man's pocket when he knows that's what you are doing).

The wealth 'created' by cap-and-trade goes to Third World countries to 'compensate' them for our gluttonous energy consumption and to help them develop their own clean energy projects.

But this cap-and-trade wealth isn't being created - it is simply being transferred out of your pocket and into somebody else's. It is estimated that domestic energy prices will at least double - and whatever money the corporations and government officials can't steal is to be transferred to the Third World.

But thanks to the Child Obesity Health Care Crisis, the inevitable food shortages caused by increasing the costs of food production - while diverting the rest to biofuel will actually be beneficial. It will help avert a Child Obesity CRISIS!

And the one thing we really don't need to deal with is another crisis. Look at how many crises we already have in the oven.

The word has been used so often to describe so many situations that it has lost all relevant meaning.

The dictionary defines "crisis" thusly: "a critical point or state of affairs, an unstable condition, as in political, social, or economic affairs, involving an impending abrupt or decisive change."

Rahm Emmanuel defines "crisis" as "too good an opportunity to go to waste." So at the White House, everything is an unstable crisis demanding abrupt and decisive change. That's how most of the legislation of the last 18 months got through Congress without anybody reading it.

Michelle Obama's "crisis" - like all the rest of them, requires massive, immediate government intervention.

"We have a roadmap for implementing our plan across our government and across the country," Michelle Obama told reporters today. "No one gets off the hook on this one from governments to schools, corporations to non-profits all the way down to families sitting around their dinner table."

She said she would "focus my energy" to keep the issue at "the forefront of the discussion in society." (Gee,that sounds healthy. Let's focus all our energy on talking about the fat kids.)

Michell's task force suggests the FCC should consider new rules on commercials in children's programming. It also challenges food retailers to stop using in-store displays to sell unhealthy food items to children. The government, presumably, will be the final authority on what is 'healthy' for children.

(Maybe we could convert some of the non-performing schools into fat farms?) But wait! There's more!

Michelle wants the FDA and USDA to 'cooperate with' (translation: 'dictate to') the food and beverage industries to develop a standard system of nutrition labeling on the front of packages.

And if the targeted food manufacturers balk at committing voluntary financial suicide, there are other ways of getting them to 'cooperate' in bringing about their own financial demise. As CBS News cheerfully reported:

"The task force also sees a potential pocketbook approach to keep people from buying unhealthy foods. It calls for analyzing the effect of imposing state and local sales taxes on less healthy products."

("Now are ya gonna cooperate voluntarily? Or am I gonna have to muss ya up?")

"The task force concludes that strategies listed in the report "should" achieve the goal of solving the childhood obesity problem within a generation."

I doubt it will take a whole generation. At the rate things are currently regressing, the childhood obesity crisis will last until Michelle creates a new task force to combat childhood hunger.

"And when he had opened the third seal, I heard the third beast say, Come and see. And I beheld, and lo a black horse; and he that sat on him had a pair of balances in his hand. And I heard a voice in the midst of the four beasts say, A measure of wheat for a penny, and three measures of barley for a penny; and see thou hurt not the oil and the wine." Revelation 6:5-6

The last thing anybody wants to waste is a good crisis.

Cap and Scam: The trouble with the new Kerry-Lieberman bill - Reason Online