Troubling issues and events churn within our hourly news. Powerful monetary exigencies, in particular, command the headlines. Total world financial collapse continues to be perhaps the most serious danger just ahead. Yet, each building economic crisis seems to be absorbed by the previous while the world financial markets adjust to avoid what many fiscal experts believe to be the inevitable.

It's as if there is a supernatural roadblock keeping the world from collapse - an otherworldly bubble insulating against implosion. The international economic end should have come, according to all reasoning, months - even years - ago. 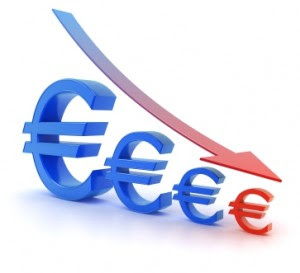 Greece is now the head of the European Union's (EU) festering economic sore that many fear could be terminal. With the euro sliding precipitously against the dollar and other currencies, the problems within the EU and, by extension, the rest of the Western economies, are exacerbated for that developing colossus that many who study Bible prophecy believe is the heart out of which will come Antichrist and his regime of absolute control.

The EU wizards of finance are on the case, trying to stop the descent into disaster.

LONDON, May 11 (Reuters) - The euro fell on Tuesday as the relief effects of an emergency aid package to prevent the spread of a European debt crisis dissipated and focus switched back to structural problems plaguing the euro zone. European Union finance ministers, central bankers and the International Monetary Fund hammered out an emergency package of loan guarantees to euro zone members over the weekend to try and sure up sentiment in its bond markets and the euro. ...The "shock and awe" plan initially boosted sentiment, allowing the euro to surge to near $1.31 on Monday, rebounding from a 14-month trough of $1.2510 hit on trading platform EBS last week when investors had feared a sovereign credit crisis could spread from Greece to other euro zone countries... Investors doubt whether the Greek government will be able to carry out the austerity measures required to restructure its public finances. Other states such as Portugal and Spain also have budgetary concerns. (Neal Armstrong, "Unconventional ECB measures to weigh on currency." [My thanks to John Stettin and John Rolls.])

It is not too much of a stretch to consider that because the desired unity of European nations is built around a once ballyhooed but now failing currency, we might be witnessing the construction of the feet and toes of the metallic man-image Daniel the prophet interpreted for Babylonian King Nebuchadnezzar concerning the king's dream-vision. The euro isn't working; the EU nations, put in simplistic terms, don't trust each other. Here's what Daniel was given to prophesy about the very end of the history of world kingdoms:

And whereas thou sawest the feet and toes, part of potters' clay, and part of iron, the kingdom shall be divided; but there shall be in it of the strength of the iron, forasmuch as thou sawest the iron mixed with miry clay. And as the toes of the feet were part of iron, and part of clay, so the kingdom shall be partly strong, and partly broken. And whereas thou sawest iron mixed with miry clay, they shall mingle themselves with the seed of men: but they shall not cleave one to another, even as iron is not mixed with clay. (Dan 2: 41-43)

The United States is still the center of world power so far as concerns the Western world. America's president, whose mercurial efforts to change U.S. economic structure in every possible way - catastrophically, in my opinion - is directly intervening in Europe's monetary manipulations. Mr. Obama's extensive talks by phone with French President Nicolas Sarkozy and German Chancellor Angela Merkel are believed to be perhaps the primary catalysts behind the €750 billion bailout agreed over the weekend by the eurozone leaders.

The gigantic multi-trillion dollar Band-Aids that the American administration, aided and abetted by a strangely acquiescent Congress, has pasted over the gaping economic wound from which the U.S. is suffering hasn't worked. Yet, the Europeans seem to be anxious to follow Obama's failed regiment of treatment. This could be because it will be the already bankrupt American taxpayers who will be expected to contribute mightily to the EU bailout.

The American president recently said in his "New Foundations" speech that he wants prosperity - not fueled by reckless debt, but by skilled, productive workers. He wants sustained growth, not economic stagnation. Yet the policies he now twists the arms of European leaders to adopt continue to demonstratively prove destructive to prosperity. His calamitous policies continue to be fueled by, in effect, reckless debt - nonexistent money that takes America ever deeper into an abyss of deficits.

The American and EU economies are in such a state of chaos and decline that they must find a way to bring about controls that will prevent complete, total collapse. Collapse is nonetheless inevitable unless Draconian measures are taken.

President Obama's chief of staff, Rahm Emanuel, once told a Wall Street Journal conference of top corporate chief executives, "You never want a serious crisis to go to waste." It will take such a crisis - one of unprecedented magnitude - to cause all leaders to institute those Draconian measures necessary to control all buying and selling under one system of economy.

That crisis is coming. It will be the dagger that pierces the bubble provided by God's staying hand of judgment upon this fallen world. The Rapture will, I'm convinced, produce the crisis that will clear the path for 666 (Rev. 13:16-18).