Hizbullah on the Homefront

Last week Lebanese commentator Tony Badran published an article on the Now Lebanon Web site discussing the Iranian way of war. In "The shape of things to come," he discussed the significance of the breakup of a Hizbullah cell in Kuwait and the deportation of Hizbullah agents from Bahrain. Badran explained that like the Hizbullah ring arrested last year in Egypt, the Hizbullah cells in Persian Gulf states demonstrate how Iran uses Hizbullah to extend its regional power.

Badran noted that Iran's cultivation of fifth columnists in target countries through Hizbullah puts paid to the notion that it will be possible to contain a nuclear Iran. Armed with both nuclear weapons and armed agents in states throughout the region, Iran will be well positioned to bend all regional states to its will.

US security guarantees will be worthless. Living under the threat of the Iranian bomb, neighboring states will be unable to take steps to curb Iranian agents subverting their governments from within their sovereign territory.

For Israel, the threat is obviously more acute. Whereas states like Kuwait and Bahrain will be able to suffer through an Iranian Middle Eastern hegemony, Israel will have no such luxury. Iran has made clear that in an Iranian-ruled Middle East, there will be no room for Israel. And so Israel must act soon to prevent Iran from acquiring nuclear weapons.

But then there is the homefront.

With each passing day, it becomes more and more apparent that as is the case in Kuwait, Bahrain and Egypt, through Hizbullah, Iran has established cells of sympathizers among Israeli Arabs. This means that as Israel prepares to strike Iran, it must minimize Iran's ability to retaliate from fifth column bases inside the country.

According to Badran, among the Hizbullah agents rounded up in Kuwait were several officers in the Kuwaiti military. This means that Iran/Hizbullah is not operating at the margins of Kuwaiti society. They are part of the Kuwaiti mainstream. 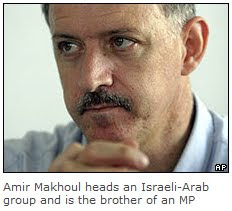 Israel faces a similar situation. Indeed, in many ways it is worse. Here Hizbullah agents are found in the top echelons of Israeli Arab society. Last week's announcement that Ameer Makhoul and Omar Said Abdo are under arrest for allegedly serving as Hizbullah agents is a case in point.

Until his arrest, Makhoul served as head of Ittijah, the umbrella organization of Israeli Arab NGOs. His brother Issam Makhoul is a former member of Knesset. Abdo is a professional organizer for the Balad political party. These men are not just leading members of the local Arab hierarchy. They are tightly connected to the Israeli and international Left as well.

Makhoul and Abdo are not unique. Former MK and Balad leader Azmi Bishara fled the country in 2007 to avoid being arrested for serving as a Hizbullah spy in the 2006 war. Bishara is suspected of transferring targeting information to Hizbullah officers.

Since the Second Lebanon War, a number of Israeli Arabs have been arrested and convicted of spying for Hizbullah. All of them were accomplished individuals from respected families.

Last month Rawi Sultani, the son of a prominent Israeli Arab attorney, was convicted of collecting intelligence information for Hizbullah concerning the whereabouts of Chief of General Staff Lt.-Gen. Gabi Ashkenazi. Sultani was a member of Ashkenazi's health club in Kfar Saba.

Sultani was drafted into the service of Hizbullah while he participated in a pan-Arab youth conference in Morocco organized by Balad.

Khaled Kashkoush was a student in Germany who promised his Hizbullah handler that he would get a job at Rambam Medical Center in Haifa. Kashkoush's plan was to develop relations with wounded soldiers hospitalized there and transfer information he gained to Hizbullah.

In 2008 Sgt.-Maj. Louai Balut, the first Christian Arab tracker to serve in the IDF, was sentenced to 11 years in jail for transferring information about troop deployments in the North to Hizbullah.

Earlier this month, MK Massoud Ghanem of the United Arab-Ta'al party gave an interview to the Nazareth newspaper Kul el-Arab in which he expressed his hope to one day see Israel destroyed and replaced with an Islamic caliphate.

Ghanem also said that in the event of war between Israel and the Iran-Syria-Hizbullah-Hamas axis, he would side with the axis. As he put it, "The Iran-Hizbullah-Syria axis represents the line of resistance and refusal to surrender, and naturally, I support this axis."

Hizbullah's popularity among Israeli Arabs has grown immensely since the Second Lebanon War. Whereas before the war, one would rarely see public displays of support, since the war Hizbullah flags are routinely flown at Israeli Arab political events and protests. Hizbullah's growing popularity goes hand in hand with a deep radicalization of Israeli Arab society that has gone largely unaddressed by state authorities.

Over the weekend, thousands of Israeli Arabs participated in so-called Nakba rallies. The Nakba, or "catastrophe," is how the Arab world refers to Israel's establishment on May 15, 1948.

Until the onset of the Oslo peace process with the PLO in 1993, May 15 was generally overlooked by Israeli Arabs. But since then, each year, commemorations of the so-called Nakba have steadily increased in scope and radicalism.

This year, the central demonstration was held in Kafr Kanna, the same Galilee town Abdo calls home. The keynote speaker at the event was Islamic Movement leader Raed Salah. His speech could easily have been given by Iranian President Mahmoud Ahmadinejad or Hizbullah chief Hassan Nasrallah.

Speaking to a crowd of thousands, Salah threatened Israel with war if it dares to take action against Arabs like Abdo and Makhoul. In his words, "If you think that with this arrest you will take revenge against political groups in our society like Balad, you are wrong. Balad, the Islamic Movement, Hadash and the Higher Arab Monitoring Committee - all share one hope, one pain, one future, and one present. Those who go against one of us, go against everyone. We are all Omar Said, we are all Ameer Makhoul."

He went on to promise that all the descendents of Arabs who left in 1948 would return. He called Israeli communities "cancers" that will be removed.

Finally, Salah called on Fatah and Hamas to unite in war against Israel:

"From here, from the Galilee, we call on you to unite against the occupation until the state of Palestine is established with Jerusalem as its capital."

Ahead of his Nakba day diatribe, last week Salah was acquitted of rioting charges. The indictment was filed against him in 2007 following a speech he gave at a demonstration in Jerusalem in which he accused Israel of seeking to destroy the Aksa Mosque on the Temple Mount.

As he waved a Syrian flag, in that speech Salah proclaimed "it is now the duty of every Arab and Muslim to launch an intifada from one end to another to save Jerusalem and the Aksa Mosque. We are not the ones who allowed ourselves to eat a meal of bread and cheese soaked in children's blood."

He was acquitted due to what Jerusalem District Court claimed were contradictions in the prosecution's testimony.

Salah's statements, like those of his colleagues in Israeli Arab leadership echelons invariably provoke angry responses from politicians. Indeed, in response to Salah's Nakba speech, on Sunday Finance Minister Yuval Steinitz called for his citizenship to be revoked.

But headline-generating statements aside, politicians and the rest of the country's leadership - including the police and the courts - have refused to actually do anything. Our leaders have failed to adopt any consistent measures to counteract the fact that today there are no Israeli Arab leaders who do not routinely make statements either rejecting the country's right to exist or inciting treason against the state, or both. Similarly, they have taken no effective measures against reports of massive arms caches in Arab villages.

In March, the sensationalist Debkafile Web site published a hair-raising report claiming that Hizbullah has raised five brigades - all trained by the Iranian Revolutionary Guards Corps - whose mission is to invade northern Israel in the next war. According to the report, one of the brigades is tasked with invading three Arab villages along the Acre-Safed highway and using them as a bridgehead to spark an armed insurrection in Arab towns throughout the North.

Debkafile's report was not sourced and was widely ignored as a consequence. But in recent weeks, several IDF sources have confirmed the gist of the story.

Over the weekend Channel 1 military correspondent Yoav Limor reported that heightened concern about war has brought near unanimity in the defense community that Israel should make a last ditch effort to negotiate the surrender of the Golan Heights to Syria in the hope of cajoling it out of the Iranian axis. If true, this position indicates that the top echelons of the security establishment are in a state of panic.

If Limor's report is accurate, our leaders need to get a hold of themselves. The times are dire, but they are not hopeless. There is no reason for anyone to lose his head.

To prevail, our leaders and security authorities need to stop talking and start acting. They need to move now to break up enemy organizations like Balad and the Islamic Movement, arrest their leaders and seize their assets. There are laws already on the books to enact such policies.

So too, the police, with assistance from the IDF if necessary, needs to uncover and seize illegal arms caches. Hostile villages like Kafr Kanna and Umm el-Fahm, and border towns like Deir el-Asad and Majd el-Kurum should be rigorously patrolled.

There is very little good news coming out of neighboring states these days. Russian President Dmitry Medvedev's visit to Syria last week raised the threat level against Israel to soaring heights amid reports that he has agreed to sell massive quantities of advanced weapons to Iran's Arab client state.

But Israel can handle this situation. We just need to start acting and stop talking.

Lebanon PM in Syria for talks with Assad - Ya Libnan