In its write-up of South Korea's statement, The Los Angeles Times assessed that South Korea's acknowledgment of North Korea's murderous aggression will return the region to the days of the Cold War. The paper quoted Prof. Kim Keun-sik from Kyungnam University outside Seoul claiming that in the period to come, North Korea and China will face off against South Korea and the US.

Sadly for South Korea, while China can be depended upon to block the passage of effective sanctions against North Korea in the UN Security Council and to take any other necessary action to protect the North Korean regime, South Korea cannot expect the US to take action to rein in North Korean aggression. For while the South Korean government acknowledged reality on Thursday morning, the US under President Barack Obama remains in reality denial mode.

It is true that on Thursday Obama released a statement saying that the "act of aggression is one more instance of North Korea's unacceptable behavior and defiance of international law." And it is true that the international media is pointing to the White House announcement as an indication that the US will stand with South Korea.

But the Obama administration's relations with China on the one hand, and its emasculation of the US Navy on the other demonstrate that the US will not defend South Korea against North Korean aggression. The administration's actions in the days leading up to South Korean President Lee Myung-bak announcement make this clear. 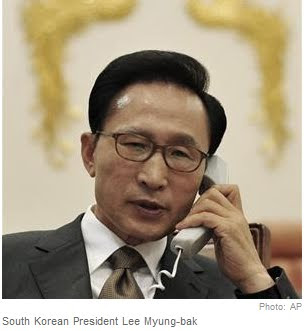 Lee reportedly told Obama on Tuesday that his government's investigation of the attack proved beyond a shred of doubt that North Korea had attacked the ship. Wednesday the State Department announced that next week Secretary of State Hillary Clinton will be making a weeklong visit to Asia. Clinton's trip includes one day in Japan, one day in South Korea and five days in China. Clinton's trip to China will center on advancing the US's aim of ensuring that China continues to finance the US's national debt. Given the US's priorities, it is impossible to imagine the White House taking any forthright action against Pyongyang.

In a related matter, the Obama administration spent the better part of the week congratulating itself for convincing China and Russia to back another sanctions resolution against North Korea's ally Iran. In what the administration is presenting as a great diplomatic victory, Beijing and Moscow agreed to back a sanctions resolution against Iran in the UN Security Council for its refusal to end its illicit uranium enrichment.

Moreover, Brazil's and Turkey's deal to enrich uranium for Iran wrecks any chance that the US will gain its sought-for unanimity in the Security Council against Iran. Even if the sanctions resolution passes, it will be Pyrrhic victory for the US which will have destroyed its credibility as a negotiator with its allies and its enemies alike.

Beyond all that, Thursday we learned that as a payoff for China's support for its toothless sanctions resolution, the Obama administration has made a deal that enables nuclear proliferation. According to the Washington Post, in exchange for China's support for the resolution, the Obama administration has turned a blind eye to Beijing's continued nuclear proliferation activities to Pakistan.

Pakistan has been a major source of nuclear and ballistic missile technologies to Iran and North Korea. Yet the administration has reportedly opted not to oppose China's decision to build two more nuclear reactors in Pakistan.

In its frenetic bid to court China whose dollars it needs to finance its massive increase in federal spending, the Obama administration has downplayed not only China's nuclear proliferation but North Korea's nuclear proliferation as well. Last week North Korea announced that it conducted a successful fusion experiment. That is, it announced that it is developing a hydrogen bomb. Rather than condemn the move, the administration dismissed the danger claiming that North Korea was lying.

And just as it makes light of the threat emanating from North Korea, so the US has continued to downplay the threat Iran's nuclear program poses to US and global security. Due to the US's failure to end Iran's uranium enrichment, according to the most optimistic Western assessments, Iran will have enough enriched uranium to produce atomic bombs at will in a matter of months.

If the Turkish-Brazilian uranium enrichment deal with Iran goes through, the timeline will be cut by half. Given the new deal's similarity to the offer Obama made the Iranians last year, the administration will have great difficulty discrediting it or even providing a coherent explanation for its opposition to the deal.

As foreign Minister Avigdor Lieberman noted in his trip to Japan earlier in the month, North Korea does not only threaten its immediate neighbors. Through its proliferation activities, and particularly through its close ties to Iran and its Syrian, Hizbullah and Hamas clients, North Korea constitutes a threat to the Middle East and indeed to global security as a whole. It is important for the US's spurned allies in Tokyo, Seoul and beyond to join forces with Israel to contend with the threats we share - threats which the Obama administration's diplomatic bungling has only exacerbated.

But while it is true that North Korea's proliferation activities threaten global security, it is also true that there is a qualitative difference between the regimes in Pyongyang and Teheran. The regime in Pyongyang is evil, but it is mainly motivated by its desire to survive. In contrast, Iran's regime is openly revolutionary. Its stated aim is to destroy the global order, annihilate Israel and the US and usher in a Shiite messianic era in which Iran will rule the world in the name of Islam.

Depressingly, just as the Iranian threat is greater than the North Korean threat, so the Obama administration's denial of the nature of the Iranian threat is greater than its denial of the North Korean threat. Quite simply, the Obama administration refuses to believe the ideology which informs the actions of Iran's rulers is what they say it is.

In its latest demonstration of its deep denial of the nature of the threat it faces, this week John Brennan, Obama's chief advisor for counterterrorism and homeland security said that the US must court what he referred to as "moderate elements," in Hizbullah.

To the extent that Brennan's statement echoes the Obama administration's analysis of Hizbullah, it is simply terrifying.

Hizbullah was established by Iran in 1981. It has a dual mission of serving as the advance guard of Iran's global Islamic revolution and of spreading the Iranian revolution to Lebanon. Hizbullah's participation in Lebanese politics is consonant with this mission. It does not in any way indicate a moderation of the organization. Had Brennan looked, he would not have found a single statement by Hizbullah parliamentarians or government ministers that in any way contradicts Hizbullah's Iranian-dictated missions.

But then, Brennan's asinine position on Hizbullah is part and parcel of his overall denial of the threat radical Islam poses to the US and to the rest of the world. In a speech at New York University last August, Brennan gave a stirring defense of Islam as a religion of peace. He eschewed any connection between the likes of al Qaida and the Iranian mullahs and Islam and claimed that jihad is a great and good thing.

"Using the legitimate term jihad, which means to purify oneself or to wage a holy struggle for a moral goal [to describe the cause for which Islamic terrorists fight], risks giving these murderers the religious legitimacy they desperately seek but in no way deserve."

What Brennan's statements show is that Obama, who picked Brennan to serve as his chief counterterrorism advisor, is ideologically committed to the notion that Iran and its fellow jihadists are not an inherent threat to the US and its allies. That is, Obama is ideologically committed to the notion that there is no reason to take any action against Iran that could actually prevent the likes of Mahmoud Ahmadinejad and Hassan Nasrallah from developing and deploying nuclear weapons.

Since Obama took office nearly a year and a half ago, Israel has agreed to Obama's demand that it allow him to take the lead on international efforts to prevent Iran from becoming a nuclear power. Israel stood back as he wasted a year trying to woo Ahmadinejad often at Israel's own expense as he linked Iran's nuclear weapons program to the Palestinian conflict with Israel. Israel has stood back since then as he pushed forward UN sanctions.

And now, a year and a half later, Obama's sanctions gambit is revealed as a dangerous joke. Iran is months away from the bomb. Hizbullah has an arsenal of guided missiles capable of hitting Tel Aviv and beyond. Iran's diplomatic stature has soared to unprecedented heights as it runs diplomatic circles around Obama and his advisors. And Brennan wants to make a deal with Hizbullah.

South Korea's acknowledgment of North Korea's aggression places it on a collision course with the Obama administration which prefers to court Beijing for dollars than deal effectively with Pyongyang's aggression. Israel has been on a collision course with Washington for a year and a half now as it insists in the face of US opposition that Iran's nuclear program is the greatest threat to global security today.