Heads of state around the world and their financial advisers are calling for a global economic structure that they say would prevent such a worldwide crisis from happening again. 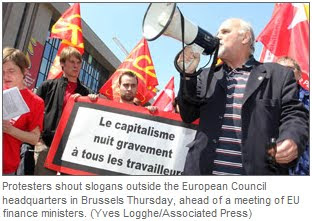 The call for a global economic structure to prevent a worldwide financial crisis like that of Europe and in fact the entire world is a scenario from the pages of Bible prophecy.

The economic crisis in Europe has the attention of the financial leaders around the world fearing the possibility that a similar scenario could unfold in their own countries and even spread across the globe. Many economic experts are saying that the Euro, the common currency of Europe, that the Euro as we know it is dead. The jury is still out on the survival of the Euro but the world indeed is very fearful that this economic global crisis is only going to get worse before it gets better. This is, as I said, a page out of Bible prophecy.

In the book of Revelation the world dictator, better known as the Antichrist, will set a world economic headquarters to control all selling and buying across the globe. That location is Babylon according to Revelation 18 which is modern-day Iraq. The Antichrist will cause everyone who wants to buy or sell anything even the essentials of life to have an identification mark on the forehead or the back of the hand (Revelation 13:16-17). Though this may seem impossible, today's global economic crisis is setting the stage for just such a scenario to be played out. Bible prophecy will be fulfilled.