Hooray for Glenn Beck! Right out there in front of God and everybody, he talks about global governance as a real and present danger. But right on cue, progressive bloggers do their best to ridicule the idea with wisdom such as this:

Seriously, for a moment. We're going to have to address the paranoia about a global takeover at some point – probably in easy-to-comprehend, Dick-and-Jane language – for the tea party.

Could it be that these people really don't know that global governance is already here? 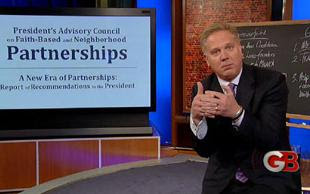 Speaking to the delegates to the U.N. Conference on Climate Change at The Hague in 2000, then- French President Jacques Chirac said:

For the first time, humanity is instituting a genuine instrument of global governance, one that should find a place within the World Environmental Organization which France and the European Union would like to see established.

… the emerging economies are now economically and financially so important and systemically so influential that they must have a full and proper ownership of global governance.

… the framework of rules, institutions, and practices that set limits on behavior of individuals, organizations, and companies. (U.N. Development Report, 1999, p. 34)

Few people realized that when the United States agreed to the Convention on Trade in Endangered Species (CITES), March 3, 1973, that by Dec. 28, 1973, there would be a federal law – the Endangered Species Act – "limiting the behavior of individuals, organizations, and companies" to comply with the "framework of rules" created by the institution called the United Nations.

Few people recognized it to be global governance when the United States endorsed the report of the United Nations Conference on Human Settlements in 1976, which said:

Private land ownership is a principal instrument of accumulating wealth and therefore contributes to social injustice. Public control of land use is therefore indispensable.

By 1996, however, the recommendations in this report were being implemented through the President's Council on Sustainable Development and were imposing comprehensive land-use plans, which mandate "… limits on behavior of individuals, organizations, and companies," as prescribed by the institution called the United Nations.

Few people paid any attention to the 1995 report of the U.N.'s Commission on Global Governance, which outlined a procedure for achieving complete global governance, including the creation of a new U.N. Economic Security Council with the power to control the world's economy.

Few people dared call it global governance when the U.N.'s special High Level Panel on Financing for Development produced a 2001 report for a meeting in Monterrey, Mexico, calling for global taxation, a global council to control the global economy and for strengthening the World Trade Organization to control global trade.

Global governance has grown up around us. Except for the Reagan administration, both Democratic and Republican administrations have supported this push toward global governance. The current global economic crises are fueling the construction of the new global economic system that will swallow the U.S. economic system and make it subservient to the new global system. This new international institution, working in conjunction with a strengthened WTO, IMF and World Bank, will result in de facto global governance.

Global governance is not a law or resolution that requires approval of Congress; it is a process, the parts of which have already been approved by Congress, various administrations and to a very large extent by the American people, even though they do not recognize the result to be global governance.

Glenn Beck is in the process of discovering what global governance really is, and he is not afraid to tell his audience what he is learning, even though he knows his critics will ridicule his observations. It matters not how blatant the ridicule is, or the source from which it comes. "Global governance is here, it is here to stay, and … it will inevitably expand," unless the American people come to grips with the facts.

At West Point, Obama talks of a new 'international order'... - The Washington Post

Shadow Government: How the Secret Global Elite Is Using Surveillance Against You - Grant R. Jeffrey (Book)