"The cardinals have elected me, a simple, humble worker in the Lord's vineyard. I am comforted by the fact that the Lord knows how to work and act even with insufficient instruments. And above all, I entrust myself to your prayers." - Joseph Ratzinger upon his installation as Pope Benedict XVI. 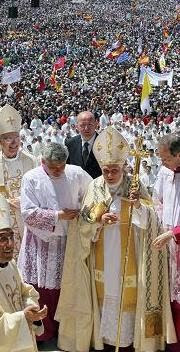 Last week Pope Benedict travelled to the Fatima shrine to worship, drawing 500,000 followers with him to the spot where the Virgin Mary allegedly gave visions and prophecies to three Portuguese children. This week Portugal ignored Pope Benedict XVI's pleas and legalized same-sex marriage, becoming the sixth European nation to do so. The Pope had criticized both gay marriage and abortion as "insidious and dangerous threats to the common good". Whether people adore or ignore the Pope, he holds a powerful position in the world. Who is the man under the Triregnum, this man who influences so many millions of people?

No Nazi: Joseph Ratzinger was born in 1927 in the Bavarian village of Marktl am Inn, Germany, the youngest of three children. His father, Joseph Ratzinger, Sr., was a Anti-Nazi Catholic policeman. The family moved four times during Joseph's early upbringing because of conflict with the Nazi regime, eventually settling in the Catholic town of Traunstein. There, young Joseph would have undoubtedly witnessed the effects of Nazi cruelty toward Jews, the disenfranchised and conscientious objectors. We find no concrete examples of the Ratzinger family's active participation in resistance against the Nazis. Joseph Ratzinger's failure to take a more personal and active role in defying the Nazi authority or assisting victims, which were certainly abounding, is a popular point for debate among Pope Benedict XVI's supporters and critics alike.

In 1941, Ratzinger was required by law, with all 14-year-old German boys, to join the Hitler Youth. He did so with apparent reluctance and avoided the meetings, though proof of attendance would reduce his seminary tuition. In the same year, Nazis took one of Ratzinger's 14-year-old cousins, a boy with Down's Syndrome, from his family home during the Nazi Aktion T4 eugenics movement.

Joseph was conscripted into the Flak - the German anti-aircraft corps - while still in seminary, but illness prevented him from participating in much of the military training and duties. He later deserted the corps in 1945, right before the end of the war, and was held briefly in an Allied POW camp. Joseph and his brother George underwent "repatriation" in 1945 after WWII, and were first admitted to St. Michael Seminary in Traunstein, and then the Ducal Georgianum of the Ludwig-Maximilian University. Upon graduation, both were ordained.

The Controversial Pope: Since his installment as the Vatican's highest official, Pope Benedict XVI's viewpoints have drawn heavy criticism from a number of groups, including world-wide gay, Jewish, and Muslim communities, abortion advocates, and victims of papal sex scandals. He has been called prior to his selection, perhaps unjustly, "the panzer cardinal," and "the pope's hitman," and by The LA Times, a "hard-line doctrinal watchdog." His personal manner, however, is frequently expressed in a mild, gentle, logical way, humble and devoid of either the icy pomp of long-past papal figures or the charisma and geniality of his friend John Paul II. He is known for embracing Jews, calling them, "my brothers and sisters of the Jewish people, to whom we are joined by a great shared spiritual heritage, one rooted in God´s irrevocable promises." On the other hand, he's made a large number of negative statements toward Islam and Buddhism, homosexuality and abortion.

Conservative Christians tend to embrace this "reactionary" Father precisely for his staunch call to Universal Truth and his return to fundamental Catholicism that eschews secular relativism.

"We are moving toward a dictatorship of relativism which does not recognize anything as for certain and which has as its highest goal one's own ego," Benedict warns regarding our current culture, and admonishes, "being an adult means having a faith which does not follow the waves of today's fashions or the latest novelties."

The current Pope has shown by his public statements on Islam and non-traditional gender roles that he is capable of speaking his convictions, no matter how unpopular they may be. But has he shown by his past actions - or possibly his inaction - the same willingness to protect the defenseless?

The media frequently advertises Pope Benedict as scientific, bookish, monkish, theologically conservative, even reactionary and repressive. Less conservative critics of Benedict point out that exposure to the Nazi regime and subsequent resistance, and even to the liberating culture of Germany in the 1960's should have instilled the importance of reasoned questioning of corrupt authority in a young Joseph Ratzinger. Perhaps it has. The Pope has drawn fiery condemnation from The NY Times for his conservative political positions. Yet Benedict's frequent criticism of corporate greed, his opposition to the Iraq War, his push for nuclear disarmament, and "his mild and sentimental socialism has somehow escaped notice" by "liberal commentators," writes The Weekly Standard's Joseph Bottum in a May 2005 article.

The Scandals: The Catholic Church is now deeply embroiled in allegations of sexual crimes committed by bishops in the US, Britain, Germany, Austria, France, the Netherlands, and even Italy herself. The Church faces a massive fallout that includes rapidly declining membership, dissatisfied believers, loss of faith, and an increasingly negative perception among Muslims, Jews, atheists, and Buddhists. The Catholic Church also must compensate for a decrease in charitable donations from members, which has already forced the Church to sell a number of its churches and schools.

Pope Benedict XVI seems, according to his own words, to be a devoted servant of social justice. Yet over the past decade, lawsuits filed against the Holy See contend that the Vatican was aware of the sexual misconduct of priests such as the late Wisconsin Rev. Lawrence Murphy, who may have abused as many as 200 deaf boys from 1950-1974. Victims and families contend that the Church was aware, yet did not remove these predators from their posts, but in some cases, "rehabilitated" and moved the offenders to a new jurisdiction where new victims were allegedly targeted.

While he only recently became Pope, Ratzinger apparently bears some responsibility for the Catholic Church's negligence. Over a period of several decades, thousands of allegations of sexual misconduct were recorded by bishops and sent to then-Cardinal Ratzinger at the Congregation of the Doctrine of the Faith, an office within the Vatican responsible for priest conduct, trials, and defrockings. When the initial allegations against Wisconsin priest Lawrence C. Murphy, who worked at a renowned school for deaf children from 1950 to 1974 came to light, Cardinal Ratzinger failed to bring him to trial because he was old and ill, and too much time had passed according to the Catholic Church's statute of limitations. Considering that Murphy had molested about 200 boys, Ratzinger's lack of action reflects the Catholic Church leadership's serious neglect of the damage done to these child victims.

The Pope has admitted the failure. Benedict XVI has been the first Catholic official in the wake of the recent sexual abuse allegations to publicly acknowledge the Church's own guilt, rather than dismissing media coverage of the scandal as a smear campaign, as other Catholic officials and spokespeople have repeatedly done. Though he did not specifically mention sexual misconduct, Pope Benedict XVI recently spoke to reporters during his trip to Portugal, declaring sexual abuse against children "truly terrifying," and insisting, "The church thus has a profound need to relearn penitence, accept purification, learn forgiveness, but also the necessity of justice."

An estimated 150,000 loyal supporters gathered in the rain and gloom of St. Peter's Square this May in a show of solidarity for their pontiff, who indirectly spoke regarding the allegations. Benedict spoke out, not against the media, but against human weakness of sin, "the spiritual evil that unfortunately sometimes infects even members of the church."

All eyes are on the Pope now, waiting to see whether victims of the decades-long abuse will receive justice, or how the church officials who committed crimes, either by action or inaction, will be treated by the Roman Catholic Church. The Pope's reaction to the current scandal is vital for its moral credibility.

While Protestants reject a large number of the teachings of the Roman Catholic Church as unbiblical, the rest of the world doesn't know the difference. While many Protestants consider the Vatican a diabolical institution, much of the world looks to the Pope as the leader of Christianity on earth. Whether we like it or not, the scandals in the Roman Catholic Church affect the willingness of people to hear the Gospel. That the Pope has acknowledged the sin and failure rather than placing blame on other people is good, but the Roman Catholic Church, and specifically Pope Benedict XVI, truly need to continue to deal with this problem - with actions and not just words.

Is Catholicism a false religion? Are Catholics saved? - GotQuestions.org

Reasoning from the Scriptures with Catholics - Ron Rhodes (Book)