While the U.S. government has a faith in Mahmoud Abbas and the Palestinian Authority that borders on the mystical, some of us see them merely as the "good terrorists" (good because willing to talk to Israel) as opposed to the "bad terrorists" of Hamas (bad because unwilling to talk).

Along comes Palestinian Media Watch to make our point in spades, publishing today an eye-opening compendium of tributes by the PA to a long list of murderers. Titled "From Terrorists to Role Models: The Palestinian Authority's Institutionalization of Incitement," its summary explains that "The PA's policy of naming schools, summer camps, sporting events, streets and ceremonies after terrorists fundamentally undermines the chance for peace." Written by Itamar Marcus, Nan Jacques Zilberdik, Barbara Crook and the PMW staff, it establishes in painstaking detail PA glorification of some of the most evil individuals in recent years. 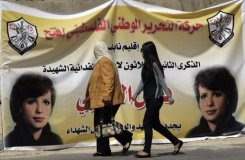 Take the example of Dalal Mughrabi, the 19-year-old woman who led the "Coastal Road massacre" in March 1978 that killed 37 civilians in a bus hijacking that killed more Israelis than any other Palestinian terror attack. Her abominable name has been immortalized through the designation of two elementary schools, a kindergarten, a computer center, summer camps, football tournaments, a community center, a sports team, a public square, a street, an election course, an adult education course, a university club, a dance troupe, a military unit, a dormitory in a youth center, TV series, a TV quiz team and a graduation ceremony.

PMW's report includes 100 examples named after 46 terrorists, 26 of which were reported in the Palestinian media in the first four months of 2010 alone. The report makes vivid the impact of these namings by imagining a Palestinian child who can walk to school along a street named after the terrorist Abu Jihad, who planned a bus hijacking that killed 37, spend the day learning in a school named after Hamas founder Ahmad Yassin, in the afternoon play football in a tournament named after suicide terrorist Abdel Baset Odeh who killed 31, and end his day at a youth center named after terrorist Abu Iyad, responsible for the killing of the 11 Olympic athletes in Munich.

Nor is the PA's glorification of violence limited to Palestinian murderers: "Iraqi insurgent Ali Al-Naamani committed the first suicide bombing attack in Iraq, killing four American soldiers. The Palestinians named a square in the center of Jenin after him. Likewise, Saddam Hussein has a Palestinian school and a road named after him."

When confronted with criticism for exalting terrorists, the PA leadership shows no contrition. "Of course we want to name a square after her," says Abbas about Mughrabi.