Iranian President Mahmoud Ahmadinejad is doing everything he can this week to turn international attention away from Iran’s nuclear weapons program and Iran’s repeated threats to annihilate the U.S. and Israel by trying to get the world to focus on Israel’s alleged nuclear weapons stockpile instead. His objective during his visit to New York City: to persuade the U.N. to force Israel to disclose and dismantle all of her defensive weapons even as Iran completes its own offensive weapons. 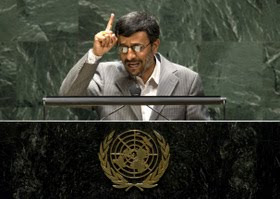 Secretary of State Hillary Clinton said on NBC’s “Meet The Press” on Sunday that the U.S. would not be side-tracked by the tactics of the Iranian delegation. “I think they’re coming to try to divert attention and confuse the issue,” she said. “[But] there is no confusion. They have violated the terms of the NPT, they have been held under all kinds of restrictions and obligations that they have not complied with by the IAEA, the International Atomic Energy Agency, by the U.N. Security Council. So we’re not going to permit Iran to try to change the story from their failure to comply and in any way upset the efforts we are in the midst of, which is to get the international community to adopt a strong Security Council resolution that further isolates them and imposes consequences for their behavior.”

Tough talk from Clinton, but the fact remains the U.S. still has not persuaded the U.N. to pass tough new sanctions against Iran and it’s not clear even a weakened new round of sanctions will be passed by the Security Council before summer.

Meanwhile, Ahmadinejad is turning his rhetorical firepower against the U.S. “Ahmadinejad on Monday called for states that threaten to use atomic weapons to be punished, a clear reference to a new U.S. nuclear strategy released last month,” reports Reuters. Ahmadinejad also rejected allegations that Iran is developing nuclear weapons, reported AP, saying the U.S. has produced ”not a single credible proof.”

Iran: US should be punished for nuclear 'threats' - Reuters