We have seen this coming for some time now. The public space has been closing, especially when it comes to Christian speech — and especially when that speech is about homosexuality.

Now, a Christian preacher has been arrested in Britain for the crime of saying in public that homosexuality is a sin. This arrest is more than a news event — it is a signal of things to come and an announcement of a new public reality. Even if all charges are dropped against this preacher, the signal is sent and the message is clear. The act of Christian preaching is now a potential criminal offense. 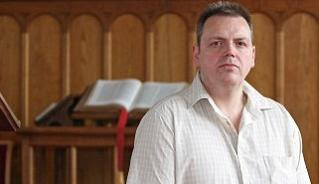 Street preaching has a long and well-recognized history in Great Britain. Indeed, preachers of every sort are hardly alone in continuing Britain’s tradition of public rhetoric, seen quintessentially at “Speakers’ Corner” in London’s famed Hyde Park. Dale McAlpine of Wokington in Cumbria has been preaching on the streets for years. The 42-year-old preacher, a Baptist, was arrested after telling a passerby that homosexuality is a sin.

According to The Telegraph [London], McAlpine had been preaching from atop a stepladder. He also passed out tracts explaining the Ten Commandments. Later, he was involved in a discussion with a woman who wanted to “engage him in a debate about his faith.”

During the exchange, he says he quietly listed homosexuality among a number of sins referred to in 1 Corinthians, including blasphemy, fornication, adultery and drunkenness. After the woman walked away, she was approached by a PCSO [Police Community Support Officer] who spoke with her briefly and then walked over to Mr. McAlpine and told him a complaint had been made, and that he could be arrested for using racist or homophobic language. The street preacher said he told the PCSO: “I am not homophobic but sometimes I do say that the Bible says homosexuality is a crime against the Creator”.

The police officer, identified in the news report as a homosexual and as the “Lesbian, Gay, Bisexual, and Transgender liason officer” for the local police department, then identified himself to Dale McAlpine. The preacher responded, “It’s still a sin.”

He then preached a sermon on a range of issues that did not include homosexuality. The paper reports, “Three regular uniformed police officers arrived during the address, arrested Mr. McAlpine and put him in the back of a police van.”

He was arrested under Britain’s “Public Order Act,” which, the paper reports, “has been used to arrest religious people in a number of similar cases.” The law allows the arrest and prosecution of anyone who, with intent to harass or cause harm, uses “threatening, abusive or insulting words or behaviour.”

In this case, the simple act of stating in public that homosexuality is a sin was enough to get this preacher arrested. He is not the first. The Telegraph also reported that Harry Hammond, a lay preacher, was convicted in 2002 for holding a sign that read “Stop Homosexuality. Stop Lesbianism. Jesus is Lord” as he preached in Bournemouth, near Southampton.

The arrest of Dale McAlpine is attracting some degree of international media attention, but the case represents far more than a media spectacle. This arrest is a clear sign that the logic of “hate speech” laws and similar rules and campus codes runs into direct collision with religious liberty and the freedom of religious speech.

The Telegraph’s report includes the ironic and chilling explanation that Dale McAlpine was arrested for saying that homosexuality is a sin and for doing so “in a voice loud enough to be heard by others.” Is not the purpose of any speaker to be heard by others? Are we to assume that the British police would suggest that Dale McAlpine hold fast to his beliefs, but mutter them only under his breath?

He is being defended in court by the Christian Institute, a group that monitors such cases and offers legal counsel. Sam Webster, a solicitor-advocate with the Institute, said, “Yes, the police have a duty to maintain public order but they also have a duty to defend the lawful free speech of citizens. It’s not for police to decide whether Mr. Mcalpine’s views are right or wrong.” He continued: “Case law has ruled that the orthodox Christian belief that homosexual conduct is sinful is a belief worthy of respect in a democratic society.”

That may not be true for long, and it may not help Dale McAlpine now. Both the Labour Party and the Liberal Democratic Party have pushed for repeal of language offering some protection for religious speech. The Conservative Party has generally opposed such measures. Will British Christians have this in mind when they vote Thursday in the nation’s general election?

We are witnessing the constriction of Christian speech and the criminalizing of Christian ministry. The Bible clearly condemns homosexual behaviors, and the Christian church has been clear about this teaching for twenty centuries. But now, the statement that homosexuality is a sin can land a preacher in jail.

We will soon learn which nations truly believe in religious liberty and freedom of speech. Cases like this are inevitable when the logic of hate speech and special rights for “sexual minorities” prevails.

Do not for a moment think that this troubling development is of consequence only for street preachers in Britain. The signal sent by this kind of arrest reaches right into every church in every nation where a similar logic takes hold.

Yes, we will soon learn which nations honor religious liberty — but we will also soon learn which preachers are determined to honor God’s truth, whatever the cost. Paul’s command to preachers to preach the Word, “in season and out of season” is about more than when preaching is more and less popular. It may well mean preaching the Word, in jail or out of jail.

Commentators speak out over street preacher arrest - The Christian Institute

Portraits of Freedom: 14 People Who Came Out of Homosexuality - Bob Davies (Book)