President Obama on Saturday told 1,064 graduating West Point cadets — some bound for Afghanistan — they face a “tough fight” but “I have no doubt … we will succeed in Afghanistan.” The commander-in-chief shouldn’t be so confident.

“There will be difficult days ahead [in Afghanistan],” Obama warned the graduating class at the United States Military Academy. He knows our forces are poised to attack Kandahar, the country’s second largest city and the Taliban’s birthplace, and that battle will decide his strategy’s success.

Obama’s strategy pits our forces against a resilient enemy while intentionally handicapping our chances of success as demonstrated by the proof-of-concept operation in Marjah, a community South of Kandahar.

Three recent back-to-back Taliban attacks on American symbols of power in Afghanistan demonstrate the enemy’s daring. Hours after Obama’s Saturday speech at West Point, Taliban forces attacked the massive allied airfield outside of Kandahar. That attack comes close on the heels of an attack on American military convoys in the capitol, Kabul, and a frontal assault on the sprawling American military headquarters at Bagram airfield North of Kabul.

Evidently the resilient Taliban are also ready to do in Kandahar what they’ve done in Marjah. The Marjah operation started in February and was suppose to be the coalition’s proof-of-concept for the upcoming battle for Kandahar. But three months after the initial assault that operation has bogged down. 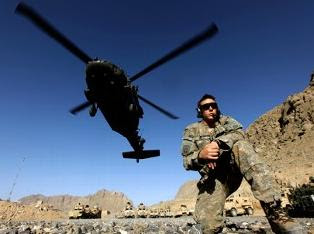 Obama’s concept calls for the military to clear out the Taliban and then establish security with Afghan security forces. Next, the Afghan government moves in to establish rule of law, deliver basic services and kick-start the economy. Finally, if all goes as planned the population will abandon the Taliban for the government.

But Obama’s concept has yet to be validated. Even though the coalition declared victory two weeks into the Marjah operation, daily clashes with the Taliban continue. Afghans still flee the city because of the lack of security and Washington’s promised civilian projects have faltered. And the opportunity to win the population’s trust is fading as evidenced by a recent field survey by the International Council on Security and Development which found 61% of those interviewed in Marjah felt more negative about coalition forces after the operation than before the offensive.

Even though Marjah hasn’t validated Obama’s Vietnamization-like strategy, our forces are poised to launch operations to take Kandahar. Obama’s promise of success cannot be kept unless the following five hurdles are overcome.

First, the development arm of Obama’s strategy is failing in Marjah. Why then should anyone expect a better result in Kandahar?

The U.S. created a $360 million program aiming to suppress the insurgency by providing agricultural jobs and cash for farmers to buy seed and fertilizer. But in Marjah villagers spurned American aid for fear of Taliban reprisal.

So far, Washington has spent only $1.5 million of the $19 million planned for civilian projects in Marjah and only 20 Marjah residents have been hired. Even the U.S. Agency for International Development stopped plans to provide irrigation pumps to Marjah’s farmers because the Taliban killed farmers who accepted the equipment.

Second, the campaign lacks sufficient time to succeed. Obama promised to begin withdrawing American forces by July 2011 but it’s doubtful Marjah will be pacified by next summer much less the much larger Kandahar. Adm. Mike Mullen, chairman of the U.S. Joint Chiefs of Staff, cast the Kandahar battle as a make-or-break campaign that will determine whether the U.S.-led war can succeed.

Unfortunately for Obama, his hurried timeline isn’t supported by the history of successful counterinsurgencies. A 2008 RAND Corporation study, “Counterinsurgency in Afghanistan,” assessed 90 insurgencies since 1945 and found it takes an average of 14 years to defeat insurgents, not 13 months.

Third, the Afghan security forces are not ready. Last November Afghan President Hamid Karzai said his country wouldn’t be ready to assume the security lead for three to five years and Kabul won’t be ready to support those forces for another 15 years. That’s important because indigenous forces are critical to successful counterinsurgencies. The RAND report indicates indigenous forces have to win the war on their own but first they must develop the capacity to do so.

“Leading with indigenous forces is important because they know the population and terrain better and are better able to gather intelligence,” the RAND report states.

Obama’s strategy recognizes the need to lead with Afghans. Unfortunately, a U.S.-Afghan offensive near Kandahar was just canceled because the Afghan leaders were not considered ready, according to Stratfor, a U.S.-based intelligence think tank. Stratfor concludes, “This is a reminder of the complexity of building a military force from scratch.”

The U.S. commander in Kandahar admits problems with local police as well. Maj. Gen. John Campbell, the commander of the 101st Airborne Division, told the Army Times that the Kandahar police need plenty of attention because in the past they had problems with equipment and training, but now the issue is retaining good leaders.

The Afghan National Police (ANP), which must play a critical role in Kandahar, is also problem plagued. Gen. Sir David Richards, the head of the British army and the former commander of NATO forces in Afghanistan, said it will take until 2015 before the ANP are fully functional. Recently, a British press report cited a government assessment of the ANP which indicates those forces are plagued with widespread incompetence, criminality and absenteeism up to 25% and the New York Times reports drug abuse up to 41% among police recruits.

Fourth, there are insufficient counterinsurgents. There are currently 7,800 NATO troops in the Kandahar area along side 12,000 Afghan soldiers and police. NATO forces are expected to swell to 11,200.

Gen. Stanley McChrystal, commander of U.S. and NATO troops in Afghanistan, calls the pending fight for Kandahar a “process” — not an “operation” — to indicate a different approach is planned. That may explain why he ignores U.S. doctrine in sizing the force or perhaps he’s executing Obama’s strategy knowing that more troops aren’t possible. Doctrine prescribes 20 counterinsurgents per 1,000 inhabitants or 50,000 troops for Kandahar’s one-million population.

There aren’t sufficient forces to doctrinally man the Kandahar effort and conduct operations elsewhere in that Texas-sized country. After the U.S. surges 30,000 fresh troops it will have 98,000 by August and there are 46,500 other international forces in Afghanistan, but many of those won’t join the counterinsurgency. As of April, the Afghan army had 113,000 and the Afghan police fielded 102,000 but these forces are at various levels of training.

Finally, Pakistan needs to do more. Obama said, “Our success in Afghanistan is inextricably linked to our partnership with Pakistan.” That’s especially true as we prepare for Kandahar, which is 50 miles from Pakistan’s border.

Last year, Pakistan conducted operations along the border which achieved geographic objectives but failed to destroy the Taliban. A new border offensive this winter and an aggressive effort with special forces and drones has degraded Taliban operations further.

Earlier this month, U.S. Central Command chief Gen. David Petraeus visited Pakistan to discuss the Kandahar offensive. He sought that country’s support in the form of accurate, actionable intelligence. He also won an agreement “in principle” that Pakistan will launch a major operation into the critical North Waziristan, the heart of Taliban activity. But the timing of that anticipated operation will not necessarily parallel our Kandahar operation.

It seems highly unlikely that Obama will keep his promise to the West Point graduates for success in Afghanistan, as the hurdles to overcome are complex and require more time and treasure than America or Obama are likely to tolerate. Kandahar is shaping up as the “center of gravity” for Obama’s Afghan strategy, but there is little evidence of Afghan and Pakistani support for an American success. At this point failure is more likely than success.

NATO: Marjah some 3 months away from success - AP

For the first time since Iraq invasion, more US forces now in Afghanistan than in Iraq - Washington Examiner

US, NATO Gear Up for Major Offensive in Kandahar - VOA