President Obama's Commencement speech to the West Point graduates this weekend has gotten flak for its emphasis on developing a new "international order" and putting too much faith in global institutions. His speech comes on the heels of Joe Biden's comments to the European Parliament that Brussels should have the title "capital of the free world" - in opposition to Washington DC. Despite all the controversy and bloodshed perpetuated across Planet Earth, politicians still cling with idealistic tenacity to the idea of global peace and unity. Peace and unity are great goals, of course, but the perpetual problem is that godless governments have always resorted to tyranny in their attempts to produce their philosophical utopias when troublesome human beings have refused to conform. 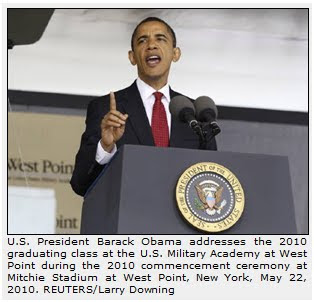 US President Barack Obama addressed the 2010 graduating class of the US Military Academy at West Point, the oldest of the United States' five military service academies, this weekend. Obama had some fun with the cadets, telling them, "And so, as your Commander-in-Chief, I hereby absolve all cadets who are on restriction for minor conduct offenses," for which he received applause. He elicited laughter when he followed that by saying, "I will leave the definition of 'minor' to those who know better."

Obama began his speech well enough, encouraging the West Point cadets, crediting the "competence and creativity and courage" of American soldiers with the successes in Iraq, and recognizing the work ahead in Afghanistan. He honored the "78 graduates of this Academy who have given their lives for our freedom and our security in Iraq and Afghanistan." The President declared his expectation of success in Afghanistan and his confidence in the innovation of American businesses. Throughout his speech the President promoted America as a great and heroic country.

Obama's speech did have some good stuff in it. Many parts of the speech rang true to Americans who love their country. Yet, some are skeptical of the President's real intentions and doubt his sincerity.

Political strategist Mike Baker noted, "Politically, Obama loves to talk about the Constitution, but will bypass its provisions if he believes it hinders his agenda. He uses flowery language and colorful flourishes that hide his predisposition to socialism and neo-Marxism."

And Judith Miller reminds the readers of Fox News that Obama did nothing to promote human rights when Persian protestors were being beaten and killed last summer after the Iranian elections.

A president's words are extremely important, but the actions that follow the words have far more significance. Miller concluded, "It remains unclear whether future American actions and policies will be more consistent with his West Point objectives."

Obama also went on in his speech to promote a new "international order" with the idea of improving upon times of historical international cooperation and making the world a better place. He said:

So we have to shape an international order that can meet the challenges of our generation. We will be steadfast in strengthening those old alliances that have served us so well, including those who will serve by your side in Afghanistan and around the globe. As influence extends to more countries and capitals, we also have to build new partnerships, and shape stronger international standards and institutions.

This engagement is not an end in itself. The international order we seek is one that can resolve the challenges of our times - countering violent extremism and insurgency; stopping the spread of nuclear weapons and securing nuclear materials; combating a changing climate and sustaining global growth; helping countries feed themselves and care for their sick; preventing conflict and healing wounds. If we are successful in these tasks, that will lessen conflicts around the world.

Never mind that the United Nations has failed to stop the nuclear ambitions of Iran or rescue the starving, tormented citizens of North Korea. Never mind the impotency of global governments to sponsor peace in a little country called Israel. Global cooperation sounds like a fantastic idea. The difficulty always comes down to the fact that human beings are not good at cooperation. Ultimately, the human race has a sin problem, and world governments have not embraced the One who can fix it. Not yet.

New "Capital of the Free World"

Vice President Joe Biden raised eyebrows on May 6th when, in his flattery of the European Parliament, he handed Brussels the title of "capital of the free world."

"As you probably know, some American politicians and American journalists refer to Washington, DC as the 'capital of the free world,'" Biden said. "But it seems to me that in this great city, which boasts 1,000 years of history and which serves as the capital of Belgium, the home of the European Union, and the headquarters for NATO, this city has its own legitimate claim to that title."

The Vice President may have felt he was being humble and generous in making that statement, but if America bows to the European Parliament as the world's leader of freedom, then US sovereignty is endangered. The great danger of global governance is not just that it is bureaucratic or impossible. The great danger of global governance is when there are no free countries left to escape to. America can cooperate with its neighbors and get along with them, but America's standing strong as a truly free land ensures that persecuted peoples always have a place to run to.

One day the Messiah will return and rule the earth, and in that day all our heartfelt desires for peace will come to pass. In that day, Isaiah 11 tells us, the lion will lay down with the lamb:

"...The sucking child shall play on the hole of the asp, and the weaned child shall put his hand on the cockatrice' den. They shall not hurt nor destroy in all my holy mountain: for the earth shall be full of the knowledge of the LORD, as the waters cover the sea." - Isaiah 11:8, 9

Expecting world peace without the Prince of Peace, though, is fruitless, and potentially dangerous.