Israel and the Palestinian Authority recently seized a large quantity of weapons, including rockets, in the strategic West Bank meant for the Hamas terrorist organization, an informed Israeli security official told WND.

The Obama administration has backed a Fatah-led state in the West Bank, which borders Jerusalem and is within rocket range of Israel's international airport. The U.S. is in the midst of brokering proximity talks between the PA and Israel aimed at the creation of a Palestinian state. 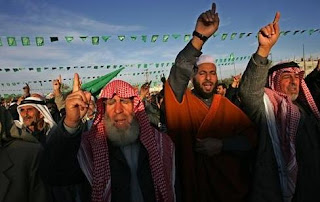 The Israeli security official said there were signs Hamas was gaining strength in the West Bank, in particular by infiltrating Fatah forces and smuggling weapons and cash into key West Bank cities. The official said Hamas has been using young girls to smuggle cash, and that Fatah militants have been instrumental in smuggling weapons on behalf of Hamas.

The Israeli official said that last week, three Palestinian girls from the Al Hayin refugee camp in the West Bank were caught with cash intended for Hamas. The official also said the PA recently clamped down on a Hamas money ring led by a Fatah-linked pharmacist in the West Bank city of Nablus.

Palestinian security sources previously told WND the PA in recent months discovered millions of dollars in cash with Hamas militants in key Fatah-controlled cities, such as Ramallah and Jenin. Upon interrogation, the Hamas members admitted the funds were to be used to aid in the establishment of a military wing in the West Bank, the security officials said.

PA security officials previously told WND a recent Fatah investigation discovered Hamas attempted with some success to establish a military wing in the northern West Bank city of Jenin, another longtime Fatah stronghold. The Iranian-backed Islamic Jihad terror group, however, also has a presence there.

Hamas gunmen in Jenin were thought to be numbered in the dozens. But the PA found out Hamas purchased more than 600 high-powered assault rifles and distributed them to fighters in the city, the security officials said. The officials said Fatah raids confiscated about 100 rifles, but they believe 500 more were handed out by Hamas in Jenin.

Fatah's investigation also found that some members of its declared military wing, the Al-Aqsa Martyrs Brigades terror group, were recruited by Hamas in Jenin with higher paychecks, security officials said. The issue is significant since Hamas' infiltration of Fatah forces in the Gaza Strip was thought to have been the Achilles' heel that led to the terror group's takeover in 2007 of the entire Gaza Strip.

A PA security official claimed to WND in December that his organization does not know of any significant infiltration by Hamas of Fatah's West Bank security forces, many of whom have received new training by the U.S.

The U.S. stepped up its efforts to train the PA the past two years, running more advanced courses guided by Keith Dayton, the U.S. security coordinator to the Palestinian territories. In 2007, Dayton initiated an advanced program for Palestinian police that trains 500 to 600 cadets at a time at the American bases.

The U.S. currently operates training bases for the PA police and other militias, such as Force 17 and the Preventative Security Services in the West Bank city of Jericho and the Jordanian village of Giftlik.

Nevertheless, Israeli security officials say they are concerned Abbas' Fatah organization in the West Bank is infiltrated by Hamas just as it was in Gaza in 2007.

Hamas' infiltration of Fatah in Gaza was so extensive, according to top Palestinian intelligence sources, it included the chiefs of several prominent Fatah security forces, including Yussef Issa, director of the Preventative Security Services, the main Fatah police force. Issa regularly coordinated security with the U.S. and Israel.

Israeli security officials said despite recent U.S. training, they were also concerned Abbas is not strong enough in the West Bank to impose law and order without the help of the Israeli army. According to the officials, Fatah's intelligence apparatus routinely hands the Israel Defense Forces lists of Hamas militants that threaten Fatah rule, requesting that Israel make arrests.

Hamas leaders previously warned they would take over the West Bank if Israel pulls out of the territory.

A Prophetic Perspective of the Hamas-Israeli War - BPT (Bill Salus)