China’s aggressive actions on the high seas, its rapidly expanding navy and its new global strategy suggest Beijing’s motivations are as much about geopolitical power as economics. That’s why the U.S. either accommodates its soon-to-be naval “peer competitor” or face the risk of military conflicts with the emerging superpower. 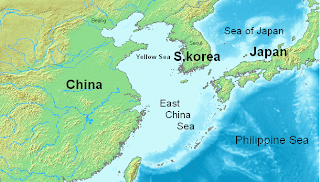 That was the third Chinese provocation over the past month. On April 10 and 21, a flotilla from China’s East Sea Fleet sailed through Japan’s Miyako Strait, a mineral-rich area disputed between the two Asian powers. During each passage Chinese helicopters circled near Japanese destroyers. These incidents irked the Japanese and they happened just days after warships from China’s North Sea Fleet returned from what the Chinese called “confrontation exercises” in the South China Sea, according to Stratfor, an American intelligence group.

The U.S. Navy has been a victim of Chinese “confrontation.” In 2001, Chinese fighters intercepted and crashed into a U.S. Navy P-3 Orion aircraft and then forced it to land at a Chinese military airfield. In late 2007, a Chinese Song class submarine surfaced dangerously close to the U.S.S. Kitty Hawk, an aircraft carrier, during a Pacific exercise. Last year, Chinese vessels aggressively maneuvered within 25 feet of the USNS Impreccable, an unarmed ocean surveillance ship, in the South China Sea.

These aggressive actions suggest China’s navy is taking on a new and dangerous character.

China’s aggressive naval behavior accompanies the regime’s growing and seemingly insatiable appetite for natural resources and the movement of its products to sustain a fast-growing economy. That means Beijing must depend on sea routes for transporting goods, which has become a factor shaping its strategic naval behavior.

Beijing’s motive for a large navy is more complex than trade. There is a rising tide of Chinese nationalism aimed at Japan and the U.S., China’s long-time naval rivals. A larger navy feeds Chinese national pride at its rivals’ expense and gives Beijing the tools to eventually reunify the “renegade province” of Taiwan by force if necessary. And it helps to control contested island groups off China’s coasts, which form a new outer-defense security belt.

“China’s military has begun to develop new roles, missions, and capabilities in support of its growing regional and global interests.”

“We are going from coastal defense to far-sea defense,” Rear Adm. Zhang Huachen, deputy commander of the East Sea Fleet told Xinhua, the state news agency. Adm. Huachen explained, “With the expansion of the country’s economic interests, the navy wants to better protect the country’s transportation routes and the safety of our major sea lanes.”

An April editorial in the Global Times, a Chinese state owned newspaper, tried to dispel concern about its growing navy. “China does not hold an intention to challenge the U.S. in the central Pacific or engage in a military clash with Japan in close waters,” the Times wrote. But that statement radically expands China’s previously defined “core interests” to now include the South China Sea and the entire Western Pacific.

The editorial then warns it’s time for the U.S. and Japan to "adjust their viewpoint when considering China’s moves. The time when dominant powers enjoyed unshared ‘spheres of influence’ around the world is over.” Then it concluded: “A growing Chinese navy is a symbol of China’s peaceful rise.” But that view is contradicted by China’s assertive behavior and its lust for a large, offensively-capable navy.

Two decades of double-digit spending increases have radically grown China’s navy. The 225,000-man People’s Liberation Army-Navy (PLA-N) is organized into three fleets and equipped with 260 vessels including 75 “principal combatants” and over 60 submarines. The U.S. Navy has 286 battle-force ships though the American fleet is qualitatively superior to the Chinese navy.

In March, Adm. Robert Willard, the leader of the U.S. Pacific Command, testified Chinese naval developments were “pretty dramatic.” “Of particular concern is that elements of China’s military modernization appear designed to challenge our freedom of action in the region,” the admiral said.

Beijing’s “pretty dramatic” developments include plans to deploy two aircraft carriers by 2015. It already acquired four retired aircraft carriers: one from Australia and three ex-Soviet carriers. On March 21, the ex-Soviet carrier Varyag left the dry dock in Dalian, China, after refurbishment and now is undergoing the installation of electronics and weapons. A 2009 Pentagon report indicates China is training 50 navy pilots to operate Sukhoi SU-33s (navalized Flankers) for aircraft carrier operations.

China’s navy uses a growing international network of ports known as the “pearl necklace.” Those permanent Chinese bases are along the shores of the Indian Ocean and the maritime routes to the strategic Strait of Malacca: Maldives, Burma, Bangladesh, Sri Lanka, the Seychelles and Pakistan. Beijing is actively negotiating with a number of African countries for permanent ports as well.

Chinese naval units are also going on missions to new locations. Since 2008, the PLA-N has maintained three ships in the Gulf of Aden to conduct counter-piracy patrols and this March two Chinese warships docked in Abu Dhabi, the first time the modern Chinese navy made a port visit in the Middle East. China is also negotiating for a new base in Iran.

Should the U.S. remain engaged in Asia to protect its economic and security interests? It appears the Obama Administration plans to maintain a credible force in the region for now. Recently, it transferred several nuclear submarines from the Atlantic to the Pacific to help keep tabs on China’s submarine force.

But keeping our navy right-sized to meet the Chinese and other global challenges may not be President Obama’s priority. Last week U.S. Secretary of Defense Robert Gates warned, “The gusher [military spending] has been turned off, and will stay off for a good period of time.”

Gates asked, “Does the number of warships we have and are building really put America at risk when the U.S. battle fleet is larger than the next 13 navies combined, 11 of which belong to allies and partners?” That statement doesn’t make sense based on the Pentagon’s 2009 report on China’s military power which indicates Beijing has 260 ships (and growing) compared to America’s 286.

We can also train and equip regional allies like Japan. But most Asian allies can ill afford to deploy ocean-going ships to defend their vital interests from China’s superpower fleet.

Finally, the U.S. ought to engage with China to remove its veil of secrecy about military programs and geopolitical intentions. Security cooperation programs – joint exercises, exchanges – can reduce some tension and maneuver-space agreements can help avoid needless confrontations.

China is a rapidly growing naval power that will soon become America’s “peer competitor.” Washington should engage Beijing at every opportunity to promote transparency and cooperation while maintaining a credible deterrent in Asia. Otherwise our economic and security interests will inevitably collide and we could easily land in a new cold war or worse.

US faces bolder China in annual talks on issues including Iran, currency - CanadianBusiness.com

US Debt, Europe Crisis Among Issues at China Talks - VOA