The North Atlantic Treaty Organization released a draft of its new mission statement on Monday. The years of the Cold War are over, but nothing likes to die, international organizations included. And like anything living, NATO wants to be fed and continues to grow and stretch itself. 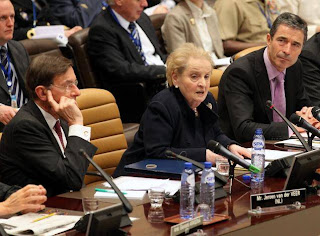 According to this draft, NATO has rewired itself and during the next decade the organization will push for peace in Afghanistan, seek closer ties with Russia, stand in the way of Iranian aggression, and focus on providing for the common defense of its member states. Not only is NATO not dead, it's continued to give itself free reign over the world. The potential excuses for NATO military actions appear limitless, along with the geographic arena in which it might contemplate action. At the same time, there is division in Europe about how to handle the problems faced by those nations.

Afghanistan: The war in Afghanistan is the largest mission ever attempted by NATO, and the new mission blueprint makes it clear that success in Afghanistan is important for the security of the region. The draft states that, "The Alliance is committed to the creation of an Afghanistan that is stable and that does not serve as a platform for international terrorist activity; it should continue working with its partners to achieve this strategically important objective."

Yet, while the US has pushed for a consistent NATO role, European nations are seeking to cut back their military spending. Europe will not endure the death toll forever either. Nearly 1,800 NATO soldiers have been killed fighting in Afghanistan.

NATO Secretary-General Anders Fogh Rasmussen argued the importance of being willing to leave home for self protection, as in Afghanistan, saying, "[W]e may have to go beyond our borders to defend our borders."

However, even Rasmussen seemed to have resigned Afghanistan to a potential loss, saying, "But Afghanistan is not a make or break situation for NATO," said Rasmussen. "NATO is about much more than Afghanistan ... despite the fact that there is so much focus on Afghanistan right now." (That's not the John Paul Jones winning attitude.)

Russia: The Soviet Union collapsed nearly twenty years ago, and NATO has struggled to carve out a new meaning for its existence in the post Iron Curtain era. According to the draft statement, NATO will work toward greater partnership with its former enemy Russia. NATO countries and Russia have a mutual interest in fighting drugs and terrorism and in bringing peace to Afghanistan.

Of course, it isn't a surprise that Russia has seen the expansion of NATO as a threat. In May of 2009, Russia issued a national security strategy of its own, which included concern about NATO's power. "The instability of the existing global and regional architecture, especially in the Euro-Atlantic region… is an increasing threat to the international security," the document said.

Missile defense is also a big concern for Russia. While the Obama Administration set aside US plans to build a missile defense shield in the Czech Republic and Poland, a system may be set up in Romania and Bulgaria by 2015. NATO's new blueprints call for cooperation with Russia over missile defense, saying, "Missile defense is most effective when it is a joint enterprise and cooperation … between the alliance and its partners – especially Russia – is highly desirable."

Russian Deputy Prime Minister Sergei Ivanov in an news conference on Tuesday said that Russia will be able to make decisions by the end of the year about how much it will cooperate with NATO on any proposed missile defense system.

Self-Defense: Former US Secretary of State Madeleine Albright chaired the committee that drafted NATO's New Strategic Concept, and she maintained that defense is still NATO's top priority, saying, "to safeguard security at home the alliance must continue to treat collective defense as its core purpose."

Albright urged member countries to step it up and start putting more money into defense. Only six of NATO's 28 member nations have met their two percent of GDP defense spending goals. Cash-strapped Greece and Turkey have both managed to invest their share (and therefore, the reasoning goes, anybody else can do it too). Altogether, America's European allies spend about $280 billion annually on defense, compared to the $710 billion budget of the US.

Nukes: The draft statement does not call for the removal of all nukes from Europe, but in fact states that, "as long as nuclear weapons exist," NATO needs to have them. Apparently, NATO doesn't need a great many, though, and should keep them "at the minimum level required by the prevailing security environment." The statement therefore supports continued arms reductions agreements with Russia. Germany, Belgium, and other NATO countries want the United States to remove a good 200 nonstrategic arms from military bases in Belgium, Germany, Italy, the Netherlands and Turkey leftover from the Cold War.

The final draft of the strategic concept will be finished by the NATO Secretary General this summer and NATO leaders are expected to approve it at the summit in Lisbon, Portugal in November.

NATO force would stop Palestinian attacks on Israel - The Australian