Kagan a Lesbian? Why It Matters

I don't see how liberal media-types can write, what with those uncallous, milky-soft little digits all bundled in bulky kid gloves and all. Oh, when the target of their "reporting" is a conservative politico, or even Tea Party Joe, off come the gloves. But when it's one of their own – when circumstances require that a fellow liberal undergo a modicum of journalistic scrutiny – its simpatico most sublime. Out with the inquiry; in with the Huggies and tushie powder. 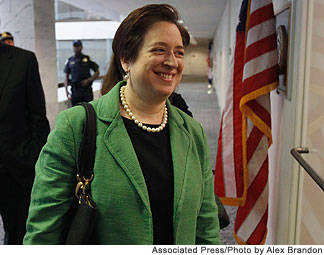 Media, here's your question: "Solicitor Kagan, do you identify as a lesbian?" Ms. Kagan, your answer is simpler still: "Yes" or "no."

Pipe down, lefties. Yes, it is relevant. Most liberals would disagree, but despite "progressive" protestations to the contrary, character does, in fact, matter. A majority of Americans still consider sexual morality – or a lack thereof – a pertinent factor in contemplating one's fitness for any public service – chiefly, perhaps, a lifetime appointment to our most supreme earthly court.

Every major world religion, thousands of years of history and uncompromising human biology have established that homosexual conduct is among other volitional behaviors rightly filed under "sexual immorality." Indeed, the majority of folks around the world – billions, actually – count this a timeless truth.

What is at the heart of evil in our world, and how do we lessen its power in our own lives? Check out David Kupelian's newest book, "How Evil Works: Understanding and Overcoming the Destructive Forces That Are Transforming America"

But the controversial nature of homosexuality is but one point of concern. Another involves potential conflicts of interest, "real or perceived." If we had a judicial nominee – widely believed a compulsive gambler – tapped to preside over gambling cases, would it not matter? If we had a nominee credibly rumored to use medical marijuana who might someday rule on the legality of medical marijuana, wouldn't such information be germane?

And before you liberals throw out that favorite red herring: "By this logic, Clarence Thomas shouldn't rule on cases involving race or sexuality because he's a black heterosexual male" – remember: skin color is a neutral, immutable characteristic. Being black is what someone is.

On the other hand, being "gay" is what someone does. It involves feelings and changeable behaviors. Homosexual conduct is more akin to the aforementioned gambling or pot smoking behaviors than it is to skin color (and for those in the lifestyle, especially men, sodomy most definitely involves rolling the dice). To compare "black" or "heterosexual" to "gay" is to compare apples to oranges. Understandably, many African Americans find this disingenuous comparison tremendously offensive.

Moreover, "heterosexual" is the state of sexual normalcy. It's our God-given design. There remains no credible or replicated scientific evidence to the contrary. Homosexual conduct is but one of many sexually deviant behaviors. Even Darwin's theory of evolution, which imagines "survival of the fittest," would seem to bolster this self-evident truth. You can choose political correctness. I choose moral and biological correctness.

Still, Kagan's "sexual orientation" remains the pink elephant in the room: Can a sitting justice, potentially engaged in the homosexual lifestyle, be trusted to rule on cases that might well grant special preferred government status to some – including that very justice – while, at the same time, eliminating certain free-speech and religious-liberties rights enjoyed by others? (i.e., hate-crimes laws; the Employment Non-Discrimination Act; constitutionality of the Defense of Marriage Act; constitutionality of "don't ask don't tell," etc.)

In April, CBS News published an online column identifying Kagan – should she be confirmed – as the "first openly gay justice." The White House pounced, demanded CBS remove the article and called the assertion "false charges." CBS dutifully complied, tail twixt legs, whimpered away and curled-up behind the rest of Obama's slobbering media lapdogs.

Whereas every liberal hack on the planet tripped over one another to demand Mark Foley, Larry Craig, Ted Haggard and, most recently, George Rekers divulge the most intimate details of their own bizarre (allegedly) sexual appetites, with Kagan, they've suddenly lost interest.

Although the mainstream media refuse to do their job, some in the homosexual-activist press are stepping-up to fill the vacuum.

Homosexual blogger Andrew Sullivan, for instance, writing in The Atlantic, opined: "In a free society in the 21st century, it is not illegitimate to ask [whether Kagan is gay]. And it's cowardly not to tell."

But Kagan ain't tellin', and the media ain't askin'. Of course, even if they were inclined to ask, they'd have a difficult time doing so. The White House has Kagan wrapped-up tighter than Barney Frank in a bustier.

The question is important for context. The answer, for instance, might explain why Kagan drop-kicked our brave men and women of the armed services in the solar plexus, during a time of war, by banning military recruiters from Harvard while dean of the law school. She did so in protest of the military's "don't ask don't tell" policy, calling it "a profound wrong" and "a moral injustice of the first order."

As it turned out, Kagan's actions were illegal, and the very Supreme Court upon which she hopes to serve slapped her down with its 8-0 decision upholding the Solomon Amendment, which would have allowed the Department of Defense to withhold federal funding to Harvard if it failed to reverse its discriminatory policy.

Ed Whelan, head of the Ethics and Public Policy Center in Washington, D.C., said of Kagan's activism: "At a time of war, in the face of the grand civilizational challenge that radical Islam poses, Kagan treated military recruiters worse than she treated the high-powered law firms that were donating their expensive legal services to anti-American terrorists."

Newt Gingrich took his criticism a step further. While addressing the controversy, he bluntly said of Kagan's nomination: "That is an act so unbecoming of an American that she should be disqualified from the very beginning."

Indeed, whether or not Elena Kagan self-identifies as a lesbian, she has proven herself a radical anti-military, pro-homosexual ideologue and activist. There's little doubt that she would take this activism with her to the high court.

So, Ms. Solicitor General, if in fact you are "totally not gay," as some of your friends and your president claim, then it's my hope that a few Republican U.S. senators might take the time to introduce you to a nice fellow by the name of Phil A. Buster. Believe me, it's a match made in heaven.