Thousands of Christian Pilgrims Gather in Jerusalem to Celebrate Easter

Under high security for the Jewish feast of Passover in Jerusalem, the Israeli government has a large security force in place for the Easter weekend as well as thousands of Christian pilgrims flood the city for this very special holy day that marks the death, burial, and resurrection of Jesus Christ. With both holidays happening at the same time this year as it did some 2000 years ago, the city of Jerusalem has come virtually to a standstill as both Jewish and Christian worshipers gather into the Old City for special events.

These two holy days, Passover for the Jews and Easter for the Christians, are an intricate part of the faith and experience of both Jews and Christians. 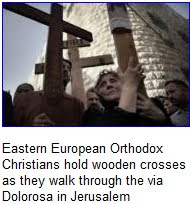 The Jewish holy day of Passover and the Christian celebration of Easter have a unique relationship and a prophetic significance.

This year, the Jewish feast of Passover and the Christian holy day of Easter happen at the same time as they did in 30 AD in the city of Jerusalem. Almost 2000 years ago, the Jews were celebrating the Passover Seder, the same night that Jesus gathered his disciples around him in an upper room in Jerusalem to also go through the traditional Jewish meal to mark the Passover. On that first Easter weekend, resurrection weekend, Jesus Christ raised from the dead after having been crucified on a cross at 3:00PM Passover afternoon.

The person Jesus Christ, the Messiah, fulfilled the first three of the Spring feast days for the Jewish people as was foretold. Jesus Christ will fulfill the last three Fall Jewish feast days as well and by doing so, become the Jewish Messiah and the Christian Savior, becoming the fulfillment of Bible prophecy for both Jews and Christians.

The Implications of the Resurrection - SpiritandTruth.org (Andy Woods)