Echoes from the Souls Who Know Both Bondage and Freedom

Verizon says it will cost over $970 million. AT & T says it will cost a cool billion dollars. Deere & Co costs will be $150 million. It will cost Caterpillar $100 million. This is just a cross section of companies who have estimated the cost of socialized medicine in 2010. Bloomberg reports that the costs will reduce corporate profits by some $14 billion in 2010, reflecting "real value destruction, based on expected cash flows over the life of the company," according to an analyst at Jefferies & Co in New York. Another analyst told Bloomberg, "This is having an impact on the bottom line and that can cut jobs." This at a time when Gallup reports that 20.3% of the American workforce is unemployed or working only part time. 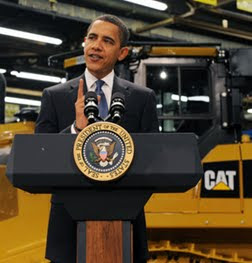 Adding insult to injury, the White House is red hot angry over these companies announcements at a time when it wanted to use the Easter recess for a public relations effort to sell Americans on the benefits of the socialized health care legislation rammed through Congress and signed into law. The Heritage Foundation reports that "the leftist majorities in Congress were incensed that America's employers would dare warn their investors about the costs" at the same time the Administration's national sales pitch was set to begin, that they have mounted an effort to use "the full force of the federal government to bully and harass America's job creators."

According to Heritage, "House Energy and Commerce Committee chairman Henry Waxman (D-Ca) sent letters to the CEOs of Deere, Caterpillar, Verizon, and AT&T demanding all documents "from January 1, 2009, through the present" regarding "any analyses related to the projected impact of healthcare reform" and "any documents, including e-mail messages, sent to or prepared or reviewed by senior company officials related to the projected impact of healthcare reform." Waxman intends to haul these CEOs in front of the Subcommitte on Oversight and Investigations, which just happens to be chaired by Rep. Bart Stupak (D-Michigan), for a hearing on April 21."

Americans are seeing the first signs of the full power of socialism descend upon them like a hammer - this humanist government meting out its judgments as if it were God. It would seem as no coincidence that this is happening during a time when the nation's Christians should be celebrating the perfect liberty given to us by the death and resurrection of our savior Jesus Christ. This may well be a prophetic reminder of Galatians 5:1, "Stand fast therefore in the Liberty wherewith Christ has made us free, and be not entangled again with the yoke of bondage." Its a message that echoes through the halls of time across the ages from the voices of the souls of those who know both bondage and freedom.

Side Effects of Obamacare - The Heritage Foundation