Exploiting the Crisis with Washington

There is an element of irony in the current crisis of relations between the Obama administration and Israel. On the one hand, although US President Barack Obama and his advisors deny there is anything wrong with US-Israel relations today, it is easy to understand why no one believes them.

On the other hand on most issues, there is substantive continuity between Obama's Middle East policies and those his immediate predecessor George W. Bush adopted during his second term in office. Yet, whereas Israelis viewed Bush as Israel's greatest friend in the White House, they view Obama as the most anti-Israel US president ever. This contradiction requires us to consider two issues. First, why are relations with the US now steeped in crisis? And second, taking a page out of Obama's White House chief of staff Rahm Emmanuel's playbook, how can Israel make sure not to let this crisis go to waste? 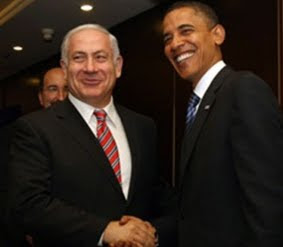 The reason relations are so bad of course is because Obama has opted to attack Israel and its supporters. In the space of the past ten days alone, Israel has been subject to three malicious blows courtesy of Obama and his advisors. First, during his visit to the White House last Tuesday, Obama treated Prime Minister Binyamin Netanyahu like a two-bit potentate. Rather than respectfully disagree with the elected leader of a key US ally, Obama walked out in the middle of their meeting to dine with his family and left the unfed Netanyahu to meditate on his grave offense of not agreeing to give up Israel's capital city as a precondition for indirect, US-orchestrated negotiations with an unelected, unpopular Palestinian leadership that supports terrorism and denies Israel's right to exist. Next, there was the somewhat anodyne — if substantively incorrect — written testimony by US Army General David Petreaus to the Senate about the impact of the Arab world's refusal to accept Israel's right to exist on US-Arab relations. In the event, the administration deliberately distorted Petreaus's testimony to lend the impression that the most respected serving US military commander blames Israel for the deaths of US soldiers in Iraq and Afghanistan. After Petreaus rejected that impression, his boss Defense Secretary Robert Gates repeated the false and insulting allegation against Israel in his own name.

Finally there was the report this week in Politico in which nameless administration sources accused National Security Council member Denis Ross of "dual loyalties." Ross of course has won fame for his career of pressuring successive Israeli governments into giving unreciprocated concessions to Palestinian terrorists. Still, in the view of his indignant opponents in the Obama White House, due to his insufficient hostility to the Israeli government, Ross is a traitor. If Ross wants to be treated like a real American, he needs to join Obama in his open bid to overthrow the elected government of Israel.

These moves would be sufficient to throw US-Israel relations into a tailspin. When combined with the administration's ultimatum demanding a moratorium on Jewish construction in Jerusalem and its threat to coerce Israel into accepting an Obama plan for Palestinian statehood that will imperil Israel's security, it becomes abundantly clear that there is no way to make this crisis go away. There is a crisis in US relations with Israel today because the President of the United States has very publicly taken a torch to those relations and he responds to any sign that the flames are waning by dousing fresh kerosene on the fire.

And yet, when Obama's personal animus is set aside and one examines the substance of his actual policies, ironically, there is little difference between the current administration's policies and those of its immediate predecessor.

In his second term in office, Bush ignored the significance of Hamas's electoral victory in January 2006 and its takeover of Gaza in June 2007. The US expanded its training program for the Palestinian armed forces and pushed Israel to accept a framework for Palestinian statehood that would more or less push it back to the indefensible 1949 armistice lines.

From 2004, the Bush administration sought to appease Iran into giving up its nuclear program — first indirectly through the negotiations that France, Britain and Germany conducted with Teheran. Then in 2006, the administration began direct negotiations with the mullahs.

Bush personally rejected repeated Israeli requests to purchase refueling aircraft and bunker buster bombs necessary for attacking Iran's hardened nuclear facilities. And he refused to back Israeli plans to attack Iran's nuclear installations. So too, Bush stopped calling for regime change in Iran. After the November 2007 publication of the falsified National Intelligence Estimate on Iran's nuclear program, Bush discarded the possibility of a US military strike against Iran's nuclear facilities altogether.

In the 2006 war between Israel the Iranian and Syrian-proxy force Hizbullah, ignoring Hizbullah's membership in the Lebanese government and the Lebanese military's active support for Hizbullah's war effort, Bush forbade Israel from attacking Lebanese government targets. In so doing, he forced Israel to fight a regional foe as if it were a local street gang and so rendered the ultimate result of that war — Israel's first strategic military defeat — a foregone conclusion.

Despite Syria's open sponsorship of the insurgency in Iraq, its strategic alliance with Iran, as well as its sponsorship of Hizbullah, Hamas and al Qaida in Iraq and Lebanon, the Bush administration sought to prevent Israel from destroying Syria's Iranian-financed, North Korean-built nuclear facility. After Israel destroyed the installation in Sept. 2007, the Bush administration demanded that Israel keep silent about the significance of Iranian-North Korean-Syrian nuclear alliance.

Finally, the Bush administration denied the inherent hostility of the Islamist government in Turkey. Instead it cultivated the fantasy that this anti-American, anti-Israel, Hamas, Syria and Iran-supporting regime is a trustworthy ally.

Israel went along with all of these US policies despite their strategic madness because Israel wanted to be a team player. The Sharon and Olmert governments and the Israeli public as a whole believed that Israel had an ally in the Bush administration and that when push came to shove, the massive risks Israel took supporting the US's policies on Iran, Syria, Lebanon, Turkey and the Palestinians would be rewarded.

With Obama of course, things are different. Probably if Obama treated Israel with the same friendliness his predecessor showered on its leaders, Netanyahu would have been willing to walk the plank just as Ehud Olmert and Ariel Sharon did, in the interests of helping his team. But what Obama has made clear in his mistreatment of Israel is that he doesn't want Netanyahu to walk the plank for the team. He wants Israel off the team.

Although unsettling, this dismal state of affairs has a bright side. It provides Israel with a rare opportunity to stop acceding to US policies that are bad for Israel and the US alike. After all, if the US is willing to instigate a crisis in its relations with Israel over plans to zone for housing units in Jerusalem neighborhoods like Ramat Shlomo and French Hill, then clearly Israel can do no right. And if Israel can do no right in the eyes of the administration, then there is no point in bending to its will. Instead, Israel must simply do what it must to secure its interests.

This week Senator John Kerry travelled to Lebanon and Syria to raise the prospects of peace talks between Israel and both countries. Rather than applaud his efforts, Israel should point out that Hizbullah controls the Lebanese government and that US support for the Lebanese military and government strengthens Hizbullah. So too, Israel should make clear that since Syrian dictator Bashar Assad is Mahmoud Ahmadinejad's Arab water boy, it is preposterous to call for Israel to surrender the Golan Heights to his regime. Instead of rehashing the same nonsense, Israel should actively support Syria's Kurds in their bid for autonomy and champion the cause of political prisoners languishing in Syrian jails.

Turkey's announcement this week that it supports Iran's nuclear ambitions should be recognized for what it was: An announcement that the NATO member state has joined the Iranian axis with Syria, Lebanon, Hamas and Hizbullah. Israel should respond to Turkey's announcement by announcing a moratorium on weapons sales to Turkey and so end its counterproductive attempts to paper over the fact that its former strategic ally has become its enemy.

As to the Palestinians, rather than succumb to US demands in the interest of starting doomed-to-fail negotiations with Fatah, Israel should tell the truth. It has nothing to negotiate about and no one to negotiate with. Fatah's leaders Mahmoud Abbas and Salam Fayyad reject Israel's right to exist. They support terrorism. They already rejected a "two-state solution" less than two years ago. Aside from that, they lack the support of their own electorate which prefers Hamas's more direct approach to destroying Israel.

Instead of pretending that begging these impotent adversaries for peace serves its interests, Israel should get off its knees and adopt policies that will enhance its interests. For instance, given that the Obama administration views Ramat Shlomo as the equivalent of Eli and E-1, Israel should build up the neighborhood in Eli that was home to fallen IDF commanders Majors Ro'i Klein and Eliraz Peretz and implement its construction plans for E-1.

Ironically, all of these policies are consonant not only with Israel's strategic needs, but with the US's own strategic interests. And since Obama's hostility towards Israel is not subject to change, rather than focus on winning over the White House, the Netanyahu government should devote its energies to selling its policies to the American people.

Repeated polls have shown that the American public supports an Israeli strike against Iran's nuclear facilities. By the same token, commonsense policies towards the likes of Fatah, Hamas, Hizbullah, Syria and Turkey, combined with the unapologetic assertion of Israel's rights in Jerusalem, Judea and Samaria will find a strong core of support in the US that can offset some of the damage Obama is doing to US ties with Israel.

Although much maligned, Emmanuel's call not to let a good crisis go to waste can be taken as a crass way of saying that every cloud has a silver lining. Israel did not ask for this fight with Obama. It would have been willing to keep up the fantasy that Bush's second-term policies made sense. But since a fight is what it got, Israel has no choice other than to strike out on its own. As it happens, if Israel does so, not only will it protect itself, it will protect the US from the dangerous policies its leader has opted to pursue.