Q. This is something that has been weighing very heavily on my heart for the past couple of years. I have always gone to church on Sundays (among several other nights of the week as well), but the main worship service is held on Sunday Mornings. But in the last few years, I have wondered if maybe we're all in error regarding this—as it was the Catholic church who changed the Sabbath day from Saturday to Sunday—not God. I haven't been able to find one scripture where God instructed us to move or change the Sabbath Day...so aren't we all breaking commandment number 4 by attending our church services on Sundays? I mean it seems to reason that if we are still NOT to murder, steal, commit adultery, lie etc., why wouldn't we also still be required to observe the Sabbath Day as God commanded? (and NO I am not a Seventh Day Adventist—but I have been wondering if that is the one thing that they did get right).

I see that in Exodus 20:8 (10 Commandments) that God does say that we are to "Remember the Sabbath and keep it Holy"; and I see that in the New Testament, that in John 14:15 Jesus does say "If you Love Me, you will keep My Commandments."

So like I said, it just seems like we all know that we aren't supposed to murder, steal, commit adultery, lie etc., but for some reason we (all of us who attend church on Sundays) have decided that we don't have to obey that one commandment. I know that we are not to treat God's word like a Burger King menu and pick and choose which Scriptures we feel like following—so how is this any different?

This has been a constant worry of mine for the last couple of years after hearing a pretty popular TV Bible Teacher say that those of us who do not observe the Sabbath would suffer the consequences of our disobedience regarding this, so I would really appreciate it if you could shed some light on this so that I can have a better understanding and peace about it in my heart once and for all. 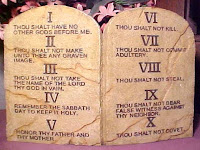 This is a large topic with many subtleties which I cannot address in the space available to me here. But after we survey some of the related issues, I hope we can come to a point of clarity based on some clear principles found in Scripture.

First, let’s look at some of the more common views which Christians hold in regard to the Sabbath:

There are numerous problems, in my assessment, with the first two of these views:

Individual Christians are to model their behavior after the moral precepts of God—which are certainly expressed in the moral portions of the law, especially as highlighted in the Ten Commandments. But they are free in regard to "keeping the law" as a means of righteousness. One believer may choose to set aside a day "unto the Lord" and another may not. Either way, it is important that neither impose their preference on the other and that both realize that the law is not the primary motivator or focus for the believer now that Christ has come and fulfilled it in Himself (Gal. 5:4). We have already fulfilled the righteous requirements of the law through our identification with Christ and now we have entered His rest—Christ is now our Sabbath (Heb. 4:1-11).

Paul told the Galatians to resist those who would put them into bondage and guilt in regard to the freedom they now had in Christ:

Stand fast therefore in the liberty by which Christ has made us free, and do not be entangled again with a yoke of bondage. (Galatians 5:1)

Although Paul is here speaking about adding circumcision to faith, we need to guard against other additions to faith as well. So long as setting aside a day unto the Lord is not motivated by self-righteousness or legalism or imposed on others, we are free to do so.

If you examine closely the motives of many who teach that Sabbath observance is incumbent upon believers today, you will likely find aspects that are very similar to the Judaizers which were plaguing the Galatian church:

For not even those who are circumcised keep the law, but they desire to have you circumcised that they may boast in your flesh (Gal 6:13).