Islam: Don't Tread on Me

The U.S. Army and the Comedy Channel – which broadcasts the cartoon “South Park” - share a common fear: alienating Muslims. And, giving in to that fear, last week both exorcised views that threatened to alienate Muslims. Those actions empowered Islamic radicals, trampled freedom of speech and ignored legitimate criticism of Islam that endangers American security. 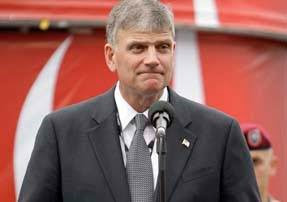 The Army rescinded an invitation for Christian evangelist Franklin Graham to speak at a Pentagon National Day of Prayer event. That decision was a reaction to criticism from groups like the Council of American-Islamic Relations that complained Graham “calls Islam evil and claims Muslims are enslaved by their faith.”

On the same day the creators of the television cartoon “South Park” received threats for airing a program depicting the Muslim prophet Muhammad in a bear costume. But the follow-on cartoon in the series bleeped out the name “Muhammad” for the bear because of an Islamic threat. The cartoonists said the Comedy Channel – not they – had decided to bleep out the name.

The “South Park” threat was posted on an Islamic website, which included an audio from a sermon in which the speaker says assassination is justifiable punishment for those who defame Muhammad. The man delivering the sermon is U.S.-born cleric Anwar al-Awlaki, an al-Qaeda leader and spiritual guide to U.S. Army Major Nidal Hasan, the Fort Hood jihadist murderer.

The Comedy Channel’s reaction is cowardly because it caved to intimidation. The website post said the cartoonists “will probably wind up like [the murdered] Theo van Gogh,” who made a movie that featured a beaten, naked Muslim woman covered in writings from the Koran. The post included a picture of the Dutch filmmaker with a knife protruding from his chest.

And the U.S. Army’s decision is equally cowardly – or worse - for a number of reasons. First and foremost, the actions of a government agency – one whose principal duty is to defend the nation – are much more significant to us and our enemies than those of comedy television. The Army’s action is a surrender on the ideological battlefield, one which we cannot afford.

The Army’s rescission is also cowardly because the Pentagon in general and the Obama Administration in particular, are desperately trying to cover-up Islam’s radicalizing threat.

First, the Army should have given Graham’s views about Islam a fair hearing. Graham said Islam “is a very evil and wicked religion” after the 2001 terrorist attacks on America. Later he wrote in The Wall Street Journal he does not believe Muslims are evil but “as a minister … I believe it is my responsibility to speak out against the terrible deeds that are committed as a result of Islamic teaching.”

Graham said what Islam does to women is “horrid.” “The brutal, dehumanizing treatment of women by the Taliban has been well-documented and internationally condemned,” he wrote for The Covenant News. He points out that “abusive treatment of women in most Islamic countries is nearly as draconian.”

Islam is intolerant of other faiths, Graham said. “The persecution or elimination of non-Muslims has been a cornerstone of Islamic conquests and rule for centuries,” said Graham. “The Koran provides ample evidence that Islam encourages violence in order to win converts and to reach the ultimate goal of an Islamic world. Conversions from Islam to any other faith are often punishable by death.”

He noted the abusive treatment of non-Muslims by the Islamic government in Sudan. Graham said Samaritan’s Purse has a “hospital in Southern Sudan [that] was bombed seven times by the Islamic regime in Khartoum.” The Khartoum government killed two million innocent Christians and animists in recent years, he said.

There is no freedom of religion in Islamic countries, including so-called moderate Islamic states such as Saudi Arabia. “It is a crime to build a Christian church, Jewish synagogue, Hindu temple or any other non-Muslim house of worship,” said Graham. In contrast, he said, “There are about 3,000 mosques in the U.S.” While Muslims are free to worship Allah in the U.S., Christians are not free to worship Jesus in most Muslim countries and soldiers in those lands must hide their crosses and Bibles.

Graham wants Westerners to understand the problem with true Islam. “We have many Muslims that live in this country, but true Islam cannot be practiced in this country,” said Graham. He explains, “You can’t beat your wife [here]. You cannot murder your children [in America] if you think they’ve committed adultery.” Both practices are tolerated in countries with true Islam.

Second, the military and the Obama Administration can keep truth speakers like Graham out of the Pentagon, but ignoring the facts about the radicalizing influence of Islam is dangerous for our security.

It was painful to watch the Fort Hood massacre and it hurt more because the killer was a soldier. But the Pentagon added insult to injury when it posted the 86-page review of the massacre without a single mention of the words “Muslim,” “Islam,” “Sharia” (Islamic law) or “Koran” despite the fact that Major Hasan maintained undisputed contacts with a known Islamist terrorist, compiled a history of making hateful, anti-American statements and reportedly yelled “Allahu Akbar” [Allah is great] as he shot 43 fellow soldiers.

Former Army Secretary Togo West, who co-led the Fort Hood review for the Obama Administration, dismissed concerns about Hasan’s religion. “Our concern is not with the religion,” West told Pentagon reporters.

Obama’s comments following the massacre dodged the Islam issue as well. The President said, “We have seen, in the past, rampages of this sort. And in a country of 300 million people, there are going to be acts of violence that are inexplicable.” This non-statement avoids Islam’s culpability and reflects Obama’s ongoing campaign of seeking a “new beginning” in the relationship between the U.S. and the Muslim world.

Last summer Obama went to Cairo, Egypt, to launch his “new beginning” campaign with the Muslim world. He told that audience “Islam has demonstrated … religious tolerance” and he promised “to fight against negative stereotypes of Islam.” He said “America is not – and never will be – at war with Islam” and “Islam is not part of the problem in combating violent extremism – it is an important part of promoting peace.” These comments set the tone for exorcising any negative references to Islam’s association with terrorists from government communications.

That hands-off-Islam campaign is reflected in Obama’s important national security documents. The 2010 Quadrennial Defense Review, a 128-page report that sets out the military’s future strategy and force structure describes the country’s terrorist threat without using the words “Islam,” “Islamic” or Islamist” a single time.

Very soon Obama will publish his first national security strategy. The Washington Times reports that document removes religious terms such as “Islamic extremism” and is rewritten to emphasize the U.S. does not view Muslim nations through the lens of terror.

While the Obama Administration tries to implement government control as in Orwell’s famous 1984 by banning Islamic references and putting them down the memory hole, our soldiers know better. The ground truth about Islam is that it is undeniably linked to radicalism which endangers America and our military should not pretend otherwise.

May 20th is Everybody Draw Mohammed Day; Get Ready for Mohammed Cartoons to Flood the Web - Associated Content

Obama: America Not Christian - But Islam Shaped It For The Better - Right Side News (Don Feder)