If safeguarding international security is the chief aim of US President Barack Obama's foreign policy, then at some point he can be expected to change course in the Middle East. For today, Obama faces the wreckage of every aspect of his Middle East policies. And largely as a consequence of his policies, the region moves ever closer to war. 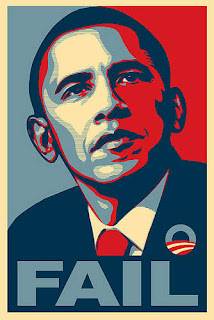 In Iraq, Obama's pledge to withdraw all combat forces from the country by the summer has emboldened the various forces vying for control of the country to set it ablaze once more.

In Afghanistan, Obama's surge and leave policy has left would-be US allies hedging their bets, at best. And it has caused the US's NATO partners to question the purpose of their deployment in that country.

Then there is Iran. Last week's report by The New York Times that this January Defense Secretary Robert Gates penned a memo to National Security Advisor James Jones warning that the Obama administration has no effective policy for dealing with Iran's nuclear weapons program exposed the bitter truth that in the face of the most acute foreign policy problem they face, Obama and his crew are out to lunch.

Gates's attempt to mitigate the story's impact by claiming that actually, the White House is weighing all its option only made things worse. Even before the ink on his correction note was dry, his Undersecretary of Defense for Policy Michele Flournoy was telling reporters in Singapore that the military option, "is not on the table in the near term."

Iran for its part continues to escalate its menacing behavior. Last week its naval forces reportedly interdicted a French ship and an Italian ship navigating through the Straits of Hormuz.

President Shimon Peres's announcement last week that Syria has transferred Scud missiles to Hizbullah in Lebanon was a sharp warning that Iran and its underlings are diligently preparing for war with Israel. It also demonstrated that the Obama administration's attempts to use diplomacy to coddle Syria away from Iran have failed completely.

Administration officials' statements in the wake of Peres's bombshell make clear that Syria's bellicose actions have not caused the US President to reconsider his failed policy. Obama's advisors responded to the news by irrelevantly boasting that their policy of "engagement" enabled them to bring the matter up with their Syrian interlocutors three times before Peres's announcement and once more after he made the statement.

And that's not nearly the end of it. As Secretary of State Hillary Clinton announced last week, soon the Obama administration will expand its dialogue with Syria by returning the US ambassador to Damascus for the first time since Syrian President Bashar Assad ordered the assassination of former Lebanese prime minister Rafik Hariri five years ago. That is, Obama has chosen to respond to Syria's open brinkmanship by rewarding Assad with newfound legitimacy and panache.

And that's still not the worst of it. What is worst is that Obama's advisers openly admit that they have no idea why Syria remains a rogue state despite their happy talk. As one administration official told Foreign Policy, understanding why Syria - Iran's Arab client state - is acting like Iran's Arab client state is, "the million dollar question."

"We do not understand Syrian intentions. No one does, and until we get to that question we can never get to the root of the problem," the official told the magazine.

But while they wait for the Oracle at Damascus to decode itself, they are content to continue wooing Assad as he provokes war.

Then there are the Palestinians. After rejecting Obama's envoy George Mitchell's latest plea to conduct indirect negotiations with Israel, Palestinian Authority Chairman Mahmoud Abbas explained that Obama's own statements have convinced the Palestinians that there is nothing to negotiate about.

As he put it, "Since you, Mr. President, and you, the members of the American administration, believe in [the urgent need for a Palestinian state] it is your duty to call for the steps in order to reach the solution and impose the solution. Impose it. But don't tell me it's a vital national strategic American interest... and then not do anything."

Finally there is Israel. In the same week that the Chairman of the Joint Chiefs of Staff Admiral Michael Mullen refused to rule out the possibility that the US will shoot down Israeli jets en route to attack Iran's nuclear installations, and Obama again blamed Israel for the deaths of US soldiers in Iraq and Afghanistan, Jim Jones tried to reassure Jewish Democrats that despite the administration's hostile actions and statements, it is not hostile to Israel.

Jones's speech was part of a very public outreach plan the administration adopted last week in the face of a groundswell of American Jewish anger at Obama for his adversarial posture towards Israel. Given that American Jews have been the Democratic Party's most secure voting bloc since 1932, recent polls showing that the majority of American Jews oppose Obama's treatment of Israel are a political earthquake.

According to a Quinnipiac poll published last week, a whopping 67 percent of American Jews disapprove of Obama's handling of the situation between Israel and the Palestinians. A poll of American Jews taken by John McLaughlin earlier this month showed that a plurality of American Jews would consider voting for a candidate other than Obama in the next presidential elections.

And on Israel, American Jewish disapproval of Obama is fully consonant with the views of the general public. As the Quinnipiac poll shows, only 35 percent of Americans approve of his treatment of Israel.

Jones's speech before the Washington Institute for Middle East Policy was a friendly affair. He waxed on dreamily about how wonderful the US's alliance with Israel is and how much Obama values Israel. And the crowd rewarded him with a standing ovation.

But the substance of his speech made absolutely clear that while Obama and his advisors are concerned that for the first time in 80 years a significant number of American Jews may abandon the Democratic Party, they are unwilling to pay even the slightest substantive price to keep the Jews loyal to their party.

After he finished his declarations of love and his joke about crafty Jewish businessmen in Afghanistan, Jones made clear that the Obama administration continues to view Israel's refusal to surrender more land to the Palestinians as the key reason its efforts to convince Iran to give up its nuclear program, the Syrians to quit the Iranian axis, the Palestinians and the Lebanese to quit the terror racket and the Iraqis and the Afghans to behave like Americans have all failed.

As he put it, "One of the ways that Iran exerts influence in the Middle East is by exploiting the ongoing Arab-Israeli conflict. Iran uses the conflict to keep others in the region on the defensive and to try to limit its own isolation. Ending this conflict, achieving peace between Israelis and Palestinians, and establishing a sovereign Palestinian state would therefore take such an evocative issue away from Iran, Hizbullah, and Hamas."

Jones, Obama and the rest of their gang must have been asleep when the Saudis, Egyptians, Jordanians and the rest of the Arabs told them that Iran is unrelated to the Palestinian issue and that Iran must be stopped from acquiring nuclear weapons regardless of the status of Israeli-Palestinian relations. This after all has been the main message communicated to Obama and his advisers since January 2009 by every Sunni-majority state in the region as well as by many Iraqi Shiites.

They must have been at the golf course when their generals in Iraq and Afghanistan warned them about Iran providing weapons and training to irregular forces killing US servicemen.

The fact that even as he faced a Jewish audience, Jones couldn't resist the temptation to repeat the central fallacy at the root of the administration's failed policies in the Middle East makes clear that the Obama administration fundamentally does not care that the American people as a whole and the American Jewish community specifically oppose its policies. They will continue to push their policies in the face of that opposition no matter what. And if American Jews want to leave the party, well, they shouldn't slam the door on their way out.

The Obama administration's treatment of New York Senator Charles Schumer this week is case in point. Schumer has been one of Obama's most loyal supporters. If as expected Senate Majority Leader Harry Reid loses his reelection bid in November, Schumer is in line to replace him as the Democratic leader in the Senate.

Yet this week, responding to what has likely been an enormous outcry from his constituents, Schumer blasted Obama for his shabby and dangerous treatment of Israel. Rather than respond graciously to Schumer's criticism, Obama's spokesman Robert Gibbs dismissed it sneeringly saying, "I don't think that it's a stretch to say we don't agree with what Senator Schumer said in those remarks."

No doubt Netanyahu is correct. Moreover, the politics of such a move would make sense for him. Whereas Obama's decision to ram the nationalization of the US healthcare industry through Congress against the wishes of the American public caused his personal ratings and those of his party to plummet, were Obama to decide to take on Iran, he would win the overwhelming support of the American public. Indeed, a determined and successful bid by Obama to block Iran's nuclear aspirations could potentially block what is currently looking like a midterm election catastrophe for his party in November.

But as Gates's memo about Iran, Clinton's announcement that the administration will go ahead with its plan to dispatch an ambassador to Damascus, Mitchell's latest failure with the Palestinians, Jones's newest accusation against Israel, and the US's strategic incoherence in Iraq and Afghanistan all show, mere politics are irrelevant to Obama. It doesn't bother him that his most loyal supporters are abandoning him. It doesn't matter that his policies have endangered the Middle East and the world as a whole.

Iran, not Israel, will start the war - International Analyst Network