It becomes increasingly difficult each week to determine which Bible prophecy indicator to examine in the "Nearing Midnight" column because so many signals of possible prophetic import beckon - no matter which way on the geopolitical, socioeconomic, geophysical, or religious world horizon one looks.

So, because of length limitations, I've chosen only two items of likely prophetic significance for this update. Had we no such limits, the number of news items of possible prophetic relevance would be overwhelming, the stage-setting for Bible prophecy fulfillment is so prolific. 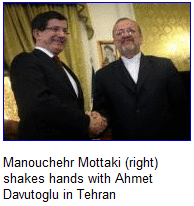 The first of the items that stir prophetic ponderings is the nation Turkey and its "willingness" to involve itself in diplomacy between the West and Iran's development of its nuclear program. Turkey's foreign minister, Ahmet Davutoglu, after holding talks with his Iranian counterpart, Manouchehr Mottaki, indicated that Iran says Turkey is welcome to mediate to some extent the Western and Iranian governments' standoff with regard to Iran's nuclear technology development.

Western governments object to the Iranian nuclear program because they fear the purpose of the program is to produce nuclear weapons, not to produce electrical energy. The objection is logical because Iran has oil riches that would provide petroleum-based electric power for that nation for many decades into the future.

Iran's President Mahmoud Ahmadinejad has taken practically every speaking opportunity to state that he intends to wipe Israel off the map. Israel is growing impatient with Western attempts to deal gingerly with the Iranian regime. Sanctions in order to make Iran be more forthcoming in proving its nuclear efforts are peaceful haven't proved effective, and at any rate, are most often never fully implemented. It becomes increasingly evident to the Jewish state's top leadership that a military solution might well be the only solution to the threat to their security.

Turkey is currently a member of the UN Security Council. It supports Iran's right to pursue peaceful nuclear development. But Turkey, at the same time, is officially against all nuclear weapons development. There will come a time when Turkish leadership will have to either side with the Western concerns - thus with Israel - or with Iran, if the Iranians refuse to provide absolute proof its intentions are peaceful nuclear usage.

Togarmah is the name for the ancient territory now primarily occupied by Turkey. The people of Togarmah are prophesied to join the Persian (primarily present-day Iran) in the Gog-Magog attack of Ezekiel chapters 38-39. Recently, the government of Turkey has changed dramatically from an administration friendly to the West and Israel to one openly hostile in its rhetoric to the Jewish state.

This is partially true because Turkey is dependent upon Iran to supply much of its natural gas for energy. However, the Islamic ties are an increasingly powerful influence that binds together these prophetically intertwined peoples.

The rapid movement of Turkey as of late from the Western sphere of influence into the Eastern - particularly into the radical Islamic camp - calls for increased watchfulness.

The second of the stage-setting developments for fulfilling Bible prophecy I would like to look at is the internal pressures building within the European Union (EU).

The excerpt of an article that follows, in my view, encapsulates to some extent the powerful dynamics that are in the process of rearranging things for the reviving Roman Empire of Bible prophecy.

A Citigroup note to clients has warned that the eurozone is likely to fall apart unless the European Union's member states fuse both on the fiscal and political level.

"Europe needs to stand up and decide if it is going to be a 'United States of Europe' or a 'patchwork quilt' of independent states," reads a note by Tom Fitzpatrick, chief technical analyst at Citigroup in New York...

Investors are warning of threats to the European currency even if the Greek crisis is resolved...

In February this year, hedge fund wizard George Soros also warned the eurozone was bound to break up without fiscal union. (Lee Phillips, "Citigroup Says Only ‘United States of Europe' will Save Euro," Headline News, 4/21/10).

There is great concern building over the euro's continuing downward slide. For example, it has declined 6.1 percent against the U.S. dollar in recent days. The instability and fluctuations are causing the monetary powers that be, particularly in the Western economies, to seek a single currency, ultimately. The EU is the developing model around which many believe the future one-world integration of all things fiscal must be built.

Antichrist, the biblically prophesied final world dictator that is to take power before Christ's return, will come out of the area of western Europe, according to Daniel 9:26-27. His power will be derived largely from world economic power represented by the ten kings and ten kingdoms of Revelation 17:12-13.

The control of all buying and selling through a numbering-and-mark system is foretold in Revelation 13:16-18, indicating - most biblical eschatologists believe - a supercomputer system of keeping track of all transactions. Certainly, most all of the ingredients for the biblical end-times formula are in focus today. Therefore, the stupendous twinkling-of-an-eye moment of Christ's call to His church - all born again believers - must be near.