Will God “Approve” of the Third Temple?

We just returned from leading another tour in the beautiful land of our Lord, Israel. And even though we have a very knowledgeable guide named Avi Shemesh to explain each site we visit, there are certain holy sites where I like to address our tour group. One of those places is called “Dominus Flevit” (Latin meaning “The Lord wept”) on the Mount of Olives. It is the traditional site on Mount Olivet where our Lord looked over the city of Jerusalem and wept as He prophesied of the day of its destruction when “they shall not leave in thee one stone upon another; because thou knewest not the time of thy visitation” (Luke 19:37-44).

I like to lecture at this spot not because Jesus wept there, but because from there we have a beautiful panoramic view of Mt. Moriah across the Kidron valley, and more specifically, that area of Mt. Moriah that we call the Temple Mount.

Today, the Muslim shrine known as the Dome of the Rock stands at the center of the paved platform atop the mount. But, of greater significance is that somewhere on that mountain stood both the first and second Jewish Temples. And, it will also be the site where the coming Third Temple will be built, although today there is much debate about exactly WHERE on the Temple Mount the Third Temple should be located.

Inside the Dome of the Rock, there is a rock protrusion from the mountain’s bedrock that is referred to as the “Foundation Stone”. It is believed that it was upon this stony protrusion on Mt. Moriah that God led Abraham to lay Isaac, his son, and attempt to offer him as a sacrifice unto the Lord (Gen. 22). It is also believed by many that it was on that same rock that the Ark of the Covenant sat in the Holy of Holies of the Temple.

Jewish tradition holds that the Third Temple must be built in exactly the same spot as the two previous temples. So, for many years, it was the consensus that the Dome of the Rock would have to be destroyed… possibly by an act of God, like an earthquake, or by some act of man, like an explosion… in order to build the temple there. 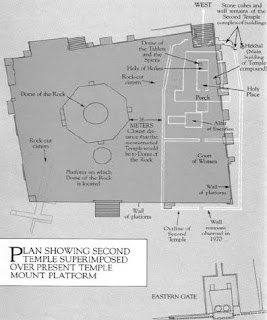 But from that beautiful vantage point on the Mount of Olives, I introduced another possibility to our tourists: In 1977, Dr. Asher Kaufman of Hebrew University published his study showing that the proper placement of the Temple is NOT where the Dome of the Rock stands, but just to the north of it on the huge open pavement that we refer to as the “northern platform”. This placement would allow about eighty-five feet to separate the wall around the inner court of the Temple from the closest point on the Dome of the Rock. (See March, 2005 issue of reMEMber for a full explanation) [1]

The next day, we went up on the Temple Mount and walked from the southern side of the Dome of the Rock around to the northern platform where I continued my lecture. Standing in the very spot where Dr. Kaufman insists the Temple must be built, I added another element to this story by raising the question, “Is it possible that someday the Third Temple will be built here NEXT TO the Dome of the Rock? Is it possible that one day both structures will sit side by side and the Muslims and the Jews will SHARE the Temple Mount?”

As I made this point, I provoked some serious objections from our Jewish guide, Avi… just as I knew I would. The idea of the Jews and Muslims sharing the Temple Mount and having their structures sitting side by side is very offensive to both the Jews and Muslims. Their hatred for one another completely blinds them to the possibility of such a sharing arrangement.

I have known Avi for almost twenty years and I have a pretty good knowledge of what he believes. Before I even brought this point up, I knew he would object to it. He accepts the idea of the placement of the Third Temple on the northern platform, but NOT with the Muslim edifices sharing the Temple Mount. As he would say, “Absolutely not!”

Sure enough, as I made this point, he could not stay silent. He spoke up and said that such an arrangement is an impossibility! I reminded him that with God all things are possible (Matt. 19:26). From man’s perspective… from our knowledge of the present geopolitical situation, it may look impossible. But what is impossible to man is very possible to God. Or, as Avi himself would say, “Man thinks one way. God thinks another way.”

At this point, Avi gave his “theological proof” as to why both religions could never share the Temple Mount. He said, “Our God is a jealous God. And He would never allow His Temple to sit next to the pagan shrine (Dome of the Rock).” At first, this argument may sound reasonable. But, it is in fact, totally wrong and this is really the subject that I want to address in this article.

First of all, there is no doubt that our God is a “jealous God”. He even says so in the second commandment (Ex. 20:4-5, Deut. 5:8-9) and the point is reiterated in several other Scriptures (Deut. 4:24, 5:9, 6:15, Josh. 24:19). Exodus 34:14 even says that one of God’s names is “Jealous”. But in every instance in the Scriptures, the idea of God being a “jealous God” is expressly used to show His intolerance of His people worshipping other gods (false gods). It is never used to suggest that God will not allow false gods to be worshipped by other people, even in the vicinity of His own people. OT history shows that the Israelites were always surrounded by people worshipping false gods. Was God pleased with this? Of course not! But He allowed it. Is God pleased that the Dome of the Rock (a pagan shrine) is sitting on the Temple Mount? No. But He has allowed it for some 1300 years. God’s “jealousy” is over His people, not a building. It is very important that we do not misapply Scriptural terms to justify our own positions.

Secondly, and far more importantly is the answer to this question:

Will God Approve of the Third Temple?

The answer to this is a resounding NO. So, the idea that God’s “jealousy” will not allow “His” Temple to share the Temple Mount with the Muslims is without basis because God will not be in or approve of the Third Temple and its apostate worship!

This does not mean that God will not allow it to be built. In fact, we know that His Word prophesies of many sinful things that He will allow to come to pass that He does not approve of (the blasphemies of the Antichrist, the apostasy of the last days humanity, etc.)

So, maybe the question that really gets to the crux of the matter is:

Why Is the Third Temple and It's Worship Through Animal Sacrifice an Apostate Worship?

From a New Testament Christian perspective, this is easy to answer…
When the blood of our Savior was spilt on Calvary, He became the perfect and final sacrifice for our sin (Heb. 9:26,28). John the Baptist identified Him as the “Lamb of God” (John 1:29). As such, He became the perfect sacrifice that once and for all time replaced the need for the OT animal sacrifices which could only temporarily cover the sins of the people and had to be continually repeated (Lev. 17:11). The OT sacrifices could not permanently take away a person’s sins (Heb. 10:4). God's perfect justice could only be served in the death of His Son, Jesus Christ, Who "not with the blood of goats and calves, but with His own blood He entered the Most Holy Place once for all, having obtained eternal redemption" (Heb 9:12).

So, when Jesus “yielded up the ghost” (died) on the cross, the veil in the Temple… the veil beyond which only the High Priest could go to offer the annual sacrificial blood… was torn in two from the top to the bottom (Matt. 27:50-51), showing that it was an act of God, not man. No longer would it be necessary for a priest to intercede in our behalf. From that point and forever, Jesus would be our High Priest Who would intercede in our behalf (Heb. 4:14-16) and allow us to “come boldly unto the throne of grace, that we may obtain mercy, and find grace to help in time of need.”

To reinstate the animal sacrifice system is to deny the sufficiency of our Lord’s death as payment for our sins (Heb. 9:12-14). Paul made it clear that we are “justified freely by His grace through the redemption that is in Christ Jesus” (Rom. 3:24). Basically, the whole theme of the book of Hebrews is to show that the new covenant that we have in Jesus Christ is fully superior to all that has gone before Him (the animal sacrifices, the priesthood, the temple worship, etc.).

But you might ask, “Why does Ezekiel describe the coming animal sacrifice system that will be operational in the Millennial Kingdom?”

First, it should be noted that the Millennial Temple will be the FOURTH Temple, the one built by the Lord Himself (Ezek. 40:5-43:27, Zech. 6:12-15) and from which the glory of the Lord will emanate (Isa. 40:5). And I assure you that there will be no pagan shrines in the vicinity of it or in competition with it.

The primary purpose of the Millennial sacrifices (Ezek. 46) will serve as a memorial to our Lord’s perfect sacrifice, just as the OT sacrifices symbolically pointed forward to it. They are not a reinstatement of the OT system at all because a careful comparison of the two will reveal many differences between them. [2]

So, to summarize… The first two Temples and the animal sacrificial system associated with them, were ordained of God as a symbolic picture of that perfect sacrifice that would come in the form of His own Son’s death. The Jews of the OT did them in obedience to God’s law, but not understanding the symbolic picture that they represented. When Jesus died on the cross, His perfect sacrifice made those animal sacrifices unnecessary. Unfortunately, most Jews today do not accept this and believe that the OT temple and its sacrifices must be reinstated in order to bring them into good standing with God. The Third Temple will be an attempt to do just that. However, those animal sacrifices can never accomplish what only our Lord’s death on the cross accomplished.

Do I anxiously await the building of the Third Temple? Yes. Not because it will bring back OT worship, but because it is associated with the Tribulation Period. It is just another sign that we’re getting close to the Tribulation… and therefore, even closer to the Rapture! And that’s exciting!