On this week's edition of "The Hal Lindsey Report": The earth shook again with deadly results. This time in Turkey. Dozens were killed and hundreds injured. That's three major or killer earthquakes in the last two weeks. And Chile has experienced a never-ending barrage of aftershocks, a couple powerful enough to trigger tsunami warnings.

As I mentioned last week, and discuss further this week, it makes no difference whether there are actually more earthquakes now than there were a hundred years ago. Today, we know about almost every one of them - and we know immediately. Jesus promised that in the last days, 'great' earthquakes would increase in various places. Until the latter part of the 20th Century, earthquakes were happening, but we didn't know about all of them. Our detection technology wasn't advanced enough to detect them all and our communication systems weren't pervasive enough to communicate the news worldwide. A couple hundred years ago, major killer earthquakes could happen on the other side of the world and we wouldn't know about them for weeks or months, if ever. Today, we're there before the tremors subside.

In this case, perception (because of knowledge and awareness) IS reality. Today, earthquakes occupy a major portion of our concern. Just as Jesus predicted. (If you don't believe me, ask the folks up and down the center of the USA who've experienced dozens of earthquakes over the last few weeks). 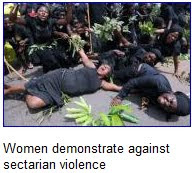 Another sort of tragedy struck central Nigeria this week. Muslim herders rampaged out of the hills surrounding Jos, Nigeria, and other nearby villages. They wielded machetes. When they were finished, more than 500 Christian villagers, including old folks and newborns, were hacked to death. Although this is just the latest example of the lethal tensions that are developing as Islam spreads its tentacles, it's also a warning about the hatred Jesus said will confront those who follow Him in this world. And it will grow stronger and more deadly as we approach the end of this Age.

I'll bet you didn't know this: last week was the sixth annual "Israeli Apartheid Week." It started on the campus of the University of Toronto (Surprise! Surprise!) and is now observed in 20 Western countries. And you just thought former President Jimmy Carter came up with the concept himself! The proponents of this ludicrous idea desperately try to equate Israel's security wall with the corrupt, immoral policy of suppression practiced by South Africa for decades. Their thinking is so clouded with political correctness (and more than a bit of naivete and irrationality), that they can't tell the difference between racism and self-defense.

For almost 300 years, Great Britain was the world's undisputed superpower. The sun never set on the British Empire - really! Then, in 1917, the British led the way in establishing 'Palestine' as the 'Jewish homeland' with the Balfour Declaration. But, by 1920, it started to cave to international and Islamic pressure. By 1939, the infamous 'MacDonald White Paper' completed the collapse and effectively closed 'Palestine' to immigration by European Jews trying to escape the oncoming Holocaust. This cowardly about-face arguably put more Jews into Nazi gas chambers than any other single diplomatic act. Even then, Britain continued to manage the affairs of Jews and Arabs in Jerusalem and 'Palestine' under the British Mandate.

When Britain finally retreated from Jerusalem and abandoned Israel in 1948, it was a hollow shell of its former self.

In 1993, the United States of America was enjoying its 'peace dividend.' After decimating Saddam Hussein's vaunted military, built on Soviet weaponry; after watching the utter collapse of the Soviet Union, the end of the Cold War, and the liberation of a group of new 'friends' from the grip of the Soviets; after finally spotting a balanced budget on the horizon and watching the National Debt Clock actually start to run backwards, President Bill Clinton decided to tackle the problem of peace in the Middle East as the crowning achievement of his young presidency. He felt he could solve the impasse. Sound familiar?

The prophet Zechariah warned that anyone who decides to tackle the problem of Jerusalem will be "cut in pieces." This week, we'll assess where America stands 17 years on from the signing of The Oslo Accords and the beginning of our earnest meddling in Israel's affairs.

Damage From Chilean Quake Estimated to be $30 Billion - FOX News