There is a booming business in economic doom. I have noticed a huge increase in the number of blogs and YouTube videos that talk about the growing debt crisis. I have several people who send me a flood of news stories on financial matters.

The latest reports on America 's national debt have been stunning. The Treasury Department said that the February deficit totaled $220.9 billion, which is 14 percent higher than the previous record set in February of last year. The deficit through the first five months of this budget year totals $651.6 billion - 10.5 percent higher than a year ago. 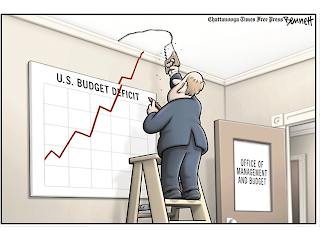 There is a huge gap between the money coming in and the money being paid out. Last month, the Fed reported outlays of $328.4 billion and revenues of $107.5 billion. If the U.S. government took 100 percent of all citizens’ net income, the tax receipts generated would not be enough to balance the budget.

America is running on credit. In the past two years, the operating cost of the federal government went from $5.122 trillion to $7.805 trillion. That's almost ten percent of GDP in net fed spending to prop up consumption and output. The dilemma we face is like someone who is taking a drug that keeps his heart functioning, while at the same time, the drug is eating away at his lungs and kidneys.

The look down the road is very dire. The nonpartisan Congressional Budget Office said last week that Obama's proposed budget would add more than $9.7 trillion to the national debt over the next decade. Even if the economy recovered from recession, we would still see trillion-dollar deficits. By 2020, a third of all taxes would go to just paying $800 billion in interest on the debt.

The problem is not just with the federal government. Several U.S. states are walking financial zombies. California, New Jersey, Illinois, etc. are running deficits and debt levels that are far worse than those of Washington D.C. in percentage terms.

The state of Illinois fits all the classic measures that one would apply to a bankrupt company. Governor Pat Quinn has stopped paying some debts as his state faces a $13 billion budget deficit.

As I pointed out last week, the debt problem is not just in the U.S. and Greece. Iceland and Great Britain have also been showing up on the radar.

The Icelandic people overwhelmingly rejected a plan to pay $5.3 billion to Britain and the Netherlands to reimburse customers of a failed Icelandic bank. The referendum has now put Iceland 's credit rating into question.

Britain is on course to borrow the equivalent of 12.8 percent of GDP for this fiscal year, exceeding the 12.7 percent forecast in crisis-hit Greece and far above the average 6 percent for Europe. Britain ’s debt-to-GDP ratio is forecast to reach 82 percent this year, almost double the level two years ago.

Greece is already proving how difficult it is to deal with an out-of-control budget. The Greek government cut spending by 3 percent, and the result was rioting in the streets of Athens. The plan is to cut spending by another 3 percent in both 2011 and 2012. If people are unhappy now, it may lead to revolution when these planned cuts kick in.

The current problem reminds me of what happened in the 1980s when the Soviet bloc suddenly collapsed like a row of dominoes. It was amazing to see one communist government after another fall to some force that they were powerless to resist. I think it is obvious that God decided the time of the communist empire was up, and He caused its downfall.

The fact that we have the U.S., Japan, and the lion's share of European nations on the edge of a financial collapse from too much debt tells me that another radical transformation event is about to unfold. There are just too many nations in play for the situation to be coincidental.

What makes the possibility of a financial meltdown so fitting to the subject of Bible prophecy is the fact it would "kill two birds with one stone." First, a financial meltdown would set the world up for the mark of the Beast system; second, it would be a clear indication that God is removing His hand of protection.

The timing of the rapture would also matter because the ultimate removal of protection will involve the removal of the Church itself. When the Church is gone, the restraining factor will leave with it, and the devil will be free to do as he pleases.

“And when these things begin to come to pass, then look up, and lift up your heads; for your redemption draweth nigh" (Luke 21:28).