Secretary of State Hillary Clinton told CNN news March 13, "The announcement of the settlements on the very day that the vice president was there was insulting." A State Department spokesman said that Clinton called Israel's Prime Minister Benjamin Netanyahu "to make clear that the United States considered the announcement to be a deeply negative signal about Israel's approach to the bilateral relationship and counter to the spirit of the vice president's trip." The Administration of the man who occupies the Oval Office is deeply upset that the Israeli government would announce plans to build homes on its land in East Jerusalem - especially during the visit of its vice president. 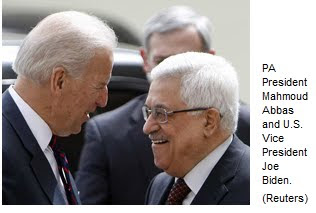 The Vice President stood side by side with Palestinian leaders during his visit to Israel and condemned Israel for its announcement. Vice President Joe Biden said that the Palestinians deserve a "viable and contiguous" independent state not broken up by Israeli settlements. The news media nor the current Administration ever mention that the plan is to carve out two pieces of land - Gaza on the West side of Israel and Judea and Samaria on the East side of Israel - and connect them by a strip of land dividing Israel in half. That's what they mean when they use the word "contiguous." Who in their right mind would agree to allowing a terrorist organization dressed in suits and ties to split their country in half?

But Biden, Clinton and the crew have shown their true colors to the Israeli government: Biden standing shoulder to shoulder with terrorists saying that Israel needs to play fair and Clinton giving Netanyahu a 43 minute tongue lashing for "embarrassing" Biden by announcing settlements when he was in Israel March 10th. Previous announcements by this Administration to boost the economies of Islamic nations that harbor terrorists, continuing and mounting pressure on Israel to appease the Palestinian movement, and this current very public diplomatic row over Israel building homes on its own land certainly puts into perspective where this Administration stands regarding Israel.

Israeli Ambassador Michael Oren was quoted by the Yedioth Ahronoth newspaper telling other Israeli diplomats in a telephone briefing, "Israel's ties with the United States are in their worst crisis since 1975 ... a crisis of historic proportions."

Ever wonder why there is such cataclysmic events happening to the United States politically and economically? There is a spiritual and physical side to all things. Physically, crooked socialist politicians are mismanaging America's policies, causing extraordinary calamity. Spiritually, in Genesis 12:3 the Lord speaks of Israel, saying, "And I will bless them that bless thee, and curse him that curses thee." The perfect storm against America may be brewing.

It's time for Bibi to ante up - CarolineGlick.com