Prophecy and the Book of Isaiah

"Hereupon the Persians who had been left for the purpose at Babylon by the river-side, entered the stream, which had now sunk so as to reach about midway up a man's thigh, and thus got into the town." - Herodotus

In 539 BC, Cyrus son of Cambyses took Babylon without a struggle. According to the Greek historian Herodotus, Cyrus diverted the course of the Euphrates river, making the river level drop and giving the invading forces the ability to enter into the city that night through the river bed. Nobody noticed them coming in, and the city gates that opened up onto the river were not closed; the Persians were able to just walk into town. Within a year, Cyrus declared that all the Jews captive in Babylon were free to return home to Jerusalem, as described in Ezra 1.

These two events - the taking of Babylon the Great without a battle and the magnanimous freeing of the Jews soon after - are both remarkable historical events in themselves. What makes them even more notable is the fact that God told about them in Isaiah 44:26-45:1, 13, appointing Cyrus by name 100 years before this son of Cambyses was born. 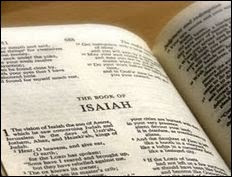 The Book of Isaiah is one of the most greatly admired and beloved books of the Bible. The New Testament writers quote Isaiah more than all the other Old Testament prophets combined. From a literary point of view, the writing of Isaiah is superb, full of parallelism and euphony; scholars savor Isaiah's obvious attention to the literary art of his writing.

In Isaiah 44 and 45, God not only describes the ease with which Cyrus would enter the city with the "two leaved gates" (gates that were not even shut against the invaders!) but also notes that He would "loose the loins of kings" before Cyrus – a euphemism regarding the fear these kings would feel and the mess in their pants they'd make as a result. As a matter of fact, about the time Cyrus' men were entering the city, King Belshazzar, second in command under his father Nabonidus, was being interrupted in his feast. A hand began to write on the wall to tell Belshazzar that his time was up. Daniel 5:6 puts in not-so-delicate terms how greatly the fear of this sight affected Belshazzar, saying, "his thoughts troubled him, so that the joints of his loins were loosed, and his knees smote one against another." Who says God isn't detailed!

In circles of modern liberal criticism, though, it has become popular to dismiss the idea, held for some 2500 years, that Isaiah son of Amoz wrote the entire book credited to his name. Old Testament scholars have found it fashionable to argue that there were at least two "Isaiahs", perhaps even three or more. These critics argue that it makes no sense for God to have foretold events that would not have taken place during the life of the prophet. They attempt to argue that the character of God in Isaiah 1-39 is far fiercer than the gentle God of Isaiah 40-66, that the language is different in the two sections, and that there are two different views of the Messiah between the first part of Isaiah and that written by the alleged Deutero-Isaiah. Ultimately, they do not believe that Isaiah could have written about Cyrus the Great in 700 BC. They cannot believe that the precise information in that prophecy could have been penned 150 years before it came to pass.

These criticisms can sound scholarly on the surface, but they depend far less on evidence than on a bias against predictive prophecy. While these scholars may believe that a bias against the supernatural - and the power of God to speak through His prophets centuries in advance - is scientific in this modern world, the truth is, it's still a bias. It's still just their opinion based on a humanistic worldview.

Honest scholarship strongly supports the historical view that Isaiah ben Amoz wrote the entire book with his name on it.

Historically, Isaiah has always been recognized as the author of all 66 chapters: Internally, Isaiah offers extensive evidence of one author: As Gleason Archer Jr. declared, "There is not a shred of internal evidence to support the theory of a Second Isaiah, apart from a philosophical prejudice against the possibility of predictive prophecy."

The ACU Commentary and the Unity of the Book of Isaiah - ChristianCourier.com

Case For the Unity of Isaiah - BiblicalResources.com

How Many Isaiahs? - Koinonia House