Homosexual Marriage in Our Nation's Capitol

Washington, DC is in the trouble of Biblical standards. This week is the first time in history that the nation's capitol will recognize allowing same sex couples the same benefits as married ones. They call it "gay marriage." But the very documents from which marriage is derived precludes members of the same sex from marrying. In Mark 10:6-9 Jesus said,

"But from the beginning of the creation God made them male and female. For this cause shall a man leave his father and mother, and cleave to his wife; and they twain shall be one flesh: so then they are no more twain, but one flesh. What therefore God hath joined together, let not man put asunder." 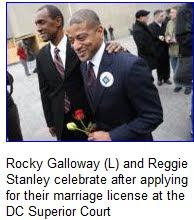 Therefore, there is no such thing as a "marriage" between two members of the same sex. It would defy, not redefine, the God given gift of marriage. Homosexuality is a sin that the Lord calls abomination. In Leviticus 18:22 the Lord says,

"Thou shalt not lie with mankind, as with womankind: it is abomination."

"If a man also lie with mankind, as he lieth with a woman, both of them have committed an abomination: they shall surely be put to death; their blood shall be upon them."

Abomination here means "morally disgusting," "an abhorrence." It would seem that homosexuals are trying to legitimize their actions by hijacking marriage in order to be socially accepted.

Homosexuals argue that mankind is no longer under the Old Testament - that the New Testament is about loving one another. The New Testament, however, condemns homosexuality in Romans 1:24-27,

"Wherefore God also gave them up to uncleanness through the lusts of their own hearts, to dishonor their own bodies between themselves: Who changed the truth of God into a lie, and worshipped and served the creature more than the Creator, who is blessed for ever. Amen. For this cause God gave them up unto vile affections: for even their women did change the natural use into that which is against nature: And likewise also the men, leaving the natural use of the woman, burned in their lust one toward another."

Sodom and Gomorah are widely known as towns where homosexuality was not only practiced, but encouraged. When the angels of the Lord came to Lot to warn him that the Lord was going to destroy Sodom, even the homosexuals lusted after the angels and tried to violate them. In fact, there were not ten righteous there that the Lord would not destroy them. The angle of the Lord said in Genesis 19:13,

"For we will destroy this place because the cry of them (their sin) is waxen great before the face of the Lord; and the Lord has sent us to destroy it."

Satan has placed the crown of homosexuality upon our nation's capitol by defiling marriage. What next?

What does the Bible say about gay marriage / same sex marriage? - GotQuestons.org