Why has President Barak Obama decided to foment a crisis in US relations with Israel?

Some commentators have claimed that it is Israel’s fault. As they tell it, the news that Israel has not banned Jewish construction in Jerusalem – after repeatedly refusing to ban such construction – drove Obama into a fit of uncontrolled rage from which he has yet to recover.

While popular, this claim makes no sense. Obama didn’t come to be called “No drama Obama” for nothing. It is not credible to argue that Jerusalem’s local planning board’s decision to approve the construction of 1,600 housing units in Ramat Shlomo drove cool Obama into a fit of wild rage at Prime Minister Binyamin Netanyahu.

Obama himself claims that he has launched a political war against Israel in the interest of promoting peace. But this claim, too, does not stand up to scrutiny.

On Friday, Obama ordered Secretary of State Hillary Clinton to present Netanyahu with a four-part ultimatum.

First, Israel must cancel the approval of the housing units in Ramat Shlomo.

Second, Israel must prohibit all construction for Jews in Jerusalem neighborhoods built since 1967.

Third, Israel must make a gesture to the Palestinians to show them we want peace. The US suggests releasing hundreds of Palestinian terrorists from Israeli prisons.

Fourth, Israel must agree to negotiate all substantive issues, including the partition of Jerusalem (including the Jewish neighborhoods constructed since 1967 that are now home to more than a half million Israelis) and the immigration of millions of hostile foreign Arabs to Israel under the rubric of the so-called “right of return,” in the course of indirect, Obama administration-mediated negotiations with the Palestinians. To date, Israel has maintained that substantive discussions can only be conducted in direct negotiations between Israeli and Palestinian officials.

If Israel does not accept all four US demands, then the Obama administration will boycott Netanyahu and his senior ministers. In the first instance, this means that if Netanyahu comes to Washington next week for the AIPAC conference, no senior administration official will meet with him.

Obama’s ultimatum makes clear that mediating peace between Israel and the Palestinians is not a goal he is interested in achieving.

Obama’s new demands follow the months of American pressure that eventually coerced Netanyahu into announcing both his support for a Palestinian state and a 10-month ban on Jewish construction in Judea and Samaria. No previous Israeli government had ever been asked to make the latter concession. 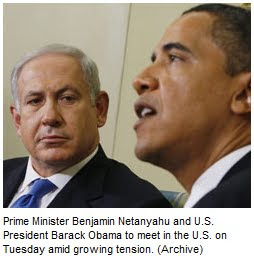 Netanyahu was led to believe that in return for these concessions Obama would begin behaving like the credible mediator his predecessors were. But instead of acting like his predecessors, Obama has behaved like the Palestinians. Rather than reward Netanyahu for taking a risk for peace, Obama has, in the model of Yasser Arafat and Mahmoud Abbas, pocketed Netanyahu’s concessions and escalated his demands. This is not the behavior of a mediator. This is the behavior of an adversary.

With the US president treating Israel like an enemy, the Palestinians have no reason to agree to sit down and negotiate. Indeed, they have no choice but to declare war.

And so, in the wake of Obama’s onslaught on Israel’s right to Jerusalem, Palestinian incitement against Israel and Jews has risen to levels not seen since the outbreak of the last terror war in September 2000. And just as night follows day, that incitement has led to violence. This week’s Arab riots from Jerusalem to Jaffa, and the renewed rocket offensive from Gaza are directly related to Obama’s malicious attacks on Israel.

But if his campaign against Israel wasn’t driven by a presidential temper tantrum, and it isn’t aimed at promoting peace, what explains it? What is Obama trying to accomplish?

There are five explanations for Obama’s behavior. And they are not mutually exclusive.

First, Obama’s assault on Israel is likely related to the failure of his Iran policy. Over the past week, senior administration officials including Gen. David Petraeus have made viciously defamatory attacks on Israel, insinuating that the construction of homes for Jews in Jerusalem is a primary cause for bad behavior on the part of Iran and its proxies in Iraq, Afghanistan, Lebanon, Syria and Gaza. By this line of thinking, if Israel simply returned to the indefensible 1949 armistice lines, Iran’s centrifuges would stop spinning, and Syria, al-Qaida, the Taliban, Hizbullah, Hamas and the Iranian Revolutionary Guards would all beat their swords into plowshares.

Second, even more important than its usefulness as a tool to divert the public’s attention away from the failure of his Iran policy, Obama’s assault against Israel may well be aimed at maintaining that failed policy. Specifically, he may be attacking Israel in a bid to coerce Netanyahu into agreeing to give Obama veto power over any Israeli strike against Iran’s nuclear installations. That is, the anti-Israel campaign may be a means to force Israel to stand by as Obama allows Iran to build a nuclear arsenal.

For the past several months, an endless line of senior administration officials have descended on Jerusalem with the expressed aim of convincing Netanyahu to relinquish Israel’s right to independently strike Iran’s nuclear installations. All of these officials have returned to Washington empty-handed. Perhaps Obama has decided that since quiet pressure has failed to cow Netanyahu, it is time to launch a frontal attack against him.

This brings us to the third explanation for why Obama has decided to go to war with the democratically elected Israeli government. Obama’s advisers told friendly reporters that Obama wants to bring down Netanyahu’s government. By making demands Netanyahu and his coalition partners cannot accept, Obama hopes to either bring down the government and replace Netanyahu and Likud with the far-leftist Tzipi Livni and Kadima, or force Israel Beiteinu and Shas to bolt the coalition and compel Netanyahu to accept Livni as a co-prime minister. Livni, of course, won Obama’s heart when in 2008 she opted for an election rather than accept Shas’s demand that she protect the unity of Jerusalem.

The fourth explanation for Obama’s behavior is that he seeks to realign US foreign policy away from Israel. Obama’s constant attempts to cultivate relations with Iran’s unelected president Mahmoud Ahmadinejad, Ahmadinejad’s Arab lackey Syrian dictator Bashar Assad, and Turkey’s Islamist Prime Minister Recep Tayyip Erdogan make clear that he views developing US relations with these anti-American regimes as a primary foreign policy goal.

Given that all of these leaders have demanded that in exchange for better relations Obama abandon Israel as a US ally, and in light of the professed anti-Israel positions of several of his senior foreign policy advisers, it is possible that Obama is seeking to downgrade US relations with Israel. His consistent castigation of Israel as obstructionist and defiant has led some surveys to claim that over the past year US popular support for Israel has dropped from 77 to 58 percent.

The more Obama fills newspaper headlines with allegations that Israel is responsible for everything from US combat deaths in Iraq and Afghanistan to Iran’s nuclear program, the lower those numbers can be expected to fall. And the more popular American support for Israel falls, the easier it will be for Obama to engineer an open breach with the Jewish state.

The final explanation for Obama’s behavior is that he is using his manufactured crisis to justify adopting an overtly anti-Israel position vis-à-vis the Palestinians. On Thursday, The New York Times reported that administration officials are considering having Obama present his own “peace plan.” Given the administration’s denial of Israel’s right to Jerusalem, an “Obama plan,” would doubtless require Israel to withdraw to the indefensible 1949 armistice lines and expel some 700,000 Jews from their homes.

Likewise, the crisis Obama has manufactured with Israel could pave the way for him to recognize a Palestinian state if the Palestinians follow through on their threat to unilaterally declare statehood next year regardless of the status of negotiations with Israel. Such a US move could in turn lead to the deployment of US forces in Judea and Samaria to “protect” the unilaterally declared Palestinian state from Israel.

Both Obama’s behavior and the policy goals it indicates make it clear that Netanyahu’s current policy of trying to appease Obama by making concrete concessions is no longer justified. Obama is not interested in being won over. The question is, what should Netanyahu do?

One front in the war Obama has started is at home. Netanyahu must ensure that he maintains popular domestic support for his government to scuttle Obama’s plan to overthrow his government. So far, in large part due to Obama’s unprecedented nastiness, Netanyahu’s domestic support has held steady. A poll conducted for IMRA news service this week by Maagar Mohot shows that fully 75% of Israeli Jews believe Obama’s behavior toward Israel is unjustified. As for Netanyahu, 71% of Israeli Jews believe his refusal to accept Obama’s demand to ban Jewish building in Jerusalem proves he is a strong leader. Similarly, a Shvakim Panorama poll for Israel Radio shows public support for Kadima has dropped by more than 30% since last year’s election.

The other front in Obama’s war is the American public. By blaming Israel for the state of the Middle East and launching personal barbs against Netanyahu, Obama seeks to drive down popular American support for Israel. In building a strategy to counter Obama’s moves, Netanyahu has to keep two issues in mind.

First, no foreign leader can win a popularity contest against a sitting US president. Therefore, Netanyahu must continue to avoid any personal attacks on Obama. He must limit his counter-offensive to a defense of Israel’s interests and his government’s policies.

While in Washington, Netanyahu should meet with every Congressman and Senator who wishes to meet with him as well as every administration member who seeks him out. Moreover, he should give interviews to as many television networks, newspapers and major radio programs as possible in order to bring his message directly to the American people.

Obama has made clear that he is not Israel’s ally. And for the remainder of his term, he will do everything he can to downgrade US relations with Israel while maintaining his constant genuflection to the likes of Iran, Syria, the Palestinians and Turkey.

But like Israel, the US is a free country. And as long as popular support for Israel holds steady, Obama’s options will be limited. Netanyahu’s task is to maintain that support in the face of administration hostility as he implements policies toward Iran and the Arabs alike that are necessary to ensure Israel’s long-term survival and prosperity.