Tony Blair to Launch Faith Foundation in US

"I'm really and always have been in a way more interested in religion than politics." - Tony Blair

In 2008, Tony Blair launched an effort dedicated to bringing different faiths together for reconciliation. When his Tony Blair Faith Foundation was started, Blair described as one of its major goals to "counter extremism in all six leading religions." He wanted to deal with global poverty and conflict and open up communication between people of different faiths in order to "educate, inform and develop understanding." Now that Blair has assembled a collection of influential religious leaders from the major world religions, he is preparing to embark on a "faith offensive" across the United States. Yet, while the slaughter of countless millions in the name of religion over the centuries has been horrific, and maintaining respect between members of various religions appeals to peace-loving people, some Christians worry that too much "reconciliation" will create a backlash for those who insist that Jesus alone is the way the truth and the life. 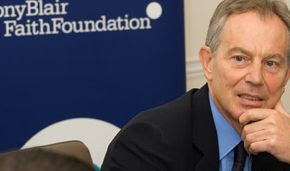 Tony Blair has assembled a variety of religious leaders for the advisory council of his Faith Foundation, including five Christian leaders, Hindu leader Anantanand Rambachan, Rabbi David Rosen and Rabbi Sir Jonathan Sacks, Mustafa Ceric, the Grand Mufti of Bosnia-Herzegovina and Dr. Ismail Khudr Al-Shatti, and has even brought in Professor Jagtar Singh Grewal on behalf of the Sikh religion.

The wealthy and socially liberal Canadian Belinda Stronach, once known as "Bubba's Blonde" for her alleged relationship with former President Clinton, sits on the advisory council as well. Along with championing liberal causes like gun control and abortion rights, Stronach is known for her philanthropic work, including co-founding Spread the Net to provide African families with mosquito nets as protection from malaria.

On the other side of the foundation's ideological wall is Pastor Rick Warren of Saddleback Church, which has a weekly attendance of nearly 20,000 people. Warren is considered one of the "15 world leaders who matter most" and sits on the council as a social conservative. Warren's presence on the advisory council may bother liberals because of his opposition to abortion and gay marriage. On the other hand, Warren's presence on the advisory council may upset some conservatives who do not think an influential conservative should be involving himself with a religious reconciliation group headed by a known globalist.

Warren says he joined the council because he believes Tony Blair's Faith Foundation is a good thing. He said, "It would be foolish to ignore how religious conviction impacts personal and national identity, poverty and education, extremism and reconciliation, disease and development, peace and progress. In any effort to help people learn to live and work together, we must engage the vast networks, resources, wisdom, and influence of the faith communities."

Other conservatives are worried that this foundation may be the start of something far broader and more spiritually sinister than just getting together to help people. In a brief interview in 2008, Blair said he defined extremists as "people who want to exclude the other if someone is of a different faith."

That loose definition could mean anything, and raises red flags for Christians who want to protect their freedom to declare that salvation is found only in Jesus – not out of prejudice or hatefulness, but out of dedication to the Bible as the Word of God (John 14:6; Acts 4:10-12).

Prof. Michel Schooyans of the Catholic University of Louvain has argued that, "In the case of the Tony Blair Faith Foundation, this is also a matter of promoting one and only one religious confession, which a universal, global political power would impose on the entire world."

Some Arab Muslims are skeptical of Tony Blair's effort as well because he has taken up the US and Israel's side in a variety of recent conflicts.

It is hard to tell if Blair, who left the Anglican Church in order to convert to Roman Catholicism in 2007, has left any of his New Age beliefs behind. Blair has said that his foundation would not focus on "doctrinal inquiry" or "subsume different faiths in some universal faith of the lowest common denominator." He told BBC News correspondent Christopher Landau last year, "If globalisation is a force pushing people together, does religion become a force pulling people apart? In the light of what's going on in the world, they are important themes to explore."

As Blair launches his potentially offensive "religious offensive" in the US, he may find a better reception than his foundation has gotten in Europe, where The Guardian last year said it just "inspired ridicule." At least, with 4.5 million pounds in the coffers, the group can buy a lot of mosquito nets, and will perhaps provide a rallying "peace peace" cry that the globalists so long to follow.

The “Wonderful” Deception of the Purpose Driven Paradigm - From the Lighthouse Blog (Warren B. Smith)