At a meeting in Moscow of the Middle East Quartet which is made up of the United States, the European Union, Russia, and the United Nations, the Secretary-General of the United Nations, Ban Ki-moon, told Israel to stop all kinds of building in its capital city of Jerusalem and Israel must do this now because it is undermining the peace process in the Middle East. Israel recently announced the building of 1600 new housing units in Jerusalem and world leaders have reacted very harshly to the Israeli announcement and the Quartet wants talks immediately with a Palestinian state within the next two years.

The Quartet also wants all settlement construction stopped even including natural growth and they want Israel to dismantle all buildings that have erected since March of 2001. 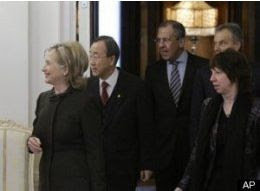 When the Gentile nations of the world start telling the Jewish state of Israel how to live in their capital city of Jerusalem, you can know that the Messiah is about to come back to the earth - that is according to Bible prophecy.

In the Middle East Quartet meeting held in Moscow, Russia, the Gentile world leaders joined together to pressure the Jewish state of Israel to stop all construction in Jerusalem and across Judea and Samaria. The Quartet, made up of the United States, the European Union, United Nations and Russia, believe that they know how to bring peace to the Middle East and it is to pressure Israel to make concessions that could lead to the end of a Jewish state.

From my vantage point, I find it difficult to see how world leaders can dictate how the Jewish people may live in their own ancient homeland to which they have returned. It is especially hard to understand how any world leaders can tell the Jewish state how to live in their own capital city. I say it is hard and then I recall the words of Jesus Christ, the words that He said to Jewish people some 2000 years ago during His Olivet Discourse. This profound prophecy conference where the speaker was Jesus Christ, the master teacher and prophet, told those attending that the city of Jerusalem would be trodden down of the Gentiles until the Times of the Gentiles be fulfilled. That statement made by Jesus found in Luke 21:24. The Times of the Gentiles are the times in history when Gentile world leaders dictate what the Jews do in Jerusalem. This time in history surely qualifies for this prophetic statement.

The Quartet telling Israel, the Jews, how and what they can do in Jerusalem is indeed Bible prophecy being fulfilled.
FTKNY6BE3AYH

Clinton: Decision to escalate row with Israel 'is paying off' - Ha'aretz

Times Of The Gentiles Vs. The Church Age - GraceThruFaith.com (Jack Kelley)