The Lord of Life

Commandment number six of the Ten Commandments says: "You must not kill" (Exodus 20:13).

A more accurate translation of Exodus 20:13 would read, "You shall not commit murder." This commandment obviously forbids the taking of another human life for no justifiable reason.

I can't go into depth here in this column, but suffice it to say that the Bible does not condemn all killing. Numbers 35 plainly states the difference God sets between killing and murder. All murder, of course, is killing, but not all killing is necessarily murder. There are times when death is permissible (though not desirable). Self-defense is one example. If someone were to break into your house with the intent of killing you or your family, Scripture allows you to defend yourself.

When our military or law enforcement officers strike at terrorists who have attacked our nation, that is justifiable killing. It is not murder; it is self-defense.

Some pacifists will say, "When we kill terrorists we're just as bad as they are, because all killing is sin." This is called the "moral equivalency" approach. I would respond with this question: Was it wrong to use force to stop the Nazis from destroying the Jews? No, it was a just use of force to save innocent lives.

God has established order and laws by which a culture ought to be governed. There will always be those who break those laws, and there must be repercussions.

In Romans 13, the apostle declares that God Himself has raised up the military and the police to do His work.

What does the Bible mean when it says, "You shall not murder"? The Hebrew term means "to dash in pieces." It is never used to describe the death of an animal, an opponent in war or capital punishment.

Speaking of capital punishment, it was established by God Himself, many years before the Ten Commandments. Way back in the early chapters of the book of Genesis, God said: "Murder is forbidden … any person who murders must be killed. Yes, you must execute anyone who murders another person, for to kill a person is to kill a living being made in God's image" (Genesis 9:5, 6 NLT).

The Bible consistently views capital punishment as "justice," not "murder." It is seen as a deterrent to others committing such crimes of violence, and thus, a protector of life.

Some would have difficulty understanding why Christians with a biblical worldview would condone the execution of a murderer, and yet oppose abortion. To me, the opposite view is much more illogical and difficult to understand: How some people will oppose capital punishment and yet support abortion!

When it comes to the topic of abortion, deliberately taking the life of a pre-born baby, there can be no debate. If you believe the Word of God, you can draw no other conclusion than this: Life begins at conception. 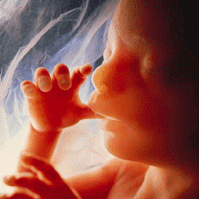 Listen to David's words to God as he spoke about being in the womb:

You made all the delicate, inner parts of my body
and knit me together in my mother's womb.
Thank you for making me so wonderfully complex!
Your workmanship is marvelous – and how well I know it.
You watched me as I was being formed in utter seclusion,
as I was woven together in the dark of the womb.
You saw me before I was born.
Every day of my life was recorded in your book.
Every moment was laid out
before a single day had passed.
(Psalm 139:13-16 NLT)

In Jeremiah 1:5, the Bible again shows that God has a plan for each of us, before our birth. God declares: "I knew you before I formed you in your mother's womb. Before you were born I set you apart and appointed you as my spokesman to the world."

Notice that God says, "I formed you in your mother's womb." Each child, then, is created by God and should be given the chance to live. God does not say, "I waited until you were born to have a plan for you, because you weren't a viable human being yet, but only a mass of tissue."

Max Lucado puts it like this: "You were deliberately planned, specially gifted, and lovingly positioned on this earth by the Master Craftsman."

I myself was conceived out of wedlock, but thankfully carried to term. God had a plan for my life! And God has a plan for every baby conceived in our world, regardless of the circumstances surrounding that conception. There is no such thing as illegitimate children.

And yet, abortions are so commonplace in our culture. Since the passing of Roe vs. Wade in the early 1970s, 50 million babies have been aborted. Across America, a baby is aborted every 15 seconds, and abortion has mushroomed into a $500 million-a-year industry in the United States, and an estimated $10 billion industry worldwide.

Here is what we hardly ever hear about: There are serious repercussions for women who have had abortions. These women experience a much higher degree of depression and attempt suicide at far higher rates than those who have never gone through the procedure.

I have counseled girls who have made that tragic choice, and it can haunt them for the rest of their lives. As they look at other children, they mark the years their child would be if he or she had lived. The full impact of what they have done often doesn't sink in until much later.

Abortion is not an answer. It leaves one dead and one wounded.

As difficult as that may be, at least that little boy or girl will be given a chance at life.

I challenge any pregnant woman to have a sonogram! Ninety percent of mothers who have had a sonogram decide against abortion.

Someone will ask, "But what if the mother's life is in danger?"

I would still say, "Carry the baby to term." What mother wouldn't sacrifice her life for her child if it ran in front of a car? The fact is there is still a good chance the mother will survive the birth anyway. To me, that is an acceptable risk.

If you have had an abortion and are feeling condemned by this discussion, I would point you to two wonderful passages in God's Word.

No matter what we have done in our lives, if we turn from our sins and cry out to God for forgiveness, He will forgive us, mend the brokenness in our lives and even turn our sorrow into joy.

That's just what you would expect from the Lord of Life.

What does the Bible say about abortion? - GotQuestions.org