Netanyahu Stood His Ground with Obama

What in the world was going on behind the scenes of the Obama-Netanyahu meetings? Why were the talks so tense, and so shrouded in secrecy? Wednesday night, I was able to gain some clues. It’s not good.

The Obama administration has been applying intense and unprecedented pressure on the Netanyahu government to make huge unilateral concessions to the Palestinians even before direct peace talks begin. One advisor who has been briefed on the talks told me:

“President Obama is insisting that Israel sign a document that specifies Israel’s commitment to a peace deal with the Palestinians that will be based on 1967 lines. This means no building in Jerusalem, and a time table to address other core issues, like the ‘right of return.’”

The source, one that I trust a great deal, also noted that President Obama spoke by phone in the last 24 hours with German Chancellor Angela Merkel, French President Nicolas Sarkozy, and British Prime Minister Gordon Brown to make sure each of them are on board with pressuring the Israelis to make such unprecedented unilateral concessions. The White House apparently wants the document to become the blueprint for final status negotiations, even though the Palestinians refuse even to come to the table and sit down face-to-face with Israeli leaders, including Netanyahu. 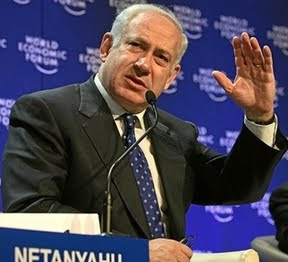 The good news: Netanyahu had a very good week. He looked strong and principled. He was gracious and diplomatic. And he stood his ground. He did not cave in to the intense pressure from the White House and State Department. He refused to divide Jerusalem. In a masterful AIPAC speech, he calmly and clearly explained why Israel would never give up the right to build homes in her capital. He sent the U.S. and the world a straightforward and sobering message that if they don’t move quickly and decisively to stop Iran from getting the Bomb, then Israel will do it herself. He didn’t threaten. He didn’t swagger. He simply stated the facts, in their historic context, and nobody does it better than Netanyahu. What’s more, he did all this with Defense Minister Ehud Barak standing in solidarity at his side, which was important because it sent the White House — and his critics back in Israel, and enemies back in Iran — the message that the Israeli government is united. No small thing. Barak came to Camp David with Yasser Arafat in 2000 willing carve up Jerusalem and give away the West Bank. God bless Netanyahu for opposing this approach in principle, and for having and (thus far, at least) maintaining Barak’s support in the process.

What’s more, the AIPAC speech, plus the warm and engaging meetings with Members of Congress significantly strengthened Netanyahu’s hand. It reconnected him in a very important way with grassroots pro-Israel activists from all over the U.S., Jews and Christians alike. It also significantly strengthened his alliance with Congress, which continues to prove itself as the pro-Israel end of Pennsylvania Avenue. Both are critical in counter-balancing the hostile Obama administration.

The President and Prime Minister met twice at the White House on Tuesday night for a total of about two hours, from 5:30pm to around 7pm, and then again from about 8:30pm to 9pm. Senior aides to both leaders then stayed up until nearly 1:00am Wednesday morning continuing their talks. The White House, however, has refused to treat Netanyahu and Israeli Defense Minister Ehud Barak with the dignity and respect afforded other world leaders. No joint press conferences. No photo ops. No still shots released of the two leaders meeting. Pretty much ”no comment” to any of the substance.

The Netanyahu team, apparently following the request of the White House and trying to be sensitive to the desire of its host, hasn’t been talking either. On Wednesday morning, the Israelis canceled all interviews. Several news outlets have noted the silence related to the talks is “deafening,” and I agree. It’s hard to remember the last time a world leader of Netanyahu’s caliber — particularly a strong friend and ally of the United States — was subject to such treatment from an administration that claims to be hitting the “reset” button to improve relations between the two countries. Except for last year when Netanyahu came to Washington and also met with Obama without a photo op, press conference, or any of the diplomatic trappings of mutual respect and true friendship.

I believe that Netanyahu was wise to cancel his media interviews on Wednesday. He didn’t grandstand. He didn’t purposefully stick his finger in the President’s eye. Having effectively made his public case to AIPAC and Congress on Monday and Tuesday, Netanyahu, Barak and their team worked hard on Wednesday to show the administration their willingness to negotiate in good faith, and to do so without immediately and publicly airing their differences with the administration. That said, Netanyahu and his team should soon do many media interviews with U.S. and foreign media. He should also dispatch senior government officials to speak to Jewish and Christians groups throughout the U.S. in the weeks and months ahead. He has the support of the American people, but he should never take that for granted.

The central problem is the White House and State Department are trying to force Israel to divide Jerusalem and divide Judea & Samaria, commonly known as the West Bank. This is a mistake for numerous reasons, particularly because of Joel 3:1 in which the Lord says in the last days He will “enter into judgment” with “all the nations” because they have terribly mistreated the Jewish people “and they have divided up My land.”

Prophetically, I believe Israel will eventually be isolated from all countries in the world, especially as we approach the fulfillment of Ezekiel 38 & 39. Eventually, the Lord will wean Israel off of every nation – including the U.S. – so that the Jewish people only have Him to turn to and depend upon. That said, however, the Scriptures are clear in Genesis 12:1-3 and elsewhere that those who bless Israel, He will bless, and those who curse Israel, He will curse. We want our countries to be blessed by God, to experience repentance and revival and to be blessings to the rest of the world. Now, therefore, is the most critical time for true followers of Jesus Christ to show unconditional love and unwavering support to Israelis and to their Palestinian neighbors. We need to pray for the peace of Jerusalem. We need to show the love of Jesus to every Jew and Gentile in the Holy Land. And we need to strengthen the Church in the epicenter, encourage pastors and ministry leaders, and help them fulfill Isaiah 60:1-4.

In light of all that is happening, please prayerfully considering coming to the 2010 Epicenter Conference in Philadelphia this June 25-26. This event will provide the most practical training for pastors, ministry leaders and lay people in how to “learn, pray, give and go” that we have ever sought to accomplish in previous conferences. I believe it is very timely, especially with the theme the Lord has given us – “Building a Global Movement of Christians to Bless Israel, Come What May.” To learn more about attending the conference, register, and/or how to sign up to show a webcast of the conference to your congregation, please go to http://www.epicenterconference.com/ and click on the top section called “webcast.”

The God of Israel neither sleeps, nor slumbers. He is in charge. He is watching over His people to protect them. But He calls on us to pray for the peace of Jerusalem, to educate Christians around the world about God’s love and plan for Israelis and Palestinians, and to care for both sides in real and practical ways, including food, clothing, medical supplies, and other forms of humanitarian aid. This is what The Joshua Fund is trying to do. We’re so grateful for your prayers and financial support. This is a critical moment for followers of Jesus Christ. May we be faithful to the Lord until He returns.

Netanyahu Can Say "No" - IMRA