Its Time to End the Federal Reserve

Last week, the Federal Reserve was ordered to disclose documents that specifically identify financial institutions that might have collapsed without aid from the 2008 bailout program.

The order, issued by the U.S. Court of Appeals in Manhattan, marks a new development in the ongoing legal battle between Bloomberg and the Federal Reserve. This ruling upheld a previous order from August 2009 that ordered that the information be released.

This unusual legal struggle began on November 7, 2008 when Bloomberg filed a lawsuit under the Freedom of Information act against the Federal Reserve Board of Governors, demanding that the Fed release the names of private financial institutions that received public bailout money.

Of course, the Federal Reserve has long claimed that it is a transparent agency and that it has nothing to hide. However, when confronted with this request for information regarding the recipients of the financial aid, the Federal Reserve immediately recoiled and began making statements about how such disclosure would do “irreparable harm” to the financial institutions that needed the Fed’s emergency loans during the biggest government bailout in U.S. history.

As it became clear that the information would have to be released to the public, the Fed began issuing threats that revealing such information would endanger the entire economic order of the United States. Additionally, the Fed claimed that its functions should be vigilantly shielded from public and political scrutiny to avoid the institution from being rendered impotent in its monetary policy efforts. 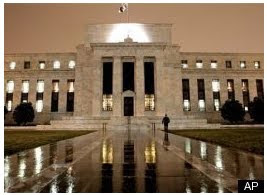 While there may be some validity that politicizing monetary policies may not be a positive development, the Federal Reserve appears to be forgetting one very important point. The money that they print and secretly hand out to whomever they deem worthy is not theirs. It belongs to the people. This money is the people’s money. And the money that the Federal Reserve lends out must be paid back, not by the Fed, but rather by the American people. With the recent bailout, the Federal Reserve has printed and handed out nearly $2 trillion of U.S. currency to unknown entities. And the bill for these loans has been sent to the American people – plus interest – to be made payable to the Federal Reserve. For an organization that is dedicated to “transparency” the decision should be clear. Hand over the documents and allow those who have to pay the bill know who they are paying the bill to. If the reputations of those financial institutions suffer as a result, that is unfortunate. But what is even more unfortunate is that the American people – and their unborn – are now on the proverbial hook for trillions of dollars to financial institutions that should have been allowed to fail due to their excesses through the natural forces of the free-market.

The tragedy lies herein. Our Federal government took a dangerous turn when its first priority became – not protecting the American people from future crisis – but instead to prevent any crisis at all. Bush summed up the Federal government’s problem well when he stated during at December 2008 interview that he had “abandoned free-market principles to save the free-market system.”

The Federal government’s current fixation on preventing any financial pain will instead lead to more economic complexities in the future. The Federal Reserve’s lack of transparency, and further insistence upon protecting the identities of the financial institutions who needed emergency loans, is further proof of the intention at the Federal level to maintain the illusion of prosperity regarding America’s fiscal house of cards.

“You are a den of vipers and thieves. I intend to rout you out, and by the grace of the Eternal God, I will rout you out.”

Political conviction and backbone of this sort is mocked today by the historically uninformed.