In an unusual pair of low profile, closed door meetings at the White House, the Israeli Prime Minister Netanyahu and US President Obama met to discuss the relationship between the two countries with both sides holding different opinions on how to proceed with the Middle East peace process.

President Obama wants Israel to stop all building in not only the Jewish settlements in Judea and Samaria but in the Eastern section of Jerusalem as well to which the Israeli PM has repeatedly said that Jerusalem is not a settlement, it is the capital of the Jewish state of Israel. 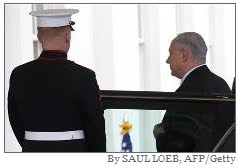 A meeting at the White House between the US President and the Israeli PM discussing the future of the Jewish state is evidence that Bible prophecy is moving closer to fulfillment.

It is rare when two heads of state, especially very close allies, meet at the White House in what has been termed a 'closed door session' between the US president and the Israeli PM. Netanyahu, in a speech before his White House meeting, stated that 3000 years ago, King David was building in Jerusalem and that Jewish people today are going to continue to build in Jerusalem. The Israeli PM also told US leaders that Jerusalem is not a settlement, it is the capital city of the state of Israel.

This report is evidence of how human government is being used today to set the stage for the end of time scenario that will be played out especially in the Jewish state of Israel. God has used human government down through history to deal with the Jewish people. II Chronicles 36 records how the Babylonian King Nebuchadnezzar was used to take the Jewish people out of their land. Ezra 1 reveals how Cyrus, the Persian king, was used to allow the Jewish people to return to Jerusalem and rebuild their Temple. The Roman General Titus and his mighty army destroyed the Temple, devastated the city of Jerusalem, and dispersed the Jews to the four corners of the earth as Jesus Christ had said it would happen, Matthew 24 and Luke 21. Revelation 17:17 says that God will use human world leaders to fulfill His end time prophecies as well.

The White House meeting between Obama and Netanyahu is indeed evidence that Bible prophecy will be fulfilled.
FTKNY6BE3AYH

Why Barack Obama Manufactured This Crisis With Israel - RedState