The pro-life House Democrats capitulated on Sunday night and joined on a party line vote to pass the health care bill, to the dismay of large numbers of American voters. Any compassionate person wants to make sure that all people, whether rich or poor, can get help when they are ill or injured. However, this step deeper into the arms of socialism may have unintended consequences that leave us worse off than before. 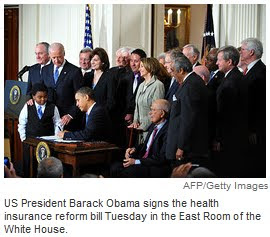 The US House voted to pass the Senate version of the health care bill on Sunday night by a 219-212 vote. Every Republican and 34 Democrats voted against it. President Obama cheerfully signed the bill into law on Tuesday, pleased to be ensuring health insurance for 32 million additional Americans, widening the social safety net to offer nearly universal medical coverage.

Heart wrenching stories abound about people who have been swamped in medical bills, unable to make their payments, or worse yet, who have been refused medical care because they lack insurance. Rising medical costs make getting sick a serious financial issue. The government hopes that this sweeping new legislation will fix some major problems. Yet, many Americans believe the nation's health care troubles could be addressed without resorting to massive government spending and intrusion into American lives and businesses.

"We have now just enshrined the core principle that everybody should have some basic security when it comes to their health," the president said at the bill’s signing on Tuesday.

What Will It Do?

Effective right away, insurance companies will no longer be allowed to deny coverage to children with pre-existing medical conditions and by 2014 insurance companies will be required to insure anybody with pre-existing conditions. Starting this year, insurance companies will not be allowed to put lifetime caps on the amount of coverage any family receives and will be required to allow parents to keep their children on their insurance until the kids reach 26-years-old. By 2014, Americans will be required to carry health insurance either privately or through their employer or through a government program. Also by 2014, those who make less than 400 percent of the poverty level (about $43,000) will be able to receive Medicaid and federal subsidies to help pay for insurance premiums through a health insurance exchange program. People who fail to get some form of coverage and employers who fail to cover their employees will be fined. The legislation does not provide for a "public option."

Who Will Pay for It?

Individuals who make more than $200,000 per year and couples filing jointly who make over $250,000 will find their taxes on capital gains, dividends, interest, rents and royalties notched up several percentage points, along with an increase in their contributions to Medicare.

Roberton Williams, an economist at the Tax Policy Center noted, "It’s very clear that taxes are levied on the wealthy and the benefits will spread across the entire income distribution, with a lot going to expanded Medicaid distribution and expanding health insurance. One couldn’t claim [Obama] didn’t keep that promise" to "spread the wealth around."

In the next few weeks, Congress will work to pass the reconciliation bill that House Democrats are pushing, one that will add $100 billion more in spending and delay the tax on "Cadillac" health plans.

If some millionaires aren’t bothered by their new burden, plenty of other people are upset by the legislation. Attorneys general from 14 states filed suit minutes after the President signed the bill, arguing that the Federal Government was overstepping its constitutional bounds. Florida Attorney General Bill McCollum contends that the bill violates the Constitution’s commerce clause by forcing Americans to buy health insurance.

"It forces people to do something - in the sense of buying a health care policy or paying a penalty, a tax or a fine - that simply the constitution does not allow Congress to do," McCollum said at a news conference in Tallahassee.

Pro Life groups also believe the bill will open the door for federal funding of abortions. The pro-life Democrats in the House were the last major wall against the bill, but Rep. Bart Stupak, D-Mich., leader of this pro-life bloc, agreed to support the bill after President Obama issued an executive order to maintain all prohibitions against taxes paying for abortions. However, organizations like The National Right to Life Committee argue that the bill is "riddled with provisions that predictably will result in federal subsidies for private insurance plans that cover abortion" and that the executive order will have no real effect. In a statement, the NRLC said, "The executive order promised by President Obama was issued for political effect. It changes nothing. It does not correct any of the serious pro-abortion provisions in the bill. The president cannot amend a bill by issuing an order, and the federal courts will enforce what the law says."

While the health care legislation makes it possible for more people to get on Medicaid, there is concern that there won't be enough doctors to take on the number of patients out there. Christopher Conover, director of the Health Policy Scholars Program at Duke, commented on the health bill, saying, "We already have a primary care system that's pretty overburdened; now we're adding tens of millions to the Medicare rolls and not significantly expanded the capacity of the system to absorb them. I think that's going to create real problems. Everyone is going to feel the impact of adding so many more people to the system without fundamentally altering the supply side, the number of providers."

People with insurance tend to go to the doctor more often, which is beneficial since problems are caught in their early stages rather than later on when treatment might be more difficult and costly. However, adding millions of people to doctors' waiting rooms means the wait time for an appointment will be that much longer. There is already a shortage of physicians, and especially those willing to accept Medicaid patients. Having either private insurance or Medicaid may not guarantee that an ill person will get to see a doctor when needed.

Businesses are also concerned about what the costs of insuring their employees will mean, even with tax breaks for small companies of 25 people or less. Larry Keller, CEO of the Asheville-based company Visual Intelligence & Analysis said, "My business – I have no intention of adding people and will use 1099 contract folks to do my work. I had envisioned becoming a real corporation one day employing people with excellent compensation and benefits but there is no way I would consider that now."

Americans have had a wide variety of responses to the health care legislation, with progressives arguing that it does not go nearly far enough and conservatives regretting the deeper plunge into socialism. Some are upset that it slashes Medicare, and others that it raises taxes and will be very expensive in the long run. One CNN reader commented sarcastically, "This is cool. I'm just going to drop my insurance now, pay the $700 yearly fine, and then pickup insurance when I get sick since insurance companies can't deny me. I'll save a bundle of money every year."

Does the Bible support Communism/Socialism? - GotQuestions.org