Up to as many as 19 million Iraqi citizens will have voted when the national elections have been completed and may well determine the direction of Iraq as it endeavors to rebuild after the many years of wars across this Arab nation who wants to be free of any dictator and to build a democratic nation in the midst of the Islamic world. There are reports of how terrorist attacks at polling places and threats to potential Iraqi voters kept them from exercising the freedom to vote for the leadership and the direction of the future Iraqi society and government.

Meanwhile, the Shiites, who make up about 60% of the total body politic of Iraq, held prayer meetings which turned into election rallies in order to make sure that they maintained their strong Moslem influence in the next Iraqi government and the way of the future for their nation. 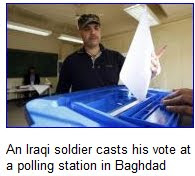 The Iraqi people voting in their national elections may have influenced their present situation but their future has already been determined that is according to Bible prophecy.

The world has watched as the Iraqi people held their elections to elect the leaders to govern today and to rebuild their war torn nation. Religion has played and will play a key role in the future of Iraq as it has each election including this one as well. The nation of Iraq is divided into three parts: the Kurds in the oil-rich north, the Shiites in the south, and the Sunni element of Islam in the center part of the state. These three elements of the body politic of Iraq must come together for Iraq to have a stable future today and tomorrow.

However, Bible prophecy is basically a prewritten history of what will happen in this region of the world. The nation of Iraq is the modern-day name for Biblical Babylon and the Bible says much about this geographical location. Revelation 18 reveals that Iraq, Biblical Babylon, will come to power as the economic capitol of the world under the leadership of the Antichrist the soon coming world dictator. This leadership comes to an end in 3 1/2 years and Babylon, modern-day Iraq, is destroyed (Isaiah 13-14, Jeremiah 50-51, and Revelation 16:17 and following).

The Iraqi elections only set the stage for what will happen according to Bible prophecy that will be fulfilled.