Ark of the Covenant: Present Location

In the previous installment of this "Ark of the Covenant" series, we looked at the Ark's history in the Bible. Today, we'll look at the main theories as to where the Ark is today.

No one knows for sure what happened to the Ark. The last time it is mentioned in Scripture is in 2 Chronicles 35:3. That passage makes it clear that the Ark was still in existence at the time of the spiritual revival led by the boy king, Josiah. Within 22 years after Josiah died, Judah fell to the Babylonians (586 B.C.), and the Ark disappeared.

The majority of scholars believe it was simply destroyed when the Temple was burned. Others believe it was captured as a prize of war, taken to Babylon, and probably melted down for its gold. But many believe it survived and is hidden somewhere today.

Those who believe the Ark was lost when the Babylonians conquered Jerusalem and destroyed the Temple point to 2 Kings 24:13 and the parallel passage in 2 Chronicles 36:18. Both assert that "all the articles of the house of God, great and small, and the treasures of the house of the Lord" were taken to Babylon. But the Jewish sages have always argued that King Solomon anticipated attacks on Jerusalem and the Temple and that he therefore constructed a vault for the Ark that was located deep within the Temple Mount and protected by mazes and false passageways. [1] Further, they point out that when the Jews were released from Babylonian captivity by Cyrus, the Ark is not mentioned in the list of Temple treasures that were given to those who were returning to Jerusalem (Ezra 1:5-11).

The idea of a secret vault beneath the Temple Mount is certainly plausible. Furthermore, the existence of such a hiding place is implied in 2 Chronicles 35 where we are told that King Josiah ordered the Levitical priests to restore the Ark to the Temple. It had evidently been removed during the reign of the evil King Manasseh who desecrated the Temple with altars devoted to foreign gods (2 Chronicles 33:1-5).

Further evidence that the Ark may have been destroyed by the Babylonians is the fact that the Ark was never restored to the Holy of Holies when the Second Temple was built after the return of the Jews from Babylonian captivity. Each year at Yom Kippur when the High Priest entered the Holy of Holies, he would sprinkle the blood on a portion of bedrock that protruded from the floor — supposedly the rock on which the Ark had traditionally rested. This rock was called "the foundation stone." [2] The fact that the Holy of Holies remained barren of the Ark is attested to by the Roman historian, Tacitus. He states that when the Roman general, Pompey, conquered Judah in 63 BC, he entered the Holy of Holies and found it completely empty. [3]

The Jewish sages counter-argue that the reason the Ark was never restored to the Holy of Holies in the Second Temple is because the Jews were never independent after they returned to their land. First they were under Persian control, and then they were conquered by the Romans. They maintain that because of this foreign domination, the Ark was left in its hiding place during the Second Temple period (516 BC to 70 AD).

As indicated above, the Jewish tradition is that the Ark was placed in an underground vault at the time of the Babylonian siege of Jerusalem, and it remains there to this day. This tradition is affirmed by several passages in the Talmud. The Jewish sages also believe that entombed with the Ark are other Temple treasures such as the Tabernacle of Moses (the tent temple used during the wilderness wanderings and the period of the Judges), the incense altar, Aaron's rod, the pot of manna, and the tablets of Moses. [4]

In 1967 during the Six Day War the Jews regained control of the Old City of Jerusalem for the first time in modern history. Hopes soared among many of the Orthodox Jews that this momentous event would give them the opportunity to explore underneath the Temple Mount to find the vault containing the Ark. However, General Moshe Dayan, acting on his own authority, decided almost immediately to surrender control of the Mount back to the Muslim authorities. He did this to prevent any attempt to destroy the Dome of the Rock. He also felt that such a gesture would indicate to the Arabs that the Israelis wanted to live in peace with them. Dayan was a secular Jew, and the Temple Mount meant little to him.

Ever since that time, Israel has had sovereignty over the Temple Mount, but has relinquished control of it to Muslim authorities. This has made it impossible for the Jews to conduct any archeological excavations on or under the Temple Mount. 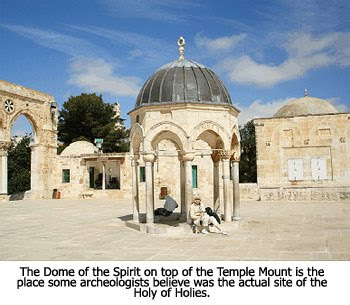 In 1981 some Jewish rabbis started clearing debris from an area next to the Wailing Wall area in order to set up a synagogue. In the process they discovered what is called Warren's Gate. It was a gate that had been discovered a century earlier by the British explorer Charles Warren during an underground probe, but had never been fully excavated. This was believed to be the gate that led to the area closest to the Holy of Holies. The gate was sealed, but the rabbis broke it open and started tunneling under the Temple Mount toward the area that would be beneath the Holy of Holies. But before they could get very far, they were discovered by the Muslim authorities and were forced to stop.

The current Jewish Rabbinate takes the position that the Ark is definitely located in a vault under the Temple Mount but they have ruled that no Jew can enter the vault until the Messiah appears and reveals the exact location of the Holy of Holies. [5]

One of Christendom's foremost authorities on the Ark is Randall Price, a Bible prophecy expert and a professor of Judaic Studies at Liberty University in Lynchburg, Virginia. He has concluded that the Ark is still in existence and is located under the Temple Mount. [6]

One of the oldest and strongest traditions regarding the fate of the Ark is one that is found in the apocryphal book of 2 Maccabees which was written during the inter-Testamental period. It contends that Jeremiah fled Jerusalem with the Ark and buried it in a cave in Mount Nebo which is located in the modern day nation of Jordan.

The narrative in that book says:

"...the prophet, warned by an oracle, gave orders for the tabernacle and the ark to go with him when he set out for the mountain which Moses had climbed to survey God's heritage. On his arrival, Jeremiah found a cave-dwelling, into which he brought the tabernacle, the ark, and the altar of incense, afterwards blocking up the entrance" (2 Maccabees 2:4-5).

The two books of Maccabees are not part of the accepted biblical cannon and are therefore not considered to be inspired of God. The story about Jeremiah could be true, or it could simply be a legend.

There are some people who believe the Ark of the Covenant is in the Vatican. They base this belief on the fact that the arch that was built in Rome to honor Titus's victory over the Jews contains a frieze that shows Jewish captives carrying a large menorah, which is a seven-branched candelabrum. 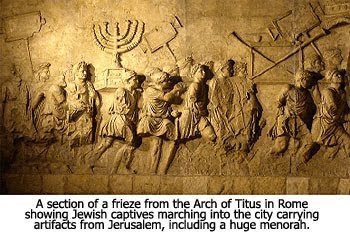 Many assume the menorah is the one from the Temple, but that is unlikely for several reasons. First, its base is octagonal in shape with graven images. The Temple menorah is always described in Jewish literature as having a three-legged or triangular base. And no item in the Temple would have had any graven images on it. That would have been considered gross idolatry. Also, the Temple menorah was made of solid gold and would thus have been too heavy for one or two persons to carry it on their shoulders, as the frieze depicts.

There has been a rumor for many years that the Ark of the Covenant is in the Saint Mary of Zion Church in Axum, Ethiopia. In recent years this idea has been popularized in the writings of Grant Jeffrey, a Canadian Bible prophecy writer. 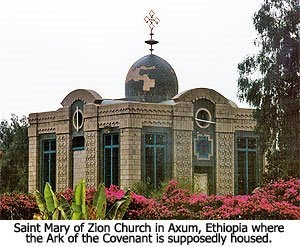 This rumor is based on a bizarre story that the Ark was smuggled out of Jerusalem by Menelik I, the supposed son of a union between the Queen of Sheba and King Solomon. Supposedly, a replica of the Ark was left in the Holy of Holies in the temple in Jerusalem. The motivation for moving the Ark was to protect it from King Manasseh, one of the most ungodly kings in the history of Judah. [7]

There are all kinds of problems with this legend. For one thing, it is doubtful that the Queen of Sheba ruled over Ethiopia. It is more likely that her realm was modern day Yemen.

Regarding Menelik I, he ruled over Ethiopia around 950 BC, according to tradition. Manasseh did not become king of Judah until 253 years later. Therefore, Menelik's supposed removal of the Ark from Jerusalem could not have had anything to do with trying to protect it from King Manasseh.

Harry Atkins, an Ethiopian historian, contends that there is no record of this legend in Ethiopian history until the end of the 13th Century. At that time there was a dispute over who should be king, and one of the contenders claimed to be a descendant of King Solomon and the Queen of Sheba. Atkins says it was at that point that the legend of the Ark entered into Ethiopian history. [8]

Another theory regarding the fate of the Ark is that it was translated or raptured, being taken up to Heaven to prevent it from falling into the hands of the Babylonians. This theory is based upon a reference to the Ark in Revelation 11:19. This passage is a flash-forward to the end of the Tribulation when Heaven opens and Jesus returns in wrath. The writer states that when Heaven opened "the ark of His covenant appeared in His temple."

Those who reject this theory argue that the Ark seen in Heaven in this passage is the heavenly reality of which the Ark of the Covenant was only an earthly shadow or copy (Hebrews 8:5).

In the last installment of this series on the Ark of the Covenant, we'll look at what future the Ark has, if any.