At the rate the Obama Administration is going, it may rival the Nixon Administration in its cover-ups and dishonesty. The new revelation that at least nine attorneys in the Justice Department have previously defended accused jihad terrorist follows closely after another incident remarkably similar in broad outline: the Rashad Hussain debacle. Both feature the Obama Administration apparently turning a blind eye to sympathy for jihad terrorists, followed by clumsy attempts to cover up its indifference once the whole thing came to light.

Rashad Hussain is the young man Obama appointed as special envoy to the 56-nation Organization of the Islamic Conference, only to discover that several years ago Hussain decried as a “persecution” the prosecution of admitted Palestinian Islamic Jihad leader Sami al-Arian. This was disturbing enough in itself, but less so than the clumsy cover-up that followed, in which Hussain attempted to whitewash the record of his statements about al-Arian by having the magazine in which they appeared alter its online archive. Did the White House know Hussain was doing this? Did it approve of his action? We don’t know, because Obama’s ever-helpful lapdog, the mainstream media, is not asking.

Now comes the latest indication that the Obama Administration’s commitment to doing something effective about the recent increase in jihad terrorist activity in the U.S. is sadly lacking. In the wake of the Fort Hood massacre, the Christmas day underwear bomber, and several other foiled jihad terror attacks on American soil, it has now come to light that at least nine former advocates for accused jihad terrorists are working in the Justice Department to prosecute those same terrorists and their comrades-in-arms. 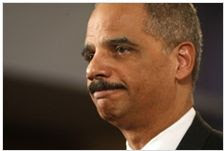 And contrary - yet again - to Obama’s campaign promise of transparency, the Holder Justice Department so far has released the names of only three of them. These include Tony West, the Assistant Attorney General for the Civil Division, who once defended the Marin County Mujahid, American Taliban John Walker Lindh, a convert to Islam who was captured in Afghanistan in 2002, fighting alongside the Taliban and Al-Qaeda against American troops; and Neal Katyal, Principal Deputy Solicitor General, who defended Osama bin Laden’s driver, Salim Ahmed Hamdan. If Holder thinks that he can safely reveal that the Justice Department is now the place of employ for the defenders of one of the foremost American jihadists and one of Osama bin Laden’s personal lieutenants, what is he concealing?

The whole problem smacks of what Senate Minority Leader Mitch McConnell (R-Ky) calls the “ACLU mentality” toward terrorists that pervades the Obama administration.

One wonders just how committed these nine legal eagles will be to prosecuting people from the same group as those whom they were so recently defending.

Would the Justice Department under Franklin Delano Roosevelt in 1942 have hired lawyers who defended Nazis? Would Holder’s Justice Department have hired Lynne Stewart, the lawyer who defended the mastermind of the 1993 World Trade Center bombing, the Blind Sheikh, Omar Abdel Rahman, before she was sent to prison for helping the Blind Sheikh pass messages to his fellow jihadists outside the prison walls? Do Obama and Holder really not see that the nine lawyers may be looking out for the defense of their former clients and their jihadist coreligionists, rather than trying to make sure they are adequately prosecuted? Or do they just not care?

In a letter to Holder last Friday, the seven Republican members of the Senate Judiciary Committee complained that when they inquired about these attorneys, the Justice Department’s response was “at best nonresponsive and, at worst, intentionally evasive.”

Why the cover-up? Now in both the Rashad Hussain incident and the strange half-admissions about the Justice Department, the Obama Administration has once again reinforced the impression that it is more interested in winning brownie points in the Islamic world by apologizing for jihad terrorism and treating jihadists with kid gloves than it is in protecting the American people from those jihadists. We deserve better.