So here we go again - what is it? Round two? Reuters is reporting that a dozen or so House Democrats are willing to kill the socialist health care bill because of its taxpayer funded abortion provisions. Democrat Bart Stupak told ABC's Good Morning America, "Let's face it. I want to see health care. But we're not going to bypass the principles of belief that we feel strongly about." So he says that when the final bill comes down, and if it contains language providing for tax funded abortions, Stupak will lead some pro-life Democrats against it. While the motive is honorable, the entire concept borders on the ridiculous. 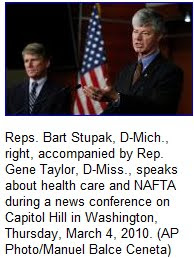 Stupak, the recent darling of the pro-life and Christian circles for his pluck against abortion, says he is not going to bypass the principles of belief that he feels strongly about. So where have these guys been when federal funding of Planned Parenthood to the tune of nearly a billion dollars a year is before the House? Just enabling Planned Parenthood federal funding for whatever the ostensible purpose is tantamount to taxpayer funded abortion. Why isn't the budget process stopped every year until the money for Planned Parenthood is lined out? Where are these pro life Democrats when that debate is going on? Moreover, why aren't these knights in life's armor stopping all of government until abortion is banned?

They are grandstanding here in the largest debate of the century where government is proposing to unconstitutionally take over a huge sector of the American economy, and they support that, but are against abortion money in the takeover. I know that folks out there are going to be all fired up about this stand - how gallant and honorable they are to stand on life principles. But what of the principles of the Constitution itself? The Declaration of Independence guarantees our inalienable rights to Life, Liberty and the pursuit of happiness. What is the price of fighting against abortion funding while ultimately passing a bill that will unconstitutionally undermine our ability to live healthy and free?

Fighting against abortion is honorable and right. Scuttling abortion funding, however, is likely a rope a dope way to nationalize America's entire health care industry. These socialists will find many other ways to fund Planned Parenthood and abortion. Stupak getting what he wants will clear the way for the bill to be passed. And that's what the socialists want more than anything.

Ecclesiastes 9:12 says, "...as the fishes that are taken in an evil net, and as the birds that are caught in the snare; so are the sons of men snared in an evil time, when it falls suddenly upon them." This is a big snare set in evil times. Abortion funding is the bait. The bill should be killed on Constitutional principles, which would include abortion.

Brother Of Obamacare Holdout Gets Fed Judgeship - Right Side News

US Democrats would kill healthcare over abortion - Reuters