Prince Saud al-Faisal, the Foreign Minister of Saudi Arabia, a country considered one of the most conservative Moslem states, believes that his country is moving in the direction of a liberal society while Israel is moving into a more religiously oriented culture. The Saudi foreign minister said that his country is breaking away from the shackles of the past and what is happening in Israel is the opposite. The Jewish state has a more religiously determined politics and moving to a very extreme sense of nationhood which is coming to a boiling point.

The prince links the alleged religious radicalization in Israel with the difficulty to strike a peace agreement with the Palestinians and the Arab countries blaming the religious institutions in Israel for this hindrance to Middle East peace. 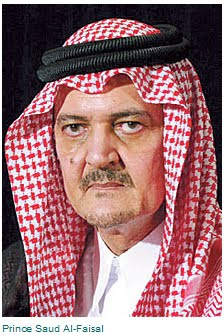 The statement from a leader of Saudi Arabia that Israel is becoming an extremely dangerous religious state is not only ironic but it has a prophetic significance as well according to Bible prophecy.

The ironic part of the statement by the Saudi Prince Faisal, the Foreign Minister of Saudi Arabia, is that his country is the birthplace of the Moslem religion and the most extreme element of Islam is the Wahhabi branch of Islam, the main component in the Moslem community in Saudi Arabia. Prince Saud al Faisal's statement that religion is becoming more a part of the body politic of Israel is pretty much on track. The orthodox Jews that make up about 30% of the population of the Jewish state have decided to become active in politics so that they can retain the land in Judea and Samaria that the Lord promised to them and then gave to them.

Meanwhile, the Moslem world is becoming more convinced that the Jewish state should not be in this world and Saudi Arabia, referred to as the Ishmaelites in Psalm 83:6 are part and parcel of the nations that will try to destroy Israel, that her name be forgotten forever (Psalm 83:4).

The Jewish state will become very religious when the Messiah Jesus Christ comes and the Jews become His people and He their God (Jeremiah 31:33). Bible prophecy will be fulfilled.