In my last column, I made a case for a biblical worldview, based on the watershed truth that there is a living God, and He has revealed Himself in Scripture.

With this in mind, we can ready ourselves to discuss some of the more controversial, "hot-button" issues in our culture today. 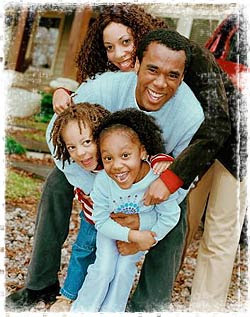 Isn't it interesting … before a word is spoken about how to treat others, God starts with the family.

Few things in life can give us as much pleasure – or pain! – as our families.

The fact is, God starts with the family because He created it. Our very existence as a society is contingent on the success of the family. And that also explains why Satan hates it so and has declared war on it. It has been said, "A family can survive without a nation, but a nation cannot survive without the family."

Respect for parents is certainly something we have lost sight of in our culture. In fact, this very lack of respect is one of the clear biblical signs that we are in the last days. Paul wrote of those days:

"For men will be lovers of themselves, lovers of money, boasters, proud, blasphemers, disobedient to parents …" (2 Timothy 3:2).

We tamper with God's order at our own peril!

There is a movement afoot to "redefine" marriage and family. Media and modern culture are pushing for same-sex marriage and the so-called normalization of homosexuality.

You will hear this most often defined as a mere political issue, but don't be misled. It is a moral issue and it is a biblical issue.

"But if two people are in love in a committed relationship, why shouldn't they marry?"

I could reply to that statement in a number of different ways, but here is what counts: Homosexuality is outside of God's order for life. He did not bring "Adam and Steve" together in the Garden, but Adam and Eve. His pattern is (and always will be) one man, one woman, married for life.

God is not "anti-gay," He is "anti-sin," no matter how it is expressed. He also loves all people, and wants them to come to repentance and into relationship with Himself.

I can hear someone say, "You are homophobic to say that!" But we could just as easily say, "You are bibliaphobic for denying this." (If you dare to speak out against any sin, you are branded something-phobic.)

Here is what God says about sin and sinners not entering His kingdom:

"Don't you know that those who do wrong will have no share in the Kingdom of God? Don't fool yourselves. Those who indulge in sexual sin, who are idol worshipers, adulterers, male prostitutes, homosexuals, thieves, greedy people, drunkards, abusers, and swindlers – none of these will have a share in the Kingdom of God" (1 Corinthians 6:9-10, NLT).

The Bible does not give an ambiguous statement on this topic. There is no confusion on this issue, unless your confusion is with the Bible itself. The apostle Paul in no uncertain terms establishes homosexuality as a sin in Romans 1:22-27.

Here is the heart of that passage:

That is why God abandoned them to their shameful desires. Even the women turned against the natural way to have sex and instead indulged in sex with each other. And the men, instead of having normal sexual relationships with women, burned with lust for each other. Men did shameful things with other men and, as a result, suffered within themselves the penalty they so richly deserved. (vv. 26-27)

How clear is that? It's very, very clear, and you can either accept it or reject it. But if you reject it, God already spells out the consequences in this first chapter of Romans.

God's order is for the family to be a man and woman, as husband and wife. And even though our culture seems to be doing all in its power to mock, denigrate, attack and deny the veracity of that basic relationship, God's truth stands. We must respect the institution of marriage and give it the honor it deserves.

How I thank God for the couples who have hung in there through life's ups and downs, who have stayed together and raised their children. Their commitments and their sacrifices will have an impact for generations to come.

The Hebrew word here for "honoring" your mom and dad comes from a verb that means "to be heavy, so that we give weight." In other words, give your parents the recognition they deserve for their God-given authority. Respect, esteem, value and prize fathers and mothers as gifts from God.

The fact is, as you get older, you get to see a lot of human drama played out in "real time." You not only see the choices people make when they're younger, but many of the consequences they reap from those decisions when they are older. You see what happens in the lives of people who disregard God's Word. You also see what happens in a culture when many people disregard those changeless truths.

By the same token, however, you also get to see what happens to those who have walked with God and obeyed His Word through the years, and the blessings that follow. That is not to say the Christian life is a "bed of roses." Far from it. Believers indeed suffer and experience tragedy, as my family and I know only too well.

Through it all, however, those who cling to God's Words and God's ways always experience God's faithfulness.

Clergy could face the law over same-sex ceremonies - WorldNetDaily.com

Is it possible to be a gay Christian? - GotQuestions.org