WARNING: There's No Power in This Blood!

Christianity Today online says that vampires are hot stuff right now even for Christians. Visit a Christian bookstore or publishing house Web site and you might be surprised how many vampire-themed books you will see. What's wrong with the picture? Legions of people will tell you that nothing is wrong. They are, in fact, trying to sanctify vampirism. 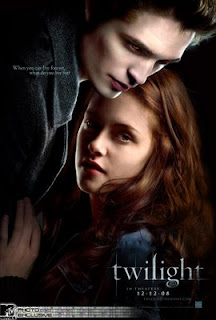 Stephanie Meyer's popular Twilight series is cashing in to be sure. Her four books which have sold over 17 million copies, and two movies thus far, are setting new records. To those of us who object, they will tell you that the theme of vampirism is just folklore. They aren't in the Bible. Relax.

But Web sites indicate some are obsessed, particularly with Twilight. Meyer, who is a Mormon, has connected with pre-teens and teens and is many steps beyond Harry Potter. And defenders of Potter had their mantra too: Come on, it's only fiction and it's getting kids to read. What parents and others won't admit is that these occult-laced child-sagas are also snaring some into dark practices.

So the recent Christianity Today review of this phenomenon titles their article, "There's Power in the Blood." As much as I dislike this magazine's Left-leaning views on many things, they have hit on a key here. The enemy is moving in on the most sacred issue to a true Christian - the saving shed blood of Jesus Christ.

In the article, University of Richmond English professor Elisabeth Rose Gruner notes that both Christianity and vampirism equate blood with life. She states, "Humans instinctively understand that blood is life-giving. But the blood-drinking aspect of vampirism is a 'ghastly parody of Christianity.' While the Christian believer attains eternal life by accepting the blood freely shed on his or her behalf, the vampire achieves immortality by sucking the life out of another."

So, in spite of what should be obvious, one Christian publishing house after another is turning away solid manuscripts for corrupted ones on this demented topic. What an example of Isaiah 5:20 with evil being called good here. This vampire fascination with blood is trying to rob the pure, atoning nature of Christ's blood.

Christianity Today talks to Allen Arnold of Thomas Nelson Publishers. He states, "Since the story of Christianity is one of redemption, Christian fiction should depict that redemption regardless of the subject matter. Rather than flee from a genre (like vampirism), we prefer to dive in and try to redeem it through a wholly original take." Translate that: Let's follow the money trail.

Friend and ministry colleague Eric Barger sums it up well in his article/brochure, "Bringing 'Twilight' Out Into the Son". "The storyline of Twilight is generally two-faceted. It is first 'boy vampire meets a mortal girl' and secondarily, 'good vampires' fight 'bad vampires.' "

If you think Christians would automatically reject this, I will share just one of dozens of e-mails I have gotten from "addicted" Christians. Melanie writes:

"I just listened to your radio program on 'Twilight.' I am a huge 'Twilight' fan. I have been obsessed since March of 2009. I have promoted it inside and outside of my church thinking it was just a good love story and an escape from reality. I am a pastoral assistant at my Baptist church and I serve on many committees. I am a born again Christian.

"I thought I would listen to your radio show and dismiss anything that you said. Instead, I am sitting here second-guessing myself. How did I fall in love with these books when I deemed Harry Potter demonic? It bothered me when Bella would discuss her soul, but I pushed that to the side and moved ahead. Now I understand that it was God showing me that these books and movies are not what a Christian should be participating in. Thank you so much for opening my eyes."

Shannon Marchese, senior editor for fiction at WaterBrook, says that while the goal of Christian publishing isn't to emulate worldly trends, it's important to critically engage what consumers are already reading. She says, "Christian vampire fiction allows readers to experience the mythology in a new way." I think she means if something is selling really well, let's offer folks more and more of it and further cash in on the craze.

So, can we find God in all of this? That is, in the books, movies, reviews, discussion questions for church youth groups (yes, you read that right). Harry Potter fans will point to god-like images and comparisons all throughout the book series, so why not see God in Twilight, too? Beth Felker Jones writes in her book, Touched by a Vampire: Discovering the Hidden Messages in the Twilight Saga (Multnomah 2009), that what is the most worrisome issue is that the books and movies are full of spiritual themes.

Twilight deals with the longing human beings have to be transformed, to be set free from our limits and weaknesses. She says, "All of this could open up quite a conversation about the gift of salvation." Oh, really? I guess I'm not connecting the dots but admittedly I don't want to! Come on now, do you want to equate salvation with vampirism? Just the opposite is true in the books and movies. Bella is willing to sell her soul (and thus her salvation) for Edward.

Eric Barger states in his article/brochure that "Twilight" has been defended as a positive book because it contains no sex, seems to preach abstinence, and includes only mild swearing. He states, "This is simply a lesser-of-the-two-evils approach and while I readily admit that this romantic-styled chick flick is far less ominous than a large number of the books and movies out there today, how can a biblically-minded Christian endorse it as acceptable for a 12-year old?"

Barger says, "No matter how dreamy Hollywood may present Edward Cullen (the chief vampire) to be or how obsessed some junior higher may become with him, Twilight is nothing short of Satan's cloak of evil appearing to be good."

He concludes, "Until the final battle has been fought and the Lord has come with His everlasting and perfect peace, Satan will attempt to prevail through manipulating those whom he may. Stephenie Meyer is just one in a long line of those to whom, without their understanding it, the Evil One has paid big money for their services. Twilight is more than mere entertainment. To some it has become every bit as important and as captivating as a religion."

Never in my lifetime have we had to contend for the faith 24/7. What was once blatantly evil is suddenly ok. Spiritual applications can be made from worldly scenarios. Up is down, down is up, right is wrong, wrong is right, and we're all drinking tea with the Mad Hatter!

This sounds like what might happen in the last days. Are you listening for the sound of the trumpet?

The Trouble with Twilight - ChristianityToday.com

Bringing Twilight out into the Son - Take A Stand! Ministries (Eric Barger)

What does the Bible say about vampires? - GotQuestions.org