Much has happened over the past few months. Crucially, the tide is shifting from one extreme to another. Beginning from the panicked financial lows of late 2008 and March 2009, policymakers and Wall Street had been ferociously attempting to blow air into the collapsed balloon. 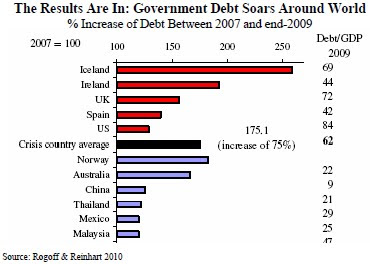 They surely gave it a hefty effort. The result - as this chart clearly shows - is that government debt around the world rose on average by 75% in a period of only 2
years. Yes, that is not a typo. It reads seventy-five percent … over 2 years!

While this statistic is no surprise for anyone who has followed the day-to-day developments of the Global Financial Crisis (GFC), it represents an unmitigated disaster that is simply stunning in its scope. The gravity of this development cannot be overemphasized. The major reasons for the debt increase were unprecedented government funded economic stimulus programs, financial bail-outs and guarantees.

These are certainly fast-changing times … both obvious and subtle. We have certainly covered the most obvious. While we had developed some 7 scenarios that could possibly play out over the next few years (with so much uncertainty, anything could be possible!) recent events raise the probabilities of a more deflationary outcome over the nearer term horizon. I will explain why shortly. However, let’s first consider the tenor of recent events and trends.

Critically, Paul Volcker is back on stage, side by side with President Obama. This is a meaningful signal. Previously, this veteran central banker had been frozen out by the younger members of the Obama Economic Recovery Advisory Board. (Volcker is well into his 80’s.) If Mr. Volcker’s policies are now followed (as consensus now seems to indicate), it will be a deflationary influence. The banking industry will be curtailed, shrunken and unbundled.

While bankers are not well loved these days, and no one will be crying for them, these government incursions into private industry will throw a wet blanket upon commerce overall for some time. Volcker’s recommendations are sensible. It’s just that removing a 100 pound tumor from the “body economic” is a dangerous operation, drawing enormous blood supply.

Also, it is now well known that insiders on Wall Street were net sellers over recent years of their ownership shares in financial firms. They did know that crazy things were going on, and reduced their personal risks accordingly.

Next, the AIG investigation is gathering steam as it should. The biggest corporate give-away by the U.S. government in history occurred. Yet, the monetary alchemists thought it best — in their elite view — that the public should not know the details. Actually, bailing out AIG was really about bailing out some key Wall Street firms whom AIG owed money. At last count, the U.S. government has funnelled some $180 billion into the AIG unwinding. These bankers that had their counter-party positions made whole (at 100% on the dollar, no less) are now again paying themselves big bonuses. In part, not surprisingly, this has caused a bit of a backlash. While, national unemployment stands at 17.5% (employing the classical definition) and the net wealth of households having collapsed, Wall Street is perceived as eating cake.

Recently, the loss of the Massachusetts seat to the Republicans now signals that new government spending bills will be stymied at every turn. Already, the Obama government is announcing spending pull-backs. While these cuts are very minor to date, it nevertheless represents a significant shift in policies.

At this point, there are no easy solutions. Past mistakes have their unavoidable legacy … and require their respective penance. That partly explains why the tough phase — the “cold turkey” stage (as it will feel) — is still ahead. Once the drug addict is weaned off the narcotic — in this case, debt expansion and government deficit spending — the colds sweats and cramps of withdrawal begin.

The bottom line? “Money manager capitalism” is out. The piper will now be paid and the times likely to be dangerous and volatile over the next few years. While I will certainly keep probabilities open on an inflationary outcome longer-term (and not entirely discount this scenario), for now it looks like the balance of evidence is shifting towards the deflationary side. There are a number of contributing factors, in addition to the political tide changes already mentioned.

Firstly, all of history argues that maniacal booms which are fed by a debt explosion eventually succumb to the malaise of over-indebtedness. The handmaiden to these grand trends that can play out over a series of decades, is a widening and extreme wealth skew. This is usually the final nail in the coffin for great countries. A high wealth skew means that debt quality deteriorates and economic growth slows as much productive resources gets progressively siphoned off as interest costs. As such, the toxins of debt eventually kill off the debtor. Just as in a wine vat, the accumulation of the waste products of fermentation (ethyl alcohol) eventually kills the yeast. 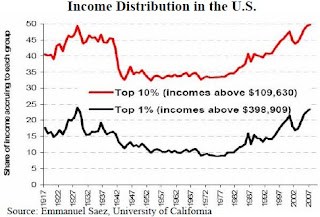 America now indeed has a massively imbalanced wealth skew. The top 1% of households may now own 45% of total wealth according to some unofficial surveys. The graph to the right shows one estimate supplied by the University of Columbia. The trend is clear. In fact, the U.S. now has a wealth skew that is fast approaching that of some Latin American nations.

Yet, it is true that sometimes great hyperinflations have also ensued from reckless periods of monetary malfeasance. But this time, such an outcome is unlikely for some key structural reasons … at least for now. For one, the western world, including North America, is in an aging crisis. People today are poorly prepared for retirement, especially after suffering significant losses in their net worth throughout the recent financial crisis. Both retirees and pension funds are starved for income, especially with interest rates being so low. Secondly, today we have structured and large bond markets that are highly reactive to inflation. As such, bond markets (though also vulnerable to bubbles at times) act as an inflation regulator.

Given the recent change in sentiment, the sacrificial lambs are being lined up. How far this process may go, no one knows. However, there are some dangerous elements to fear. First, consider that there has been such a massive collapse of the U.S. middle class that respected analysts are openly pondering the thought that it had all been planned. Albert Edwards, who is the Chief Strategist for Societe General, openly writes:

“Some recent reading has got me thinking as to whether the US and UK central banks were actively complicit in an aggressive redistributive policy benefiting the very rich.”

If the economic times become more difficult for America over the next few years, could there be public revolts … even open anarchy? Japan, despite suffering a deflationary period for nearly two decades following its financial bust, kept calm and organized. Society did not fracture. But then again, Japan’s, wealth skew was mild compared to America’s.

Christians who take a literal pre-millennial view of Bible prophecy, will also want to be alerted to the ongoing and future fate of the Jews. With Volcker back on the scene, even in his non-executive capacity, the Gentiles can be seen to be taking top influence of the U.S. monetary structure. After a consecutive set of Jewish federal reserve governors (Alan Greenspan and Ben Bernanke, who clearly presided over an era of monetary mayhem); several Jewish Treasury Secretaries; the Obama economic policy team also visibly staffed with a number specialists who are Jewish, the change in tide could be ominous.

Please stay on the look-out and do not fall prey to demonic anti-Semitism. I encourage you to read Chapter 10 entitled Jews, Gentiles and Money in our recent book Global Financial Apocalypse Prophesied to get a balanced explanation of this unfortunate and long-running dynamic.